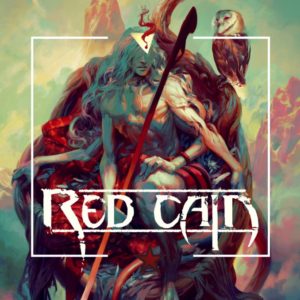 There are too many bands within the progressive metal sphere that desperately want to be Dream Theater. Why, in the name of sanity, would musicians think that ten minute fretboard masturbatory noises and rhythmic histrionics would represent the apex of such talents? It’s bewildering to say the least, especially considering Dream Theater’s abominably boring live “shows”. With this in mind – and so much progressive metal leaning towards the unlistenable because of it – it’s refreshing when a band comes along that appreciates the necessity of a reasonable chorus and knows that shorter track lengths are necessary if a wider audience is to be reached. Calgary’s Red Cain are one such band. The spectrum affected purists might dismiss some of this debut EP as just metal, or alt-metal, but these four songs take in a variety of moods – and the forays into instrumental complexity, albeit without self-indulgence, still places them within the progressive bracket.

‘Guillotine’ presents a full throttle, head first plunge into the band’s brand of melodic progressive metal. The track’s main riff is chunky as hell, with dual guitars ploughing through a sound that combines the more accessible elements of Kamelot with the alt-metal drive of Avenged Sevenfold. While there are lots of flourishes from different influences throughout – acoustic touches, industrial drum triggers, synthesized blasts of darker keyboards – even neo-orchestral waves of synthetic strings – it’s the main riff that carries everything. With an enormous and multi-tracked sound, Nik Ryzenkov’s six strings never abate, which means in turn vocalist Evgeniy Zayarny is left with the unenviable task of making his presence really felt. Luckily, he has a big enough voice to pull this off, even though his somewhat boisterous and accented delivery takes a while to settle in. It’s a huge and bombastic number, but also shows these guys to be good players throughout, so overall, this provides a good first impression. On the flipside, ‘Unborn’ takes a simpler approach, working with the more gothic influences which originally brought the band together. Dark riffs, hallowe’en inspired keys and a slow, pounding drum make up the bulk of the music, with the progressive elements left to huge blankets of keys and almost tribal drums. All the while, Evgeniy croons and wails with the presence of three vocalists – his voice is both bombastic and perhaps a little overbearing, yet totally suitable for the job in hand. Even with flaws, he’s twice the vocalist that James LaBrie thinks he is. As this tune progresses, the simple and heavy riff becomes more dominant, but for those looking for something more melodic, the closing passages really catch the ear, as clean and soaring guitar lines really add something to a track that could’ve perhaps moved a little too far towards the stodgy. While not always carrying so many of the more typical prog metal traits, it’s got a definite presence musically speaking…and, most importantly, is well played.

‘Dead Aeon Requiem’, meanwhile, opens with a softer mood, with a slight influence from ‘Promised Land’ era Queensryche, before moving into a heavy riff where multi-tracked guitars work a mean melody over a crushing sound. Like the most melodic Symphony X, there’s a lot to take in – it’s a proper kitchen sink affair. The aching Queensryche sounds fill out the bulk of the following verse, thus allowing the better elements of the vocal to take hold, but its on the moments after that where the tune settles into its stride, mixing everything together,with a very Euro sounding, theatrical prog metal approach. The bass is great in the way it bolsters the occasional pneumatics; the guitars appear to be concerned with three melodies at once to make everything as big as possible (but still never going the most obvious Dream Theater route, thankfully) and the vocals are easily the EP’s best.

Picking up both the tempo and some of the progressive elements, taking everything into consideration, ‘Hiereth’ is the EP’s surefire highlight. Kicking off with a very impressive rhythm dictated by Rogan McAndrews on the bass, the tune quickly escalates into a heavy workout, where the drums switch between a light almost indie rock presence and some very heavy rock tendencies. The use of bass drums reinforces the heavier parts without being overdone, while a chunky guitar riff covers all the bases with ease. Throughout the track, Ryzenkov takes centre stage, hammering out various fretboard-tapped motifs and melodic muted riffing, even dropping in the occasional NWOBHM influenced flourish. Underneath everything, determined not to become surplus to requirements, keys man William Lancaster interjects with occasional folk metal melodies – very unexpected given the main thrust of the tune…and a very nice touch. All told, it’s a great slab of melodic prog metal, provided you can attune yourself to another big vocal performance.

This EP is huge sounding and can occasionally be hard going if approached in the wrong mood. However, the playing is more than solid throughout and the four numbers present four different enough styles it to give a genuine feeling of a band not wishing to get stuck in a rut, which is a genuine asset. While possibly too proggy for the traditional metal crowd, Red Cain are definitely a band who inject a little more accessibility into prog metal. And that – of course – can only be a good thing.