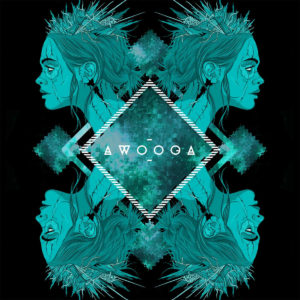 Sheffield’s Awooga play music with a dark soul, but it could never be tagged gothic. Their music has a doomy heart, but it’s not straight up doom metal. It’s progressive and can be heavy, but never in the half-arsed way that three thousand Dream Theater wannabes think is acceptable. If you were to try and pigeonhole them, the closest comparison would be to liken them to a hybrid of Amplifier and early Deftones. The Amplifier-ish elements within their heavy and wandering arrangements probably went some way to scoring the band support slots with Amplifier themselves even before they’d released any studio material. How they got to support the Soft Machine obsessed Knifeworld, on the other hand, is anyone’s guess…

Their love for Deftones (especially parts of 1995’s ‘Adrenaline’) couldn’t be more obvious during the EP’s opener ‘Thief’, which crashes in with a slow and laborious riff, heavied further by a touch of distortion in a similar way to the Deftones’ own ‘Bored’. Once Tam Ali starts to sing, there’s more of a similarity, too, with his preference being a sound that hovers somewhere between a croon and cry, with the finer points of the lyric being masked by the bottom end riff. As the riff crawls along, there’s an overwhelming familiarity, yet at the same time, James Borrowdale’s lead guitars lend a strong melodic air that lifts this tune far above a mere Deftones homage – and in terms of allowing different elements to creep in an out of these five and a half minutes, they’re far more appealing than Deftones could ever hope to be. As the slow riff presents itself for the last time and the narrative fades out to the strains of fuzz lead bass, it’s been immediately clear that these guys have a clear idea of the sound(s) they wish to make.

…Or do they? Stoking up various guitar effects and echoes, ‘On Intermission’ is much lighter. It’s just as slow, but stripped of the heavier parts, we get to hear Ali’s impressive bass sound colliding with various lead guitar effects, occasionally reminiscent of Amplifier and a couple of other more inventive prog-metal practitioners. The stripped back sound is the perfect companion to the quiet vocal, while rattling rhythms and odd popping noises drop in and out of the stoner-ish vibes with Tool-like precision. Ushering in a classic doomy riff at almost the mid-point, Awooga shift from progressive tendencies to become a power trio in every sense, cranking one of the EP’s heavier riffs while still managing to keep a close ear on the spacy vibes. Once they make a full return to the original melody, it hooks in the listener just as well as before, this time allowing drummer Taran Ali to throw in various flourishes. With several bars of heaviosity to finish, the vocals rise and the Deftones influences are more obvious, but if this mix of heavy and progressive is the best representation of Awooga’s talents, they’re certainly on the right track. Keeping a quirkier edge at first, ‘Where The Others Go’ opens with drone guitar parts and a busy and almost tribal drum line. Although fleeting, the influence from Tool within the arrangement is an unavoidable one, while the vocal steers everything towards a doomy, post-grunge sound. This allows Tam to deliver his finest and most varied vocal this time out and, all the while, those drums shift back and forth between a heavy beat and tribal quirks. There’s a real beauty in this slow and heavy number, where Awooga explore their love for Tool, Deftones and more, yet give a sense that, in time, they’re more than capable of taking these sounds into new places. A quasi-melodic chorus, a dark soul and a bluesy guitar solo add further to the already great arrangement. It isn’t necessarily always as progressive as ‘On Intermission’, but looking at these two tracks as both parts of a whole, there’s some wonderful listening to be had.

‘Faultline’ works a riff straight from the same root as the Deftones inspired opener, bringing another weighty riff. That riff and semi-repetitive hook works the trio fully in terms of both heaviness and tightness. It isn’t just a case of “if it ain’t broke, don’t fix it”, however, as this number tempers the heaviest parts with extended workouts. Guitarist Borrowdale gets to weave leads with higher registers throughout the instrumental sections as well as lay down a more alt-rock distorted and chiming sound to great effect. Whenever the band hits their stride during the heavy parts, its impressive – and surely more so when heard live – but the track’s second half, featuring an extended interlude which includes quiet and thoughtful noodling, a barrage of ringing guitars and building rhythms (thus accentuating their progressive leanings) is where they’re at their finest.

Whether going for the minimalist and atmospheric, the progressive or the heaviest of riffs, Awooga are always enjoyable and surprisingly consistent. They really seem to understand the need for allowing melodies to sit at the heart of whatever they do – no matter how heavy – and even when they’re most obviously channelling the Deftones, they manage to be twice as appealing as that best selling band (best described as overrated dirge makers). If you’re looking for something heavy, something with a good buzzing bottom end but a sidestep from the Sabbathy norm, it should go without saying, but ‘Alpha’ should more than hit the mark. A cult classic in the making.