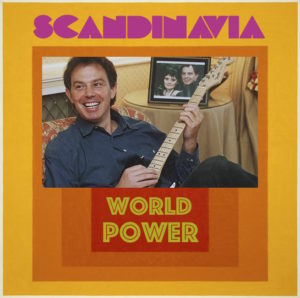 London-based indie rock conglomerate Scandinavia are an odd bunch. When they liken themselves to both The Replacements and Hall & Oates and then confront you with music that sounds like neither, well, it’s an interesting proposition to say the leasy. Maybe their own self-chosen comparisons aren’t meant to be direct references, but rather more to assure you that their musical boundaries are wide open – which they very much are: their fourth studio album, ‘World Power’ is nothing if not eclectic.

Throwing the listener straight in the deep end, ‘Dead Air’ starts as Scandinavia means to go on, with sirens, political news samples and a repetitive electronic loop that sounds like a Pete Townshend ‘Baba O’Reilly’ homage played with a DIY aesthetic. Then, following the brief threat of vocoders, something magical happens. ‘Ideology’ breaks through the noise with the aid of a loud snare drum and introduces more conventional instrumentation as well as a quirky rhythmic style. Soon enough, there’s a confident tune blooming from within potential chaos, as if the lads from Vampire Weekend came in to jam on a Third Eye Blind classic. The drumming occasionally sends things off kilter, but behind everything is a very melodic alt-pop/rock arrangement. The complexities – as well as the shiny style – occasionally remind of the harder work in the New Pornographers back cat, especially in the way a wordless harmony weaves in and out of the guitar lines. Atop some superb indie rock guitars, the lead voice carries an important melody, very much in the style of Stephan Jenkins circa 1997. It should be a mess, but somehow the band really pull it off. If any of that somehow makes sense, then it’s very much worth persevering further.

Chosen as a pre-album release single, ‘Chandler Bing’ is a quirky indie-rocker that pays homage to a nineties sit-com legend. Hard edged power pop is very much in evidence, with a selection of ringing guitars and indie-pop vocals, peppered with harmonies that uplift. The tune’s driving force comes from tough chords and chopping verse rhythms – much closer to earlier the new wave than the sub-Weezer sounds of so many lesser imaginations – and the multi-layered voices very much carry everything off in style. Although simpler than some of Scandinavia’s work, it’s still rather busy and each listen brings something different to pick out, whether it be the understated shimmering guitar parts that cut through in various places, the well structured bass, or the various samples of Matthew Perry himself. Whoopah!

A number which turns even more towards the tuneful, at least in places, ‘San Pelligrino III’ delivers some superb Dan Bajar-esque chopping riffs set against a summery vocal line that comes across like a twisted marriage of Soul Asylum with Kirsty MacColl on backing vocals. What could have been a superb straight up power pop outing is given a Scandi-twist by the presence of an atonal lead guitar and other off-beat elements and is a reasonable listen, before the hipster-meets-slacker vibes of ‘Intelligent Hip Hop’ threatens to derail the entire LP. This track lurches through various moods: there’s Third Eye Blind-esque indie rock, Go Team inspired rhythms, a touch of rap and a bit of funk, all before a twanging guitar lead ushers in smooth and soulful vocals and a smidgeon of brass. A very familiar sample suggests “this is jam hot!”, but it’s bordering on chaotic – given Scandinavia’s unrestrained approach to making music is turned up to eleven here, it really ought not be as appealing as it is.

Rather fitting for the political climates in which this album was written, ‘Strawman’ stirs up emotions by suggestion that the world is moving too far towards the volatile: a case of express an opinion, hit send and stand well back in a pre-election scenario dominated by a conjoined world of throwaway electronic links. The more serious message is counterbalanced by some great spasmodic musical elements. The bass playing is superb – with everything else revolving around a central funky sound – while the high toned guitars noodle a pleasing indie-ish melody. The vocals, meanwhile, alternate between sneering and spoken or huge bellowing affairs, adding further to the general melee. At the other end of the scale, ‘Leisure Rules’ brings the happy with power pop cool, with a selection wordless doo-doo’s and a carefree vibe that could have sprung from the hearts of the underrated Farrah, all beneath a chiming slice of guitar that paves the way for an optimistic vocal and the presence of brass. A three minute gem, this is a definite highlight, a touch of sweetness found within a bag of assorted and sometimes sour treats. And just as you thought these guys couldn’t get any more eclectic, ‘SexLife’ borders on synth-pop. It’s not straight, of course; the 80s influences come with a knowing post-modernism and the mechanised heartbeat sounds even better once clean guitar lines chip in. It’s like OK Go discovered ‘Everything’s Gone Green’ by New Order – and although, perhaps, it’s an oddity among the album’s more cluttered arrangements, as a standalone piece, it works just fine.

Nearing the end of the album, ‘True Crime’ steps back from the many layered approach and opts for more of a straight power pop angle. The increasing focus on vocals makes it hard not to draw comparisons with New Pornographers once more, while occasional darker elements and a storytelling vibe lend occasional hints of Hello Bear. While the vocals are very likeable, it’s a few elements within the music which win out, especially at the end of the number where a gentle guitar weaves a repeating melody and sounds of dark wheezing sax add a very atmospheric bent. Ensuring this album comes with a busy and memorable indie workout to finish, ‘Our Last Song’ reinstates those influences from Third Eye Blind, adding a flourish from Gene and then sets about juxtaposing the upbeat music with a tale of travel, of leaving and of the aforementioned last song heard…or something – the busy approach makes some of the finer points of the tale hard to make out, but for fans of 90s infused indie sounds, this track will soon become a favourite.

‘World Power’ is an interesting listen throughout, combining math rock complexities with indie rock melodicisms to create a distinctive, multi-layered sound. Hearing this is sometimes like hearing Tubelord reimagined by band with an understanding of actual hooks; more often like experiencing elements of Gene crossed with New Pornographers and some half-remembered 90s should-have-beens. If you are able to get your head around the more off-beat elements and hook yourself into the more rapturous melodious aspects, it’s an album that could just keep giving. Approach with an open mind for best results.