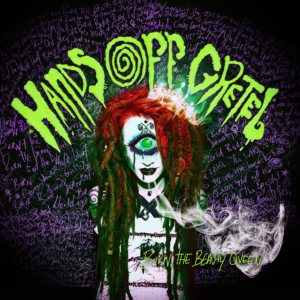 Image wise, maybe the band tries far too hard and although their music is somewhat unoriginal, it’s played with love (no pun intended). With that in mind, is it perhaps wrong to want total authenticity in an age where we’re overloaded by a music media and almost drowning in a glut of new bands and releases every week? The fact that Hands Off Gretel have actually been noticed when others have been left to drown in the endless noise certainly says something about their retro sound and talents. And the fact that Garbage queen Shirley Manson loves them perhaps says even more…

‘Always Right’ represents the band’s sound at its most typical, thanks to a sharp riff powering the verse with muted guitars, as overdriven elements reinforce the buzzing edge of the guitars. The bass, too, is hard pumped and plays a huge role in giving the tune energy. Tate, meanwhile, mumbles and roars in equal measure, like someone who’s studied every note and every nuance of the Brody Dalle catalogue, soaked it in and is now recycling and regurgitating the best parts. The softer side to her voice on this track is just about audible over the grunge-punk riffs, while the louder moments present on the chorus really accentuate a combination of sneering and yelping stroppiness. It scores a fat zero for originality, but yet manages to be far more exciting than anything from Dalle’s own 2014 release, the Josh Homme spoiled ‘Diploid Love’. Slightly grubbier, ‘Oh Shit’ plays out like a Nirvana b-side – all fat basslines on the verse and a huge crashing chorus dominated by throaty, drawling voice – and as such represents one of the times that Gretel’s music is at its most unimaginative, smothered in a cloak of noise drawn by clichéd ghosts of a Seattle past. It’s somewhat impressive that this band can take something so familiar (and by terms generic) and still make it sound relatively energetic, even if it never really sparkles. ‘One Eyed Girl’ is a huge improvement on both of these tracks, given the edge via a verse that powers like great garage rock that’s tempered by a Krist Novoselic bassline. During those verses, Tate drops in the title as a hook as often as she’s able, though never seemingly forces the issue; her voice is more melodic than before, tempered by a harmony and some reasonable choppy guitar lines. The chorus is where it really hits, though, as the band tap into something that’s every bit as good as the best parts of Hole’s career defining ‘Live Through This’, all before embarking on a slower more intense riff that sounds like a mutation of Novacrow and Tad. If there’s ever a nugget that shows the Hands Off Gretel musical ethos in a near-perfect four minutes, this is surely it. Original it ain’t, of course, but there’s enthusiasm and energy…and in this case, that’s enough.

‘World Against She’ starts with a thin guitar sound – borrowed from about thirty old Nirvana tunes – but quickly moves into a hybrid of noise that owes as much to Mudhoney as Hole or Nirvana The drums are heavy on the toms, lending a strong backline, the twin guitars careen across everything with a brilliant garage-fuelled sloppiness and all the while, Tate screeches and bellows in her best Courtney guise. Hearing this is like a trip back to ’94 and although musically, it seems a bit predictable, thanks to a screamer of a chorus that appears to confront world through an angry nineteen year old eye, its main hook is both strong and relentless. ‘Queen Universe’ is even more shameless in its adoration of both Love and Dalle, but the raging chorus is a fine example of the style and an occasionally stuttering vocal adds an essential quirk. Sections including a soaring guitar line and wordless wails seem a touch out of place with the sharper parts of the number, while a lyric tackling sci-fi themes is similarly unexpected. Whether intentional or not, these moments set Tate apart from the heroines she slavishly sets out to imitate and allow just a bit more of her own character to push through the cracks. Can you imagine the then recently widowed Courtney Love singing about spaceships in the summer of 1994, or even L7 managing to lend one of their one line choruses themes of alien invasion? Thought not.

Bringing everything down to a slower and more low-key mood, ‘Push The Girl’ trades in a couple of the old Hole-isms for more of a dark vibe. Here, Tate perfects her mature Brody Dalle drawl, using her voice to create a slightly unsettling mood, allowing the more melodic side of the performance to carry things through. While other songs might be more exciting, the contrast between a bellowed chorus and the subsequent wordless harmony is rather pleasing, while ‘Teethin’ brings back a much bouncier sound, fusing sub-grunge moods with muted guitar riffs, resulting in verses that come across like a Seattle infused Weezer. The full range of Tate’s voice is unleashed; from sweet cries, to mumbled moodiness she eventually works herself up to a screaming riot grrrl chorus. Or what passes as a chorus, at any rate: given the attention to the verse, this one line shouter sells the track short. Never mind – the riffs are always great.

A fifties twang asserts itself during the intro of ‘Eating Simon’ and it would be interesting had the ensuing track added a bit of a horror punk element to proceedings. Sadly, it doesn’t. This track, despite a different quirk to start things off, all to quickly becomes a Hole by numbers workout. Again, the general presence and volume in Tate’s vocal hits the mark, but there’s much less of a song here and by the mid point, it’s obvious Hands Off Gretel have displayed much more enjoyable musical wares elsewhere on this album. Stoking up the horror vibe, ‘Plasters’ makes a big feature of off key piano notes and a creepier vocal and the way the track builds from eerie quietness to a Bush-like blast of a riff comes across as very natural. Multi-tracked voices fill a lot of space; the dirty guitar riffs straddle heavy beats and the eventually busy alt-rock has a theatrical cheekiness that suits the band very well…and it’s pretty cool. That’s more than can be said for ‘Little Man’, however, which by comparison is a plodding sub-Nirvana dirge that totally outstays its welcome. Quieter, spookier parts bringing forth a great bass sound shows that there was possibly a great idea in here somewhere, but a boorish chorus that just involves a lot of overblown screaming represents one of those times where most of Nirvana’s ‘In Utero’ seems like a lightweight listen, or even makes the Melvins seem as textured as ELO. You can’t win ’em all, as they say, so it’s lucky ‘Burn The Beauty Queen’ has so much good material to help balance out missteps such as this. Closing this thirteen track recording, ‘Awfully Miserable’ attempts to capitalise on more wonky, sneering sounds by beginning with minimal guitar, but soon enough there’s a massive riff that sweeps everything aside with the force of a musical bulldozer. The production values really amplify the crushing bottom end and Sam Hobbins’s drums are heavy and tight. As with ‘World Against She’, the toms sound superb and as the whole band throw themselves into a world of Seattle-based obsession one last time. Harder, louder, angrier – they really sound as if they mean it.

‘Kill The Beauty Queen’ mightn’t show the same unhinged fury of the young Kat Bjellend or capture the absolutely scary visual and musical art scrapings of Katie Jane Garside. And, yes, you could play spot the influence until Kurt rises from the grave, but when all’s said and done, Hands Off Gretel show a heart-filled love for the genre. People always want to hear music like this…for some, it’s cool and retro, for others steeped in the glow of nostalgia…and even if it all has been an utterly calculated exercise, Lauren and her band are far superior to the mostly forgotten Jack Off Jill. While Tate clearly has talent and a vision for her music and image, the feeling that it seems to come with a safety net can be a little disappointing at first, but once you get over that, though, and feel more able to approach these songs on their own terms, there’s a hell of a lot to like.