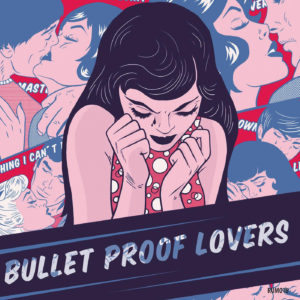 Since the release of his 2012 full-length ‘Brand New Beat’, Kurt Baker’s career has gone from strength to strength. Having gained a rabid following in Europe, he attracted the attention of various Spanish musicians and, it’s with them, he formed the Bullet Proof Lovers in 2014. Not only a brand new beat for Baker, but almost a brand new suit, as here he (mostly) ditches the skinny ties and eighties fuelled power pop for something more hard hitting.

Making up the rest of this impressive band are names that might not mean much in the US or UK, but are fixtures on the Spanish music scene. Guitarists Luiyi Costa (Txorlitöhead, Lolas Club) and Juan Irazu (Discípulos de Dionisos, Gran Yate Especial), drummer Joseba Arza (Brigada Criminal, Señor No, Ladislao), along with bassist Gonzalo Ibáñez (Nuevo Catecismo Católico, La Perrera) are all great players and each brings a new edge to Baker’s seemingly in-built knack for melodies (no pun intended). Between them all, the Bullet Proof Lovers very much feels like a band, as opposed to merely Kurt Baker and different back-ups.

Tapping in to the more raucous end of their sound, ‘Never Too Loud’ tears along furiously like an early Supersuckers workout, intercut with extra rock ‘n’ roll guitars. Thundering drums and a sassy twang are very much in order as Bullet Proof Lovers go for the jugular. Placing Baker’s more melodic lead vocal against a barrage of shouting backing vocals, this number really accentuates the rollocking and spirited side of the gathered musicians – a lightning in a bottle moment and an insight into why this musical union is so right. ‘I’ll Be Alright’ couples a Tommy Tutone-esque riff with some late 80s glam, on a tune particularly carrying an unintentional influence from Jetboy. Luiyi and Juan trade off sweaty guitar solos and both players have very different tones; Joseba shows off a taut drumming style and pretty much everything about this tune is as sharp as it is melodious. The appearance of a simple hook that invites audience participation is more of a garage rock variety than Baker’s own tried and tested 80s power pop, but both his voice and attitude are a perfect fit. As if hearing something from his ‘Play It Cool‘ cranked up, amped up and suitably scorching, it doesn’t fail to entertain.

‘She’s Gonna Leave’ pushes things even closer to garage rock. The twin guitars come over like a more tuneful version of The Hives, the drums churn out powerhouse grumbles between verses, while the main rhythm is unshakable. Baker steers a catchy as hell chorus through the chicanes of BPL’s energised riffage and in under three minutes, the band works up a storm and almost sounds as if they’ll combust. Tempering this with something more tuneful, ‘Breaking Down’ hits hard with staccato guitars and a meaty bass sound on a well-structured verse, before bringing a world of whoas to the fore on a chorus that could be one of the release’s best. Keen to mark out the distinctive difference between the BPL and a solo Baker once again, both guitarists step up to the plate to trade off smart licks. The solos here mightn’t have the same intensities as ‘I’ll Be Alright’ but, very much as before, they play well and provide great foils against Baker’s melodic ear. ‘Nothing I Can’t Do’ is retro both musically and lyrically, with Kurt waxing about PCP and switchblades – accentuating the throwback feel of the Lovers’ rock ‘n’ roll show – and a counter vocal on a brilliantly hooky chorus brings a sense of power pop cool without needing to add anything new, while ‘Leave Me Alone’ makes a much bigger feature of Gonzales’s bass work as he leads the band into a crashy, punky tune. Here, shoutier vocals very much exhibit the true spirit of the band before a sharp and fast lead guitar break blisters through a couple of bars knowing it’s been a job well done. In and out in just over a minute thirty, this track, perhaps more than any other, has a particularly live quality with a no frills and no flab appeal.

Those tracks may be appealing for both first time listeners and Baker’s established fans, but for that second group of people, however, disc closer ‘Master of My Destiny’ should assert itself as an instant classic. Beyond a slightly noisier intro, it is much closer in spirit to the Joe Jackson infused power pop Baker has made his trademark. There are a few more guitars than his solo albums afford, but these, coupled with a hefty drum sound serve up some great music. A semi-sloppy guitar solo is also on hand to remind everyone of the garage rockin’ Spaniards always pushing the tune forward apace, but a huge hook on a chorus always brings everything back to earth. Following an extended playout where call and response vocals make great use of the chorus hook by way of repetition, a cry of “fuck yeah!” really says it all. It’s evidently clear that this was meant for good times – and if you have half as much fun listening as the band so obviously had recording this, you’re in for a muy mola time…guaranteed.

This release captures some great retro rock and serves it up with some of the carefree fun and spontaneity of a side project, but without losing too much sight of the big hooks that have gone a long way to making Kurt Baker’s solo records so appealing. In short, you need this. The Bullet Proof Lovers won’t just help your party go with a bang…they are the party. Rarely has the phrase “have a good time all the time” been any more apt.

[Although available in Spain since 2014, this release was finally given a full US release on CD in 2016]