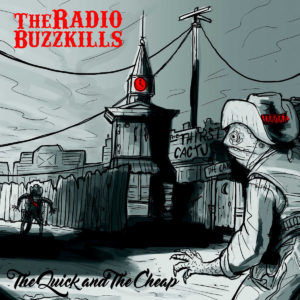 Do you ever find yourself harking back to the days of punk pop that actually sounded punky instead of shiny, emo or whiny? Look no further. In their own words, Saint Louis punkers The Radio Buzzkills sound like “a love letter to Screeching Weasel” on their 2016 EP ‘The Quick and The Cheap’. They’ve also shared stages with The Queers so, given those two facts, you’ll know exactly what you’re getting here…and obviously fun is very high on the agenda.

Opener ‘Zombies At The Mall’ gives a superb indication of the Buzzkills at their most ferocious. Kicking in with an “attention all shoppers” announcement, the band wastes no time in lurching forward apace with a riff and a melody that borrows influence from Screeching Weasel at their best (circa ‘My Brain Hurts’), while the guitar work is at once both sharp edged and sloppy. Gang vocals beef up an already raucous arrangement and the lead voice has a rough edge that could fit with any of the great 90s bands. Factor in a few shameless woo-hoos and fun lyric that surely pays homage to Romero and this sub two minute workout has a little of everything you need. Trading in horror schlock for harsh politics, ‘Wolverines’ explores a street punk style via amplified gang vocals and a sharp guitar lead provides a hard melody from the outset. Settling into a stomp, the vocals rarely subside and hard chords punch through a superb bassline to create a very full arrangement. The end result isn’t always the most tuneful, but those who fancy hearing a mix of old style punk pop crossed with something from the Hellcat label might get a kick out of the results.

With a choppy riff utilising both a punk and garage rock aesthetic, ‘Comatose Kiss’ delivers a guitar sound that could be that of the earliest Mudhoney at first, before teasing with a Stiff Little Fingers arrogance. By the time the verse takes hold, the arrangement is pepped up with a great guitar lead and rasping vocal befitting of a Nobodys record. In terms of fast and sharp punk arrangements, this is the EP’s best, but still doesn’t lose sight of what the band does best – and fans of Weasel circa ’94 will find lots to love. Somewhat of a sidestep, ‘Hamburger Girl’ tones everything down for a Ramones inspired 50s pastiche, where the guitar chords rattle slowly, the vocals attempt more of a croon and the bubblegum elements suggest more of a Kurt Baker Band b-side than anything Ben Weasel would be found anywhere near. The slightly atonal guitar style is in danger of wearing thin due to a more extended playing time and the vocal mightn’t be the best you’ve ever heard, but a cheeky seaside organ, some uplifting backing vocals and a slightly sneering spoken outro make sure there’s still plenty to entertain.

‘The Quick and The Cheap’s best moments are those where speed and guts really take precedence, (obviously) but in this quick hit, The Radio Buzzkills also show that they know their way around a history of punk…and their love for classic punk pop past creeps through almost every note. With approximately nine minutes worth of dumb fun powered by buzzsaw riffs and (usually) throwaway lyrics, this is definitely worth seeking out.