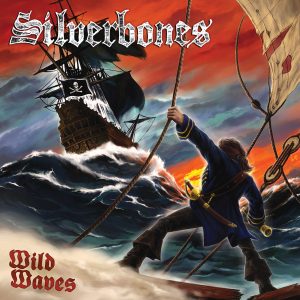 The questionable waters of “pirate metal” will always be ruled by Germans Running Wild, a band who took their concept to extremes and churned out albums for years. One of them even came with a warning of “loud sound effects” on the sleeve…and true enough, there were cannon noises loud enough to cause harm to many an expensive speaker set up. Other bands have attempted to cash in similar themes, but few – with perhaps only Alestorm worthy of a mention – have come close to creating such shiver-me-timbers silliness with such fervour.

Step forward Italian swash-bucklers Silverbones, whose debut release ‘Wild Waves’ is about as good as anything you’d expect from such a novelty based subgenre. On the basis of this release, they’re all really gifted players – albeit in a very 80s style – so, in some ways, it’s kind of worrying they’d feel that piratical poncing would represent the best use of their obvious talents.

…And predictably, our sea-faring sojourn begins with the sound of waves. The album’s intro, ‘Cry of Freedom’ blends these scene setting rolling waves with the gentle pluck of a guitar as if playing an old folk melody. Just as this takes hold, a loud electric guitar or three plays a very 80s riff. The multi-tracked sound is very well executed, but already with more than a quick whiff of the old sea dog. The title track follows with barely a beat missed, crashing in and capturing the kind of mood promised by that intro, at least musically. The drums thunder relentlessly – and without the aid of samples and triggers – while a jaunty 80s metal riff adds a great power. The muted riffs, hammered out at speed are augmented by a superb production job and some absolutely cracking solos, adding up to create everything you’d want from 80s metal (even by 2016). A great tune is set off-kilter by a vocal that’s forthright with plenty of whoahs, eventually dropping into a gang singalong where the melody appropriates various nautical jollies. Luckily, a few more top notch riffs and a great solo detract from the silliness, but for those afeared of Blackbeard’s ghost, that might not be quite enough…

‘Loyal Tyrants’ is a touch more grounded, with a forthright guitar part and some great drumming rimshots colliding (thus attempting to present the less embarrassing side of the theme), while more great solos unveil the band’s self-proclaimed love of mid-80s Judas Priest. The vocals seem intent on reminding us of the concept once more, but thankfully it’s a bit less pirate-centric. Marco Salvador unleashes a reasonable range, but his voice he’s no match for the guitars when it comes to the band’s best musical weaponry. This band is clearly dominated by his lead work which, when shared with Ricardo Galante, has plenty of power, presence and strong metallic melodies – at times, this might be enough to make this record stand up, regardless of the silly songs. The creaking of a ship underscores the intro of ‘Queen Anne’s Revenge’ which soon offers a strong melody that sounds like a cross between a sea shanty and something from Iron Maiden‘s ‘Seventh Son’, before a full compliment of drums and jagged guitars plunder headlong into a fierce rocker. The sharpness of the guitar work is more than commendable, the production values once again excellent for a small label release. The vocals are somewhat buried, but this is a plus since it sometimes helps suggest this is an old 80s classic and that parrots and peg-legs can be sometimes avoided. Reaching the track’s peak, what promises to be a great solo comes up a little short, but the general punch of the rhythm section makes up for that. Luckily, a little later, the previously expected solo appears with Ricardo and Marco trading off some faultless fretboard bashing. By the last verse and chorus, the increase in gang vocals means the sea faring aspects take over a bit too much, but at least up until then it’s been a solid listen.

‘The Undead’ slows down to a menacing chug and with a riff on loan from Judas Priest, Silverbones set about creating some real moodiness. Musically, this is spot on for the style; the guitars have a huge presence and the movements between riff embellishments and full twin lead are finely executed. Marco’s heavy accent means the lyrics can be avoided for the most part and the pirate aspects are even slighter than before, but there’s a feeling that it won’t last. …And it doesn’t. With a thundering, plundering anger ‘Raiders of the New World’ tells the tale of ships and treasure aplenty, with the titular raiders owning the sea. Musically, this cross between Maiden, Priest and Running Wild, means the classic metal elements are firmly in place and the band’s commitment is without question – and as usual, the best moments are in the hands of the guitarists whom, on this particular number, go all out to impress. If they could have placed their traded lead breaks into material that was much less of a novelty, they’d be up there with some of the best. Filling the next ten minutes are heady tales of trailblazing, hellblazing and wicked monarchs, all set to the band’s tried and tested musical themes before they wheel out the big guns of ‘Black Bart’, surely the meanest of them all? Not so much – beyond a superb intro of bouncing metallic drumming and a very loud lead guitar, the track descends into predictable swashbuckling dubiousness, the riffs far greater than anything they’ve been sent to power. The backing vocals are non-descript and compared to other tracks, the chorus is a non-event. It’s only the sheer gusto of the music that saves any face at all…and even though a couple of the best moments are likely to make you reach for a Maiden classic just as soon as Silverbones have finished this voyage…although that’s not necessarily a bad thing.

There’s good music to be heard here, but taking the pirate theme on board for all songs, there comes a point where Silverbones’ bravado and bombast becomes almost a parody. It’s probably not all meant to be taken quite so seriously, but after a few tracks – unless of course you’re absolutely pirate potty or nautically neurotic – the whole concept thing wears a bit thin. If you can look beyond that – a tough call, but just about possible – these tracks show the workings of a band who have a very strong metal-based talent. At almost every turn, the playing on this record suggests that these four musicians could unleash a masterpiece of classic metal, should they so desire; it’s such a shame that the eye patches have made them so myopic.