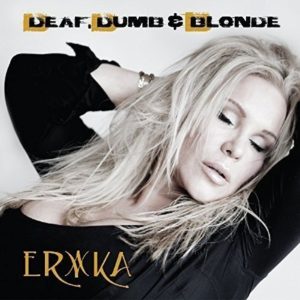 Erika’s voice belies her age, now having a rasp that comes from years of use…and it’s the kind of voice that if you heard it in a karaoke competition or singing in a pub, you might just about be impressed. Taking it as featured prominently on a supposedly professional recording, it’s decidedly average. Still, average is better than poor – and poor is very much the word when describing this album’s overall musical sound. It’s clear from the off that ‘Deaf, Dumb & Blonde’ was recorded on a meagre budget. The drums have no presence, bashing away with all the charm of a drum machine (at worst) or a man clattering on some plastic tubs (at best). There’s little to no bass guitar audible anywhere; in fact, most things aren’t very clear beyond the overly loud and sometimes dirgy guitars. It’s down to the songs to save the day – and sadly, aside from one or two tracks with just about passable moments – the material is also pretty bad, mostly ranging from the forgettable to the quite frankly piss poor. It’s also worth noting that for a supposedly melodic rock release, some of the songs come with a downtuned sound, very much the kind of thing some 80s hard rockers were toying with in the early 90s in a desperate attempt to stay afloat (usually with similarly questionable results; hey, Skid Row’s ‘Subhuman Race’, we’re pointing at you and laughing). Also, most of the songs really don’t have a lot in the way of anything memorable chorus-wise. In fact, everything about this album suggests it’s been sat on a shelf of rejects since 1993.

One of the album’s better tracks, ‘Drama’ has a muted guitar chug throughout, allowing the voice to take centre stage, while a sizeable arrangement gives the feeling that this could have been a demo for a Swedish Eurovision entry. It’s one of the few times that Erika’s voice doesn’t sound out of place; her cracked vocal actually increases the moodiness, before a big key change ushers in a reasonably big hook. The tune is better than the vocal, but even then, two or three plays is enough for it to start sounding stale. The album’s attempt at balladry, ‘Hearts Gone Bad’, also features some reasonable melodies, but is hampered by non-committal guitar leads and the need for a better vocal. Still, it’s easy to hear what the track should have sounded like…and in the hands of someone like Angelica Rylin, it might have been more enjoyable.  Also okay (though seldom more), ‘Killer’ has more of an edge thanks to a sharp keyboard sound and a couple of genuinely great riffs (albeit ones appropriated from Nickelback‘s heaviest outings) which, combined with a half-decent chorus and old fashioned guitar solo represents enjoyable rock fare, provided you can get past the fact that most of the recording sounds like it’s been filtered through a wet sponge.

That’s about it, though. There’s not a lot else that stands out within this release’s forty two minutes, sadly, as Erika and her hired hands either go through the motions recycling hard rock from the past without any real sparkle (‘Start Your Engines’), or worse still lumber through stodgy, faceless rock music (‘Warhoney’). An attempt at really heavying things up on ‘Suckerpunch’ results in four minutes of workmanlike sludge, ‘Us Fools’ is unimaginative balladry that could have come from the dustbins of any number of Euro hard rock acts and ‘Heroes of Heartbreak’ is decidedly average rock that sounds as if it never made it past the demo stage. ‘Sleeping With a Memory’, meanwhile, hints at driving hard rock of the Euro variety and has a reasonable riff played with some energy, but that’s tempered by bad keyboards and an iffy vocal (not to mention a couple of nasty, lewd sexual remarks), while the more enthusiastic ‘One For The Road’ – which actually benefits from a pleasingly buoyant riff and the feeling of fun – still doesn’t quite hit the mark due to another misjudged keyboard sound and more awful production values.

If all of that isn’t bad enough, dragging this sorry album into the depths of utter despair, ‘Go Down’ is truly painful. A heavy riff that recalls moments of Warrant‘s underrated ‘Ultraphobic’ album promises good things, only to then to not do anything interesting. A lack of pace means this feels like it goes on forever, while Erika’s time spent singing about her sexual activities is just crass and embarrassing. It’s not sexy; it doesn’t even qualify as raunchy…hearing this is like eavesdropping on something unwelcome, akin to hearing an old woman singing about blow jobs, and – obviously – once heard, it can’t ever be unheard. Alongside Jorn’s trashing of ‘Hotel California’, this is 2016’s strongest argument for the invention of mind bleach.

Comebacks: sometimes there’s just no excuse for them. Even with one or two fair musical ideas on show, ‘Deaf, Dumb & Blonde’ has almost nothing that can be genuinely recommended. Pretty much everything about this album adds up to create a carnival of cack. Honestly, just don’t waste any time listening to this pathetic drivel; it’s a wonder it was ever deemed worthy of releasing to the music buying public in the first place. So much for quality control.