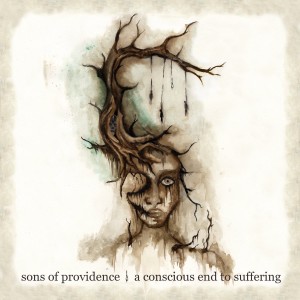 Looking at the minimalist artwork and bleak choice of title, you’d be forgiven for thinking this 2015 release from Arizona’s Sons of Provedence would be a doom metal affair, but straight up doom metal it very much is not. For this release, the three piece band twist in all manner of directions, from chunky metal, electronica and goth sounds, through stuff that sounds almost Nick Cave esque… While the music can change wildly from track to track – and often within those tracks – the overarching theme of the album is exceptionally dark.

To begin with, it’s hard to judge where things are headed at all, as ‘The Perfect Lie’ begins with a repetitive electronic ascending scale, accompanied by crooning vocals. Real drums beef the sound, but it’s got a feeling of being disjointed. Then the guitars make an unsubtle arrival, cranking out a post-metal riff to fill space. Despite being hampered by a limited production value, this sounds as if it’ll push the track forward in a more complete fashion, but it quickly reverts to the verse – which, on returning, sounds ever more like the singer from My Dying Bride wedged onto a Gary Numan tune. That’s not all, though, as the band then give up on that and churn out something that sounds like it’s had the unmistakable hand of Tool wave across it, as quirkier riffs back a mumbling, unsettling voice. Eventually dropping into a great alternative metal groove, Sons of Providence set about finishing this track with some hugely enjoyable rock sounds. While the production doesn’t give it the best send off, it’s worth noting that frontman Memphis Rourke’s vocal style has improved greatly compared to the band’s earlier releases. ‘Screaming’ – an instrumental – is even more low-key, spending time with a pulsing bass heartbeat, overlaid by clean-toned and minimalist guitar sounds. Even more stark is the approach to percussion: there are few drums to be heard, just occasional beats, allowing the bass to do the bulk of the work. The intermittent use of ride cymbal for effect is quite chilling, and even by the midpoint when the band decides this would all be better if they played everything a good deal louder, the sense of atmosphere is never lost, and with the final addition of scraping string sounds, it’s fair to say this is spooky, spooky stuff.

‘The Complex’ is rather more obvious in it’s musical route. The crushing guitars and slightly off-beat time signature are obviously derived from Tool and Deadsoul Tribe, which results in a great metal riff – the kind that never really gets old. SOP set about giving things their own twist by adding a layer of keyboards – more “noise for effect” than genuine melody and then top it off with particularly jarring voice. With a better vocal, this would have been the most accessible track of the six, but it’s almost like they made the vocal slightly out of step with everything else just to be defiant! Rourke croons and wails in an off-key manner, almost as if he isn’t taking things entirely seriously – something that’s very much a throwback to the band’s earlier works – but even so, the music is great. Zebulon Jessop’s drumming, especially, has a definite presence, giving the already hard edged riffs a real punch. For those looking for an easier “in point” to this album, ‘Wish’ could work rather nicely with as it teases with some obvious gothy moods. The use of huge piano chords in a slow progression recalls the icy instrumentals from The Cure’s classic ‘Seventeen Seconds’ album – and that alone is very much a plus point. Beyond a quiet and crooning vocal, piano and occasional plinking strings, very little happens for six minutes. With the belated introduction of a heavy drum, very much giving the last couple of minutes a boost, things then sound like a quieter Type O Negative interlude. The tempo remains unchanged – just slow and measured gothy goodness for all, until the band decides enough is enough around about the eight and a half minutes mark. It’s long, perhaps longer than some bands would have worked on such a simple arrangement, but somehow it doesn’t become dull. Maybe it’s the emptiness forcing the listener to become totally immersed in what is happening…or maybe this is purely and simply a superb goth throwback.

Repetitive drum beats and churning chords kick off ‘Inevitable’ – easily the most skippable track – to create a sub-Tool/post grunge tune, over which the vocals drone and wail in a somewhat displeasing fashion. With fewer quirks and more atonal elements, this is hard going and not a patch on ‘The Complex’ when it comes to presenting SOP’s metal influences, but is (almost) rescued by a great guitar solo featuring some equally great harmonic sounds. A pity that solo couldn’t have had pride of place in a better track. Still, most albums inevitably have their weaknesses…(pun very much intended). Any disappointment is quickly forgotten, however, since the closing number, ‘Conscious’, is terrific. Perhaps the record’s bravest composition, like ‘Wish’, it relies heavily on spaciousness for strength. With a lightly twanged guitar providing wisps of melody, this sometimes comes across as sounding the the soundtrack to a post-apocalyptic desert scene, as it’s relative quiet itself becomes disquieting. The vocals croon and crack like a Danzig ballad, while the guitars eventually find their place, twanging out a solid tune punctuated by ringing chords. Even the sporadic introduction of hefty mechanical beats – like a Massive Attack remix of a Trent Reznor classic – doesn’t lift the mood. It’s darkened, pulsing musical vein reels in the listener, and while quite different to some of the other tracks featured here, it has the potential to be ‘A Conscious End To Suffering’s most memorable offering. It’s a thoughtful way to sign off, ensuring that any prior missteps are more easily overlooked.

There is some very interesting material to be heard on this album. While the closing number obviously impresses due to it’s coldness and those big drum beats and ‘Wish’ will impress 80s goth lovers, your favourite track might just change with each listen, totally dependent on both surroundings and mood. In short, though, this album needs to be heard by anyone with an interest in all things of a downbeat nature, even if only the once. Bordering on forty minutes worth of bleakness, it’s not for everyday consumption, but just be glad there are bands still willing to experiment with those gothy sounds.