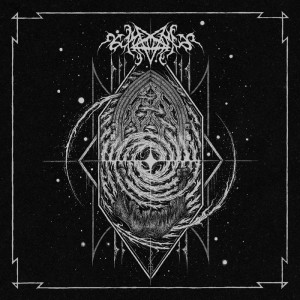 On ‘Dichotomy’, Exterminas’ third release – their second full length – the Italian extreme metallers take the basics of black and death metal sounds and shake them by their foundations. The guitars and drums still attack at lightning speed, the voice – if it could be called as such – veers towards the rather typical growl, and yet there’s something within these eight tracks which suggests at least one band member has a couple of musical interests within the classical sphere. You won’t find any orchestrated parts, though; that sense comes rather more from the way the guitar riffs occasionally leap from the more typical speed and into intricate tunes that sound as if they’ve been mangled from melodies centuries old.

That said, the album’s opener rarely messes with any such things. ‘God’s Hammer’ is indeed a proverbial hammer, designed specifically to pummel the skulls of both first time listeners and those who’ve followed the band’s career trajectory to date. Fading in slowly with a guitar drone, we already know it’ll be an intense ride, but once the drums make their rather quick entrance, there’s no turning back. This track pulls the best elements from early 90s death metal and the band’s performance – when primarily looked at from this angle – cannot be faulted. While it’s drummer Raven who dictates the speed and power, the most impressive elements throughout a rather epic and insanely heavy six minutes come from the performances of guitarists Eskathon and Moloch, who’ve constantly got a knack for a shifting melody. The metallic shimmer of a few of the riffs call out above the more obvious and thunderous thrashing, but upon reaching an instrumental mid point, there are even nods towards classic eighties metal (albeit played at absolutely blistering pace) and a very welcome, almost Egyptian, slant to the riffs. These leanings are brief – and, indeed, certainly too brief for those with less than a passing interest in such an extreme style – but provide just enough variety to suggest this release is potentially among the more interesting the death/black sub-genres have to offer.

With the second track, ‘Unleashing the Cruelty’, the band really come into their own. Via an extended instrumental intro, the multi-layered guitars drop into a very distinctive riff, it’s sound somewhere between trad death metal and something way more cinematic. The combination of solid chord structure and hard lead work suggests this would sound superb recreated by an orchestra. Although still very much within the extreme metal sphere, the melody is strong, and in the way Exterminas deliver it with such power, it positively crushes. Introducing Februus’s voice, he sounds more at ease than before and although parts of the music have a slightly muddy edge, it’s always possible to hear everything in surprising clarity. For the remainder of the number, the riffs alternate between thrash and death moods – both impeccably played, especially the odd Slayer-esque breakdowns towards the end – and the increased focus on lead guitar work is most welcome. The solos may be short, but they showcase works of great dexterity.

‘Collapse Into Time’ teases with a repetitive riff that could almost have come from the world of ‘Make Them Die Slowly’ era White Zombie (albeit with far superior production values) and boasts a mechanical mid-section that moves nearer to the tech-death sub-genre. Two distinctly different riffs joined together seemlessly, this shows the broader vision within Exterminas, and that would be enough to make this track a worthy listen, but that’s not all… In place of an expected lead guitar solo, things descend nto extreme doom, with a slow and oppressive riff coming from the speakers like a huge swamp. On one of the album’s heaviest moments, this music acts the perfect companion for the even deeper voice. A shame, then, that it’s so brief; with the arrival of a slightly unsure lead break, the speed intensifies and everyone powers over the finish line with pneumatic drums and shredding riffs in full effect – in all, a very complete arrangement. Less impressive, ‘Swallowing The Gravity’ punctuates death metal shreds with the kind of quirks befitting of early Voivod at first, before deciding that a firm marriage of thrash and death riffs will be enough to sustain five minutes – which it does, just – and ‘Upheaval Seems Anathema’ really hits the mark in terms of extreme thrash before tailing off with some spacious doom. With a cleaner vocalist, these tracks might have a good chance of reaching a much bigger audience, but from a technical perspective, they’re possibly ‘Dichotomy’s least interesting contributions. That’s not to say either one is bad, it’s just by this point, you’ll already have heard much better from these guys.

Taking things down about half a notch from full pelt, ‘The Apothesis of Pandemonium’ gets underway with a riff that borrows a little from late 80s thrash; twin guitars power through a harsh and speedy musical motif that could be an extreme cousin of Annihilator or Kreator, showing a tight musical unit, before moving onto something heavier. The arrival of a gruff vocal steers everything towards traditional death metal, with drummer Raven absolutely caning his knees as he thunders his bass pedals, punctuated by a tinny ride cymbal. At the point where this could become needlessly repetitive, the guitarists rise out of the swamp and shred a riff that sounds like a twisted version of Greig’s ‘In The Hall of the Mountain King’, before Raven gives that a kick up the arse with more frankly superb drumming. Chucking in a slower moment or two where the riffs are closer to Testament than Bathory is also a very smart move, making this near-five minute workout constantly varied and very entertaining. This is easily the album’s masterpiece and shows the full gamut of Exterminas’ abilities. Meanwhile, those who look for accessible melodies over power might get some enjoyment from ‘Wandering From The Death’s Shore’, a number where the band takes a surprising left turn into doom metal territory. The rhythm is slow, the double bass pedals kept to a minimum, with hints of Sabbath reinvented by early Opeth, this is a genuine riff monster, lurching slowly, only lifted by some very old-school leads crying out with tones that reach for the bluesy, but instead settle for cutting, proto-metal attitude. The slow riffs are complimented by a throaty growl, but even when slowed down, it’s fair to say Februus’s lyrical concerns aren’t always the most audible. Let’s just assume whatever he’s angry about, it’s very important. To finish, the lead guitars really come to life; the speed remains slow, but given a much broader canvas, Moloch and Eskathon seem to relish in casting out some classic and thoughtful metal shapes.

Not wanting to leave their audience on such a moody note, ‘The Dawn of Deceit’ brings back the speed and bluster, one last assault with the band showing their love for early Slayer and Death in the way the thrashier moments override the death metal grunts and barbarous drumming. In the way the twin guitars cut across the rhythm section, they sound sharp and brilliant, while the shifting time signature during the number’s second half – interspersed by clanging lead tones – almost brings the album full circle. While there are most certainly far more interesting tracks on the album than this, in terms of mood, speed and all round aggression, it’s a more than suitable closer.

A forty minute slab of brutality, thankfully tempered by some rather great lead guitar riffs, ‘Dichotomy’ is the work of a band maturing, growing in confidence and able to fully realise their musical potential. It’s a release that’s only really geared towards listeners with black/death metal interests, but even those with the faintest curiosity really should give this album a whirl. In terms of style, it’s rather fine indeed.