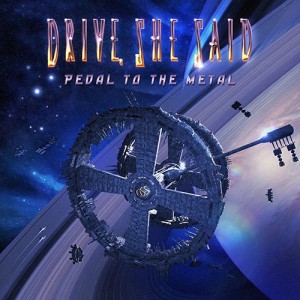 Looking at a few of the song titles on D,SS’s 2016 release ‘Pedal To The Metal’, it’s abundantly clear we’re heading into classic melodic rock territory, with some very familiar themes: ‘All I Wanna Do’, ‘In Your Arms’, ‘Pedal To The Metal’, ‘Writing On The Wall’, ‘Love Will Win In The End’… Sure, there are cliched song titles, but a few bars of the opening number, ‘Touch’ (a title that’s a nice throwback to Mangold’s past) should allay any fears that this release is all autopiloted fromage. It’s a bit cheesy in places, of course, but in terms of playing, the band sound inspired by the material and are often firing on all six. ‘Touch’ is a superb rocker with a tough guitar sound, its beginning chords sounding a little like a homage to the titular band’s ‘Don’t You Know What Love Is’. The verse settles into a chunky approach very quickly, but it’s the shameless whoahs that fill the chorus and a showy guitar solo that win out. Fans of Mangold’s keyboard sound should find some joy in a few places too, as he adds a stabbing melody with a very AOR slant from time to time and he’s also given space enough for a very seventies – almost Gregg Giuffria-like – solo of much bombast; enough to rival the impressive lead guitar. Keeping with the punchy rock, the title cut increases the speed and drops in a few top notch guitar breaks along the way. The chorus improves upon an already decent tune by introducing gang vocals that are particularly inspired by some old Tamplin works, resulting in an equal mix of power and melody.

Pushing the keyboards to the fore, Mangold widdles with glee during the intro to ‘Writing On The Wall’, a hugely pompy effort that blends a rocking riff with some theatrical vocals that could have been inspired by early Queen, Angel or any of Tobias Sammet’s overblown projects. They may be unashamedly grand, but some of the backing vocals on this album ought to be impressive, given the roll-call of voices throughout these tracks: most melodic rock fans would be right enough to be impressed to hear Ted Poley, Balance/Wiggybits man Peppy Castro, Goran Edman and Randy Jackson on hand. Aside from those pompy harmonies, this number has plenty more to give. The delight in recycling an old Rainbow riff is clear – you can almost imagine Joe Lynn Turner singing this – and, once again, the lead breaks are nicely executed. The drum sound could perhaps have been sharper, but you can’t have it all. ‘Love Will Win In The End’ mixes up a world of huge keyboards with a mid-paced riff and a genuine crunchiness driving a very melodic sound. There are times where it’s more than possible to hear the odd throwback to Mangold’s time with ol’ Mickey “two haircuts” Bolton (circa ‘Everybody’s Crazy’) and it occasionally feels like a retreat into a comfy and familiar pair of slippers, but it’s none the worse for that, especially with Fritsch seemingly relishing his vocal performance.

‘Said It All’ moves into Richard Marx ballad territory, it’s smooth radio-friendly rock guitars soaring gently against a reasonable vocal. The melodies are great, the guitar tones greater, but with a softer sound, the rougher edges in Fritsch’s voice are more exposed potentially making this a little weaker than some numbers. ‘Rain of Fire’ splices a theatrical intro onto a hard rocker which at first appears to be another of the album’s weaker tunes since it perhaps tries too hard on the chorus, thus making Fritsch push his range a touch too far. The vocal weakness is balanced out by a superb pre-chorus and a few chugging guitars that recall ‘Night of the Crime’ era Icon. Factoring in the kind of instrumental break that would impress the younger Ritchie Blackmore (or perhaps not), it eventually rescues itself and – although not D,SS’s best – it represents the kind of “big” sound that pumps the heart of ‘Pedal’s better material. As the title suggests, ‘In Your Arms’ is a huge ballad, the kind that might have been on a Cher or Robin Beck album back in ’89. It opens with tinkling bell keyboards – the kind that a hundred AOR bands loved during the genre’s heyday but were outlawed in 1992 – before stretching to accommodate a solid guitar riff. A power ballad in every sense, the main melody is strong, but it’s the key change into a big chorus and an effortlessly melodic guitar solo that really hits the mark. Fritsch appears in fine voice throughout. While some might be excited that this is billed as a duet with Fiona, she appears in little more than a back-up capacity…and even then, she’s mixed quite low. Is this to cover up the fact her husk of a voice isn’t at its best? It’s great that she’s in demand, but she’s no Issa Oversveen, Angelica Rylin or Robin Beck.

The last three tracks are, sadly, far less fortunate. While there’s a definite 80s bias to most of these tunes, ‘I’m The Nyte’ goes for broke with an electronic beat, treated vocals and a very mechanical feel. It’s brave of a dyed-in-the-wool AOR band to try something approximating a Eurovision entry and something so pulsing, but beyond one or two listens, it really jars. ‘All I Want To Do’ is a very tired sounding acoustic plodder that sounds like a fifth-rate Bon Jovi b-side and ‘Lost In You’ has some reasonable melodic chops but sounds a bit rushed all round and the production, in particular, stands out as not being anywhere near as good as the rest of the album. A bit of time resequencing the album’s running order might have made this closing trio fare better, but as it is, it really feels like ‘Pedal To The Metal’s engine runs out of diesel round about the forty minute mark.

Anything with the involvement of Mark Mangold is often worth a listen – the overlooked 90s releases by Flesh & Blood and Mystic Healer, especially so – and this twenty-first century release by the rejuvenated D,SS is no exception. Aside from ‘I’m The Nyte’, it doesn’t try too hard to be different, doesn’t test the AOR fans braincells, but doesn’t have to. It’s not perfect by any stretch, but ‘Pedal To The Metal’ is a release that’s got songs strong enough to wheel in some curious ears and at least five tracks extant fans will love straight from the off.