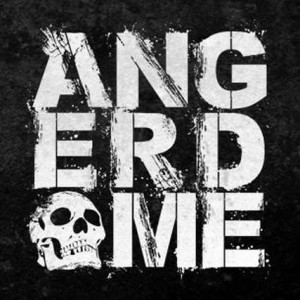 Settling upon a line up in 2015, some two years after their formation, Italian band Angerdome made their entrance into the groove metal sphere with a seven track release that’s bustling with, well, anger…and some absolutely fantastic riffs. The tracks on this debut are so clearly influenced by the aforementioned LoG release – with occasional touches of Gojira for good measure – and it results in a sledgehammer listen that’s almost as good as any of its kind.

Following a few seconds’ worth of buzzing harmonics, ‘Eascape This Reality’ sets the band’s stall firmly, with guitarists Mirko and Lucio making absolutely no apologies with their style. With a brutal chug and severe downtune, they put groove with a capital G first and histrionics firmly on the back seat, resulting in a pummelling sound that crosses Pantera with Lamb of God. Giving the riffs an extra edge, drummer Tia hits hard, but favours straight and simple power over too much pneumatic drive, occasionally shaking everything with impressive stops, while the vocal style shows that Cento is very much of the Randy Blythe school of growlers. That, in a nutshell, is Angerdome – everything they stand for, and the heart that beats within each of their songs. There’s no compromise; just attitude and a barrage of riffs. …And they’re great. The band’s theme song ‘Welcome To Angerdome’ is a touch more spacious, with the chopping riffs subsiding on parts of the verse to let the vocal come to the fore. The intro and bridge sections very much pay homage to Dimebag Darrell in the way they attack, but to counterbalance this, the band work a slower groove on the chorus and drop in occasional descending fills which really impress. Cento ensures his voice slays against the intensely heavy backdrop, but in (relatively) extreme metal terms, this is a very well rounded number.

‘Direct Result’ relies far more on muted riffs to carry the verse, thus bringing some savagely sharp edges, before the band stretch into a heavy riff that hints at early Machine Head…and all before twisting into a surprisingly bouncy groove. This is a tune where the riff is king and the riff is all – especially since the chorus doesn’t really grab in quite the same way the previous tracks had and (as with previous numbers) Angerdome have decided that any form of lead break or soloing is utterly unnecessary. ‘Shades For Colours’ balances this out by nailing the chorus to a mast and flying it triumphantly. It’s not a catchy, singalong affair – at least not at first – but it’s great to hear Cento stretching his voice just a little, even if there’s not really too much more melody. Riff-wise, it’s another belter with Pantera and Superjoint Ritual providing the most obvious touchstones, but there are flourishes of Machine Head and Cavalera Conspiracy, too, resulting in another four minute skull pounder that showcases the skills of two fine metal guitarists. Slowing things down a couple of notches, ‘Erase’ begins with an intense churning riff, over which the vocals growl a deep and throaty roar. As the band fully kickw in, there are even more of the same grooves you’ll have come to love by this point, only this time dressed in a little more speed. Angerdome mark their aggression with an influence from ‘Enslaved’ era Soulfly, thus giving the rhythm section more of a workout and showing that faced with some extra pace, Cento isn’t about to back down – he attacks each line with plenty of ferocity and while his lyrics aren’t always decipherable, he comes across as a total pro. Here is a vocalist who could take on some of metal’s finest.

The intro to ‘Through The Mirror’ sums up everything Angerdome are about in a very appealing way. One of the standout tracks, its heavy intro riff almost swings as much as it grooves. Gaining momentum, it does not seem so far removed from parts of Pantera’s ‘Great Southern Trendkill’ – the production making everything crunch in a most intense way – before a couple of key changes hint at more classic metal sounds. Somewhere beneath the downtuned barrage, Paolo’s bass rattles and is very occasionally more audible than before, while the guitarists show off a couple of Dimebag inspired tricks. All of this comes before dropping into a Lamb of God groove to finish. In terms of metal, you’d be hard pushed to find this style performed any better than it is here. Last up, ‘Fuck Your Creed’ spews extreme anger against a riff that’s undercut by a huge amount of pneumatic drumming. Here, Angerdome fly into a frenzy, introducing a touch of good, honest thrash, jostling for attention with some terrific, more typical sledgehammer riffs. There’s also a surprising – but brief – flirtation with a couple of slightly cleaner riffs for good measure; not that Angerdome have any intention of lightening up, of course – the speed and general intensity of this track’s verses mark some of the heaviest and most aggressive moments on this release.

With killer riffs and an amazing production job, if the first few bars entertain you, the rest of this release does exactly what it says on the tin. Often falling somewhere between Lamb of God, a couple of Pantera-related projects and underground Netherlands based band Laid To Waste, while their sound may not be especially original or particularly varied, Angerdome equals something close to essential listening.