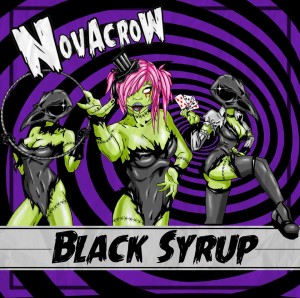 From the outset, we experience a hugely funky and rather dirty bass groove, and some retro sounds that sound like a home recording of drums from an old TV speaker. When the bass kicks back in, the bottom end is so deep it hurts. In terms of making an entrance, Novacrow certainly don’t believe in subtlety. With that, they have your attention, of course, and ‘Fat Frog’ embarks on a four minute dirty groove, like an old Love/Hate tune retooled for a grubby post-grunge audience. The way Jonyx powers through never subsides from this moment on, delivering riffs peppered with superb usage of wah-wah pedal, while the increased volume in Kitty’s vocals approaching the chorus suggests a very natural and powerful performer. The introduction of atonal gang vocals either adds to the fun or merely distracts – dependent on your point of view – and a bluesy guitar lead cuts through everything as the tune reaches it’s peak. This would be an ideal time to bow out, but Novacrow have other ideas… For the last minute or so, there’s a sense that, perhaps, this number could have done with a trim. A kazoo solo – surely to embrace the quirkier side of Novacrow – is a touch jarring, while a last chorus feels a little as if the band are repeating themselves once too often. It doesn’t necessary spoil anything that’s gone before, it’s just there’s a feeling that ‘Fat Frog’ could have been a little leaner, if not entirely meaner.

From solid beginnings, things then explode into what could best be described as an essential slab of schlock rock. ‘Fight The Horde!!!’ combines the previous fuzzed up riffage with a much more thrilling pace. The resultant tune, with the feeling of a Rob Zombie remix of a Godsmack belter, has it all: samples, a huge hook, a deep and dark riff and great playing from all concerned. Set against a grumbling bass and staccato guitar riffs, Kitty sounds better than before, while drummer Torben Schmit shows off a great range of styles – there are some great drum fills and the way he shifts between his snare and various toms has a great flowing feel. Chorus wise, this is hugely melodic, with the potential to get right under the skin. First time listeners should seek out this track as a taster, as it really demonstrates what Novacrow does best. ‘Black Syrup’ takes things a step backwards, no thanks to a set of lyrics that rely just a little too heavily on a set of words that rhyme – and probably weren’t designed for too close an inspection. Thankfully, it’s rescued from that due to a superb tune, this time driven by something a little like an old Pantera riff dressed down with a dark and bluesy swagger. Taking such a sultry mood by the scruff of its dirty neck, Kitty totally runs with the spoils. Aided by various vocal effects, she drops a fairly sexual overtones into each of the key points, suggesting this is a performance destined to rattle the Novacrow audience within the live set. The combination of swagger and heaviness is just wonderful and, once again, the rhythm section shows they can be tight and have great power without ever feeling the need to show off. ‘Set In Stone’, meanwhile, is a number with a heavy leaning towards alt-metal during its intro, again with some heavy drumming very much in order. Once things hit their stride, there are more gothic metal grooves at the heart of everything, but more so than ever. Even with the addition of clattering sounds that feel like programmed elements, this is very much a vocal piece. Kitty shows off a very appealing, crying tone to her voice one last time, while the addition of well placed harmonies adds a very pleasing melody throughout. In all, a great tune that presents a brilliant contrast between heaviness and accessible melodies – for those who love a tuneful slant without losing any crunch, this track could become essential listening.

Rounding up these already enjoyable sounds, a short instrumental closes this EP, showcasing some almost jazzy guitar tones against a gothic backdrop. First listens bring back memories of similar pieces scattered throughout the early Black Sabbath albums, or even a couple of segues from Type O Negative’s tongue in cheek peak. It teases for a minute or so and then fades into silence, just at the point you feel it should be followed by a crushing riff. In terms of sequencing, it’s clear Novacrow have used this to whet the palate for what may (or may not) come next, but it might just have worked better as an intro.

These five tracks straddle a thin line between good times and dark grooves and the contrast between the heavy riffs and Kitty’s appealing vocal style provides constant entertainment. Their sound might be a little comic book and cartoonish in a couple places, but the riffs are powerful enough to please most alt/hard rock fans. In all honesty, there’s not much here to dislike – even at an early stage, there’s a strong feeling that Novacrow have a very definite idea of the music they want to create and the audience with whom they’d like to share those good times. Highly recommended.