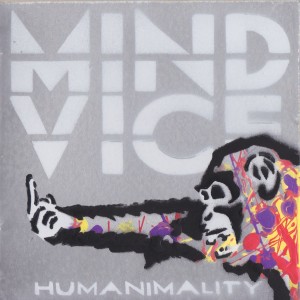 The basement where the Presidents’ debut was recorded provided the same location for the recording of this 2016 EP by Seattle garage rockers Mind Vice. They’ve also hired the talents of Uno, knowing that his no-nonsense approach would be perfect for their raw sound. Four songs loaded with a blistering energy committed to two inch tape, for the ultimate garage aesthetic; but that’s not all – they’ve also recorded their own version of The Presidents’ ‘Kitty’ to mark the occasion! In the hands of Mind Vice, of course, it becomes a far more intense experience. While retaining the Presidents’ sense of fun/irreverence/annoyance [delete as applicable], Chris Ballew’s guit-bass sound has been crushed and replaced by a hard twanged funk bass sound, while the noisy chorus sections now have a heavy and sludgy sound – despite still being a dumb song about a dumb cat, the general force is a fierce one, the feeling that Mind Vice can whip up a storm at any given moment never too far away. It’s an interesting choice of cover, to say the least.

With regard to the three original Mind Vice compositions, obviously, this is certainly where the band’s talents shine through best and where the EP’s real musical meat can be found. ‘Bluesmotorwolf’ is said to have been inspired by the passing of the legendary Lemmy Kilmister and the energy he gave to his brand of rock ‘n’ roll. Those expecting a rollocking Rickenbacker and the kind of speed that drove the likes of ‘Bomber’ might feel short changed, but there’s little denying that Mind Vice’s brand of garage blues noise lacks compromise. Miles Hubbard’s drum sound is echoing and heavy throughout, helped no end by Uno’s lo-fi approach to production, and it’s with a real bluster those drums drive the track. A fast chorus soon gives way to a groove-based verse, where Mind Vice drop into a very 70s riff, somewhere between blues and heavy psych. The vocals wail with an old school intent, then just as things have really got underway, a bass crunch signifies even heavier things and when the band shift back into bluesier climes, it’s like having your head crushed by a garage blues band jamming on Audioslave’s ‘Show Me How To Live’. More blues informs the brilliant ‘Congress of the Crow’ a cock-sure groover that stokes up the riffs and wah-wahed guitar. The rhythm section, again, show a huge power but it’s the push and pull between Walter O’Toole’s retro wail and Michael Knapp’s even more retro dirty guitar sound that thrills throughout.

The heady sounds of ‘Crow’ suggested that Mind Vice could get even more intense, and EP closer ‘Break The Cage’ really delivers. Bassist Ian Sides taps further into the funk, slapping at his strings with a real intent during the intro, while the guitars grumble in a style that finds itself somewhere between basement band and the Infectious Grooves records. A shouted gang vocal lends a simple hook, but once more, Walter’s belting vocal carries the bulk of what little melody remains. This track is a genuine tour de force: the drums are huge, the guitars grubby…and that bass…the bass rules all. Just as intensely as the track arrived, it ends as suddenly, but in all fairness, it couldn’t have given more.

These four tracks encompass retro rock, blues, funk and garage rock in a real melting pot of noise, made even better by Conrad Uno’s direct to tape approach. No frills, just maximum rawk, and if you like it that way, then ‘Humanimality’ is most definitely worth a spin.