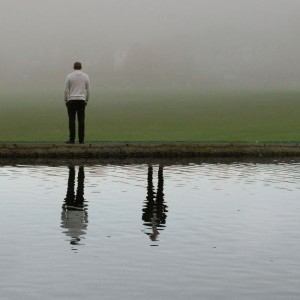 Working through a variety of styles and inflences on their debut EP, Buckinghamshire’s Rhyn are an interesting band. At first, their music displays a heaviness, but as ‘Absence’ plays through, each passing number shows a slightly different aspect to their songcraft. Here is a band who are capable of complexity, but understands that complexity for the sake of it just isn’t that interesting (Dream Theater, please take note). And although they prove straight away they can be crunchy and a little arty (as per Hawk Eyes and the earliest Biffy Clyro), at least one of their members understands the overriding importance of a chorus.

‘Elegy’ is one of those tracks which should win Rhyn an audience immediately. The drums are heavy but retain a quirk that ensures they never feel like mere tub thumping, while the guitar riffs crunch like a cross between Foo Fighters and Asking Alexandria. After an undeniably strong opening, the riffs don’t so much subside as drop into a stop-start punch, which in turn finds the spaces filled by an interesting vocal melody that, in places, feels as juddery as the drum riff, dropping in some interesting rhythmic content. And all this before belatedly introducing a fat bassline. With all the pieces fitting together gradually, it’s very much a complex musical jigsaw – and one where it’s not entirely possible to see straight where a chorus hook will take things. When that time inevitably comes, the quirks smooth out, vocalist Chris Black raises his voice from a rock belt to a more theatrical cry, adds a few piano flourishes and the melodic alt-rock which follows is rather fine. Attempting to fit so much into a one track could have backfired, but somehow Rhyn totally pull it off – ‘Elegy’ shows a gift for arranging that’s impressive and a belief in hooks that shows that this band are far beyond the realms of meat and potatoes alt-rock. Be warned, though, this is among the heaviest of the EP’s tracks – and the only one featuring a vocal growl (albeit very brief); from here on in, the songs are often as good, but there’s a bigger focus on the piano.

‘Fall Away’ has a very 90s sound at first, with chugging guitars laying down a very melodic riff, before allowing a tinkling piano motif to drive the verse. More rock than pop, the rather hushed vocal compliments the piano perfectly and as the guitars return and shift gears into a superb chorus, Rhyn’s alt-rock has a huge appeal and a great radio friendliness. Hearing this for the first time is like experiencing Snow Patrol if only they would go back to doing something – or, indeed, anything – remotely interesting. The chorus is the big draw here, but a close ear should be kept on Guy Johnston, whose guitar playing is always mindful of the job in hand. He’s clearly a good player, but he’s also a team player – he doesn’t ever give in to any urges to play anything too flashy, but the soaring lead sounds as the number reaches its end have a superb tone. Turning up some of the piano-based riffs, the verses of ‘The Only Place’ occasionally have Muse’s sense of grandiosity in the way the vocal rises gradually over a mechanised riff, here shared between piano and bass. It’s style should be familiar to listeners of the aforementioned band, though, thankfully it all comes without any of Matt Bellamy’s atrocious, overbearing whining and wailing. In a sharp contrast, the chorus hits hard, with a pounding drum line and shrill guitars. The move back into the verse is a touch jarring (the chorus just stops), but the second time out, the Muse-ish arrangement is bigger and warmer, with bassist Dan Marr carving out a real presence. Reaching the climax, choppy rhythms and militaristic drums add an interesting bridge and by the time the chorus rolls around for the last time, you may even feel like you know it well. Light and shade, a touch of the theatrical and a big hook – this one has it all. It’s not as accessible as ‘Fall Away’, but those who find themselves liking it at first will love it before too long.

The softer side of Rhyn gets an airing throughout the first verse of ‘Finite Bodies’ as a clean toned guitar and piano weave throughout each other in a rather satisfying manner. More warm bass adds heart while an aching vocal suggests influence from Snow Patrol. Things change dramatically for the chorus and beyond, though, as Johnston steps up with some really chunky riffing. Muti-tracked guitars bring plenty of alt-rock chops, while complex vocals weave in and out of each other, presumably in a call back to the opening arrangement. By the time you’ve got your teeth into the main groove, Rhyn decide that they’re done and everything just stops dead – most unexpectedly too. Repeated listens lose none of the magic and in about three minutes, they’ve kind of covered their full range. In all, a great tune…just a little too short! In another top rocker, ‘Victory’ blends bits of Foo Fighters force with a touch of Biffy emotion. While not the most interesting arrangement, there’s some great fuzz bass and a riff that is the embodiment of that fist-in-the-air punch. The slightly nasal vocal seems a little odd given some of the fine performances we’ve already encountered but, if nothing else, it shows Rhyn at their most radio-friendly, while the full sound brings out the best in the production job. Closing everything, ‘Believe In Ghosts’ utilises a 90s indie strum via the acoustic guitar, but it’s soon clear that it is just a means to an end – this tune belongs to Black, whose measured piano chords and breathy vocal are just lovely. Set against a deep bass, his performance is mature, retro, aching and unfussy – the kind of thing that Tim Double-Barrel from Keane did well, way back when . The simplicity in this ballad is everything; no amount of flowery syllables really capture the spirit within – and it’s so hard to believe it came from the same guys who dropped the spiky ‘Elegy’ some twenty minutes earlier…

On this short collection of rock tunes with a piano (as opposed to “piano rock” which, as Ben Folds will no doubt ascertain, is a different beast entirely), Rhyn mix up styles with ease; so much so, it’s pretty hard to pick out which is their best. A showcase for good tunage and a couple of cracking choruses, ‘Absence’ paves the way forward for big things. Recommended.