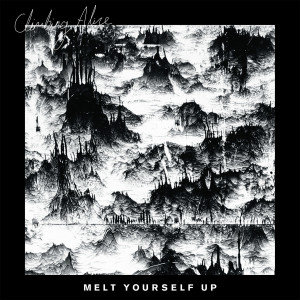 Wakefield’s Climbing Alice mix various alt-rock styles into a sound they self-bill as Alt-Popp. For the average listener, what this actually means is that they’ve taken a slab of post-grunge guitar noise, a generous helping of goth and a pinch of shoegazey jangle and come out winning. There mightn’t be anything overtly new about this band’s music, but – as evidenced upon this debut EP – it’s all played with a fiery passion…and most importantly, it’s got the riffs.

Opener ‘Chicken Feet’ is one of those tracks that’ll grab you straight away…and not necessarily for the reason you initially expect. Wasting no time, this number thunders with a heavy post-grunge riff served up with such dirt, you’ll think your speakers are broken. The guitar tone here is just superb: ugly, threatening and yet altogether familiar, it’s distorted claw is ready to tear at your ears until you just can’t take it any more. Strangely, that heavy edge is not what makes ‘Chicken Feet’ so effortlessly cool; the real clincher here is the unexpected twist into eighties sub-goth sounds. Firmly displaying Climbing Alice’s northern roots, the vocal drops into a croon that could easily be compared to Echo & The Bunnymen. In this three minutes, the muddy chug and throaty voice and echoing atmospherics jostle against each other in such a way that it’s at first quite striking, but really works for all concerned. Tearing your ears away from the more obvious, too, there’s a brilliantly fat bass tone lurking at the heart, before an atonal and atmospheric lead guitar break tops everything. In these three minutes, Climbing Alice will have either thoroughly impressed or confounded.

With a bit more of an indie jangle at play, ‘Ration With a Passion’ serves up a chugging and heavily syncopated verse where choppy guitars lay the foundation for another enthusiastic vocal before switching to darker things. The chorus works a heavily reverbed wall of sound, over which the vocal offers a surprisingly catchy melody, but it’s the brief instrumental bits bridging the two that show off a real attitude. More distortion and a slow and almost shoegazey drone suggests a real darkness fighting from within – and it’s this aching sense of disappointment colliding with a sharp need to shake up their listeners that sets Climbing Alice apart from similar performers out there. Focusing more on a crashy riff, the quirky ‘Liberty X Killed My Childhood Soul’ kicks off with a slow groove, heavy on metallic sheen, in a style which suggests that at least one band member loves post-hardcore – and Fugazi in particular – before reverting to a surprisingly catchy style that owes more to Foo Fighters and things of a more radio-friendly nature. That riff is the closest things actually get to being commercial, since the vocal does its utmost to put things on edge and the combination of heartfelt belt and clanging guitars set this track afire. It’s possibly not as well-rounded as ‘Chicken Feet’, but certainly allows a great insight into the power within this trio. Last up, ‘Fau Negage’ combines the best elements of the previous two tracks; abetted by a powerful vocal, the riffs are alternately hard, fast and dirgy, but the overriding guitar tones – presented here with ever more of a ringing edge – bring out the best in the production which, for a smaller release, sounds great.

There are hooks and attempts at choruses, but these often play second fiddle to the riffs and general raucousness of the material. In many ways, Climbing Alice are more about intensive moods than songs, and if their sound grabs you – which it really ought, even if you have half an interest in guitar driven alt-rock – ‘Melt Yourself Up’ should offer plenty of entertainment. Recommended.