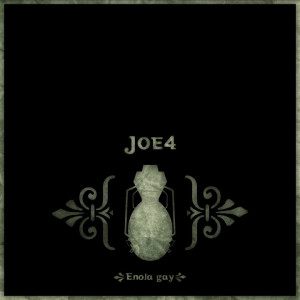 While only comprising five numbers, the band make every moment count with angular and noisy arrangements. Opener ‘Pigman’ cranks an enormous bass riff, one that comes with such clarity you can almost hear the buzz of every string, over which a discordant guitar chugs a few disjointed chords. The effect is like hearing The Jesus Lizard with a less demented frontman. Swapping David Yow’s unhinged yelps for a gravelly shouting – more akin with the likes of Cop Shoot Cop – it’s altogether more accessible than the Lizard, though never ever accessible in the truest sense. A funky breakdown in place of a guitar solo midway comes as somewhat unexpected, but shows – even at a very early stage – that Joe 4 are keen to add their own slant to a classic noise rock sound, rather than just settle for shameless regurgitation of their heroes. Also benefiting from a superb production value, ‘Postman’ brings a slow chug that eventually becomes ugly in its repetition. At the mid point, however – a moment that feels a long time in arriving – the band switches gears and drops into a solid groove, again almost quasi-funky. This is superb on a number of levels: the once straight shout of the vocal now has something busier to bounce from; the guitars tease with a busy alt-rock tone, while the drums drive everything with a powerhouse performance, aided by a few impressive stops and an almost tribal bottom end. Fine, fine noise rock indeed. Moving into a wall of sound climax, these guys show they could take on any number of similar sounding bands and come out winning (Cattle, perhaps, excepted).

Occasionally sounding like an extreme version of Therapy? crossed with Fugazi, ‘Pop Is’ is confrontational but works the rhythm section very well in the creation of an almost unshakable groove. With a chorus section shifting into distorted ugliness, the vocal shouts intermittently and sometimes incomprehensibly. Overall, it’s Joe 4’s least impressive work here…but even then, the simple and hard groove still has a sizeable noise rock appeal. In another shift towards the quasi-melodic, ‘Johnny’ is home to a superb drum performance and has guitars that are so domineering it almost sounds as if there are four cranking out two different riffs simultaneously. This is likely due to a higher pitch in bass, of course, but the tightness throughout is more than commendable. Moving into the track’s second half, the venting voice subsides, the thicker guitar tones give way to some interesting staccato work and Joe 4 drop into another funky groove that showcases a superb bass sound and more Fugazi love. Last up, ‘His Profile’ works a furious vocal against some interesting drum work where rolling fills smash against a wall of sound bassline. All the while, guitars – with a deeper and warmer sound – ensure there is very little room to breathe, musically speaking. The claustrophobic results occasionally end up resulting in something that barely masks this Croatian band’s real love for The Jesus Lizard, but then, that was almost certainly their intention.

Presenting twenty or so minutes of genuine rawk, ‘Enola Gay’ is never easy listening, but almost always obstinate – and to near frightening extremes. Sounding better with each play, it’s a release that would have been well at home on the Amphetamine Reptile label circa 1993…and it’s one which lovers of a clanking and grinding riff should not miss.