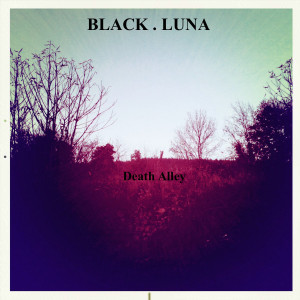 Comprising ex-members of The Venus Flytrap, Black Luna is a three piece band who bill their music as “heavy lo-fi psychedelic garage”. That just about covers it, since their debut album 2015’s ‘Death Alley’ is all those things…and more. Often coming across like a hybrid of Yeah Yeah Yeahs and stoner rockers Ruby The Hatchet dressed down with a production value befitting a shoegaze band, these eight tracks really capture a sense of raw energy within a rather succinct twenty eight minutes.

Very much a scene setter, the short instrumental ‘Psychedelic Tandoori’ brings a huge amount of reverb over a guitar line that sounds as if it’s channelling the soundtrack for a spaghetti western. With the arrival of ‘Queen’s Karma’, the gloves are truly off. The guitars swell into a frenzy of distortion – bolstered with an even deeper bass sound and the drums are of the purest garage rock variety. Ramona Tornadita’s vocal does not escape the distorted filter and, much like Karen O on the early Yeah Yeah Yeahs releases, is set to whip things into a frenzy, yelping through each line with abandon. In all, this represents three minutes of great garage rock, but reaching the climax, as Noemie smashes her drum kit into oblivion, you may just find yourselves thinking these guys have peaked too early. With that in mind, ‘Fly Inside’ sees the band switching gears and reintroducing the cleaner twang from the intro. The tune which soon begins to unravel has a swooning sixties quality, with the repetitive rhythm guitar always lending a sense of movement. The standout feature here is Mathilda Black’s bass; warm, punchy and unwavering, high in the mix and always there, keeping everything rigid. The lead guitars eventually bring a huge amount of twang, but not before they’ve thrown out a heap of distortion via various leads that owe so much to Jesus & Mary Chain. Somewhere in the middle, Ramona drops a wistful vocal – the breathy edge always feeling more than a little European – and while her surprisingly gentle style may occasionally seem at odds with Black Luna’s experimental slant, hearing it all together, it really works.

Having seduced with some retro melodies, ‘Dumpsey’ turns everything on its head. A couple of minutes’ worth of feedback and sound collage go on just long enough to make you wonder if that’s all there is – kind of like a mini tribute to Neil Young’s ‘Arc’ – and then Black Luna unleash an absolutely killer riff. Part stoner, part space rock, the way the punctuated bass notes tease is slightly remeniscent of early Hawkwind, but the main drive comes from an ugly repetitive and phased noise. Of potentially massive appeal to the Monster Magnet fan, this riff is at once totally confrontational yet oddly mesmerising, and after a few minutes of being ground into submission, Black Luna let the listener free with a quiet vocal interlude where Ramona mumbles over something akin to ‘Interstellar Overdrive’, before everything comes to a head with lightning fast garage punk thrashing. The vocals are near inaudible, the bass less important, but the drums and guitar seem set to destroy. Less complex, ‘Shake’ brings some straight garage rock in the vein of Idealipsticks and Yeah Yeah Yeahs, loaded with a timeless guitar sound and some superb yelps. The music is so familiar, it’s almost possible to overlook the lyric being delivered in French. For the more purist garage devotee, this is set to be the album’s standout, despite their being potentially more interesting material on offer elsewhere.

Kicking off with a fantastic drum sound before quickly introducing an uncompromising guitar, ‘Electric Bride’ goes for the throat in terms of heaviness, smacking the listener with a truck sized distorted riff that would fit a post-Slo Burn project from John Garcia. Simple and direct, the fuzzy metal monolith is made of classic stuff. It could easily sustain the whole track and never become dull but, as always, Black Luna have other ideas…and everything subsides, leaving just drums and vocals to carry the weight, while the guitar throws out distorted shapes. With a Meg White stomp, the verse tips the hat to the White Stripes, with Ramona sounding rather assured. Squalling and twisting, the guitar eventually brings back the monster riff – only this time, it sounds bigger and better than ever, since the fuzzy guitar effects overlay themselves to make a hefty discordant racket. The results cannot be played quietly. ‘Tarantula Demented’ shows no signs of things ever winding down – best described as a six minute frenzy, the guitars sound as if they’re being played through a busted amp, while Mathilda firmly takes the reins with a buzzing lead bass. Ramona’s screaming frenzies are crucial to the overall picture, but the ugly guitar work is king; if not filling space with distortion pedal noise, the lead breaks are just as cutting. As the number moves along, things sound progressively sweatier and sweatier; the listener is given no chance to relax or reflect and eventually things just stop…and a backwards replaying of the album intro suggests it’s time to go. In all honesty, ‘Tarantula Demented’ is brilliant – along with ‘Dumpsey’, it is an album highlight, and quite possibly Black Luna’s masterwork.

In terms of garage band sounds, this really hits the spot. If you like it pure, the stoner-ish elements and wanton distortion freakouts may not always appeal, but there’s little denying Black Luna’s general power. ‘Death Alley’ is a proper mixed bag where, surprisingly, everything works. …And the world might be a better place for having a Frankenstein-like creation built from the best parts of Yeah Yeah Yeahs, Monster Magnet, Red Aunts and Hawkwind…surely?