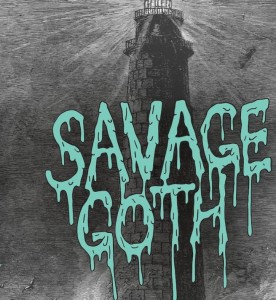 Savage Goth is concrete proof that you can’t judge things by name alone. Such a judgement led to one of the band’s first gigs being support to a tech metal band – their choice of music somewhat lost upon the receiving audience. Led by songwriter Matthew Kenworthy, the name was a tongue-in-cheek throwback to a slur dating back to his school days in the north of England, where anyone who admitted to liking guitar based music was labelled a “savage goth”.

Leaving the listener no doubt as to their actual musical preferences within just a few short bars, Savage Goth open this release with a few unaccompanied, cold shimmering guitar chords. Their slowly played, sparsely arranged and heavily filtered approach throughout ‘Ghosts’ throws the listener into the coldest world of dreampop, where a mechanised beat reinforces the lack of pace. This is no bad thing, of course, and for the chosen style, everything here sounds great. Things only pick up for the first chorus whereby the programming stutters a little, sounding quirky as opposed to flat out jarring. At the close of the track, the stuttering rhythms collide with a tinkling keyboard that has the feel of a Jarre demo, always at odds with the spacey, deep beats and yet somehow making complete sense. If it all appears disjointed, fear not, for the basslines throughout are terrific. Although the bass plods throughout, it eventually claims a vital role thanks to a high place in the mix. Atop of everything – or perhaps swimming somewhere within the otherworldly swooning sounds – a wandering vocal extra character, a voice so distant it’s almost impossible to pick out more than a few lyrics, but that never matters as the core of the music is so strong.

Without losing any of the overall coldness, ‘Lurker’ manages to be a little more accessible. That said, how the vocal managed to be twice as loud but still almost as impenetrable is anyone’s guess! Still, this is a fine tune, indeed. Loud, ringing guitars occasionally wander into a mood that sounds like Johnny Marr warming up; the bass – as omnipresent as before – dances back and forth with a gentle nod to eighties goth, and the result is a surprisingly joyful indie jangler doused with plenty of reverb. Shorter and more structured it may be, but the echoes and drones that douse the vocals and parts of the instrumentation ensures that it stays true to Savage Goth’s vision of dreaminess. For the aggressively titled ‘Bloody Hell Fire’, the musicians are totally relaxed as their dreampop elements collide with retro sounds of another kind – the crisp guitar lines having a slight alt-country flair. With a retro 50s twang piercing through an almost waltz-like time signature, the music is always familiar, as if it’s been dragged into the present via a traditional passing through the generations. The levels of reverb ensure that this never feels out of step with the other material, but it has a completely different heart, like an impromptu collaboration between alt-folk troubadour M.Ward and Eels. If that sounds bizarre, it all makes perfect sense when heard first-hand.

With an incessant beat, ‘Manchester Tombstone Surfer Cult’ presents Savage Goth at their most fun…assuming that “fun” is an appropriate concept for what they do. A complete sidestep from the rest of their material, hearing this tune for the first time with its echoing guitar lines, heavily treated vocals and busy, punching bassline has the effect of feeling like you’re hearing an unreleased New Order demo from 1983, only speed and pitch adjusted. Never wavering in pace or intent, its strong collision of sharp beats and trippy vocal melody gives a new slant to the shoegaze revivalist movement. The bass playing is first rate; the frantic ringing guitars the perfect counterpoint to a vocal yelp that is as close to a chorus as we’re allowed. …And just as the feelgood vibes start to take hold, Savage Goth decide enough’s enough, turn off their drum machine and everything comes to an abrupt halt. Still, it was cool enough while it lasted. Closing the EP, ‘Revival’ is, in dreampop terms, about as close to perfection as you might find. A loud guitar shimmers, always with a crystal like clarity. Most of the time, the mood is that of ‘She Hangs Brightly’ era Mazzy Star, but there’s more here than mere copying. The vocals waver in and out, happily allowing those guitars to be the main focus at first, but once the bass asserts itself, that brings things up a gear – the bass sound is amazing, almost Peter Hook like, the hard pluck of the strings clearly audible in a few places; a very welcome touch that really hammers home how well produced this EP is, especially for a DIY cassette release. On the occasions the melody shifts from its main groove, there’s almost a tropical flair which, naturally, adds a warm twist, but placing that against rattling percussion akin to xmas bells seems somewhat unexpected! Somehow, though, Savage Goth makes this sound like the most natural thing in the world.

Within these five tracks, there’s a fairly coherent feel despite a couple of sharp changes in mood. In terms of dreampop from the underground, releases seldom come more thoughtful than this. For the aging alternative fan who still hankers after the sounds of 1989, Savage Goth might just drop the last great release of 2015.