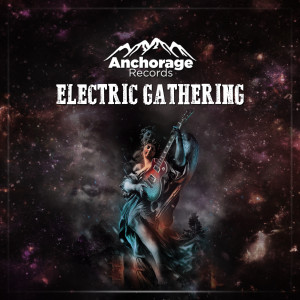 When it comes to hard rock and metal guitar playing. there’s a fine line between melodic, harmonious workouts and empty, soulless fretboard bashing for the sake of it. For every player who understands the importance of filling several bars with succinct and thoughtful soloing, there are a thousand John Petrucci wannabes who think – oft like Dream Theater themselves – that notes and flash are a thousand times more impressive than actual tunes…and just because we can see them pulling orgasm faces while bending strings at lightning speeds, we’ll somehow feel the magic too. They’re wrong, of course.

This compilation disc from Anchorage Records brings together various metal and fusion fretboard stars for a (sometimes) very enjoyable collection of instrumental workouts. While not all first rate, thankfully, a good number of the contributors included within understand the school of thought practised by Scorpions man Matthias Jabs and Iron Maiden‘s Adrian Smith (to give two excellent examples) in that an overriding melody will always be more impressive than merely playing notes with flash and bluster.

Things don’t necessarily get off to the best start, though. Finnish guitarist Elmo Karjailanen lists a great set of influences on his personal website as well as a sense of humour (“instrumental rock guitar that’s not like David Hasselhoff”), but despite suggesting that Steve Lukather and Devin Townsend have influenced him in some way, his featured track ‘Unintelligent Designs’ presents four minutes of clanking that often comes across as a poor rehash of a well worn Joe Satriani piece. It’s technically sound; after all, it’s modelled on ‘Satch Boogie’, just played heavier, but it’s quite un-michael hampton,engaging. A gradual increase of soloing speed doesn’t make up for the lack of general originality. It’s only approaching the coda, a muted string informed, off-kilter piece of circus music (hugely influenced by another Scandinavian maestro, Freak Kitchen’s Mattias Ekhlund) that he does anything truly impressive, but in honesty, such quirkiness feels like an afterthought. A more enjoyable boogie, ‘Alter Ego’ featuring Wally Z and John Herdt, is very seventies in construction, a little eighties in tone, but kind of timeless as a basic workout for soloing. Less Satriani and perhaps a touch more Molly Hatchet and Foghat, this boogie – although quite safe – shows off some great twin leads and a very pleasing lead tone. There’s nothing too flashy here; just guys who sound like they’re having a great time…and sometimes that’s enough to make things enjoyable from the listening end, too. Elsewhere, Michael Hampton lends a few melodic metal touches on ‘Club Metalfunkadelamack’, an okay workout that’s more swaggering hard rock – (again, with a touch of the early Satrianis) – than either funk or metal. It’s quite melodic and enjoyable to begin with, but an empty and hard drum sound combined with a harsh rhythm guitar lead to things sounding slightly grating by the mid point; George Engelbrecht’s ‘Fearless’, meanwhile, is the opposite: loud keyboard patches bringing sampled orchestral sounds are off-putting, but once George takes over with a melody that’s as striking as it is grandiose, the backing’s shortcomings are all forgiven. A player with a sweeping style, he makes the metal sweep-picking and shredding sound as effortless as the likes of Symphony X make it look. If you like huge prog metal sounds with a cinematic broadness, George is bound to impress.

Tackling a huge riff that sounds like the bastard child of Dio’s ‘Holy Diver’ and a Glenn Tipton classic, Jeff Fiorentino’s ‘Deafen Thy Neighbor’ is superb; here is a man who not only plays a couple of mean 80s inflected solos and shows off equally sharp arpeggio skills, but is often content to allow the main tune to carry everything – and with such a superb riff to hand, the track couldn’t fail. For those who like the idea of something that could have just as easily provided the backdrop to a vocal piece, this will provide an entertaining listen. Better still, and bringing a welcome change of mood, ex-Adagium six stringer Leonel Varak shows a mastery of a more melodic style with his ‘Abby & Owen’, a very reflective number. Throughout his showcase, he shows no temptation to swamp anyything with anything shreddy, preferring instead to compliment the atmospheric sounds with ringing tones. The effect of hearing this for the first time is to experience a kind of musical restraint that some guitarists will never master; like hearing a Gary Hoey ballad about his beloved ocean but without being drowned by his beloved wah-wah pedal. For metal thrills, Markus Johannson and Toby Knapp at first sound like they’re about to tick all the right boxes, but – wonderfully retro twin lead aside – ‘Patient Zero’ is a hugely emotionless, finger-blurring shredfest, not helped by demo quality sound and overbearing drums. Here is a number that might just appeal to fans of Impelliteri or Michael Angelo Battio, but for the rest, it’ll be one or two plays before the skip button is called into regular usage. It’s a cold, lightning fast metal meltdown; a tune that despite containing more notes per bar than most, lacks interest.

With a funky and flowing confidence, Jeff Kollman’s ‘Shedding Skin’ is the compilation’s genuine stand out. A player with an impressive CV, stretching through work in the 90s with melodic progressive metallers Edwin Dare, funk fusion with Chad Smith‘s Bombastic Meatbats and playing sideman to the legendary Glenn Hughes, Kollman has tackled most styles with relative ease…and within this track, he demonstrates that within a condensed workout. From the finger picked opening – bringing a stylish acoustic slant against a simple drum – Kollman then descends into chunky melodic rock, over which he plays with the kind of grace that Elmo Karjalainen’s number really could have done with, his soaring presence complimenting his equally tough tone. The main riff is gritty and finely played, but his charm is helped no end by a very tight rhythm section featuring Shane Gaalaas (drums) and Ray Reindeau (bass), between them bringing a new meaning to the phrase “power trio”. Almost as enjoyable, ‘Hip Hop Karma’ by Chris Poland – arguably one of this comp’s most famous players – places the one-time Megadeth axe man in jazz fusion mould, his fat tones proving the perfect compliment to a hugely impressive slap bass. Dropping into a multi-tracked harmony in lieu of a chorus, he also contrasts the metallic playing in the verse with something instantly accessible. For the mid section, there’s a bit of freeform jazz work – like experiencing Frank Gambale with some big boots on – before the featured solo, loaded with a wonderful soaring style tops everything off nicely. Absolutely a word apart from his speed metal chops, this isn’t far removed from Gary Hoey covering John Scofield…and in instrumental guitar terms, the world’s a better place for this kind of thoughtful playing. [It’s also a thousand times better than fusion recordings by another Megadeth guitarist, Glen Drover.]

With fifteen tracks, varying moods, varying production values and clocking it at over seventy minutes, ‘Electric Gathering’ is a fairly weighty affair that’s best approached in chunks. For fretboard freaks, the best players – Kollman, Poland, Varak and Engelbrecht – will almost certainly make this disc well worth investigating, assuming you don’t have their tracks elsewhere. There’s every chance you’ll pick up on a couple of other unfamiliar players somewhere along the way, too, meaning that – in compilation terms – ‘Electric Gathering’, although a little uneven, does a decent enough job and with a reasonable amount of appeal.