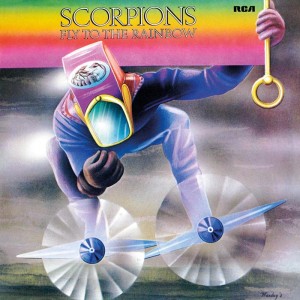 After losing three members following the release of their debut album, Scorpions vocalist Klaus Meine and rhythm guitarist Rudolf Schenker merged with the remnants of a band named Dawn Road. Though the Scorpions name was chosen for the newly formed quintet, in terms of overall sound, their second album credited to Scorpions is a world away from their first.  In fact, there are huge chunks of 1974’s ‘Fly To The Rainbow’ where the only recognisable feature is Klaus Meine’s vocal, and even that, in many places, has developed in style.

Alongside Meine and Schenker, the new Scorpions featured drummer Jurgen Rosenthal, bassist Francis Buchholz and guitarist Ulrich Roth (aka Uli Jon Roth).  While Rosenthal only held his position temporarily, the other two new members would be long serving, with Roth’s input, in particular, having a profound effect on the shape and sound of the Scorpions’ next few albums.  With Roth on board, the band would all but cast aside their psychedelic and progressive experiments and opt for a more straight ahead rock vibe.

As far as ‘Fly to the Rainbow’ is concerned, Roth’s influence upon the band is obvious right from the start.  The full-on, high speed rock of the opener ‘Speedy’s Coming’ couldn’t be further from ‘Lonesome Crow’s general mood if it tried, and is the greatest example of the big stylistic changes which occurred between the two recordings.  Scorpions really suit the proto-metal mood of this cut; and while it is Roth’s hard driving riff which leaves the strongest impression (the band clearly wishing to show off the skills of their new lead guitarist), Meine’s lead vocal is almost equally striking.  He wails at full pelt in a rather unsubtle ode to a female rock fan, and while his heavily accented syllables can be heard to understand on occasion, it’s a great hard rock vocal, which paves the way for his distinctive style as heard on Scorpions’ more famous works. It’s never going to be a rock classic, either lyrically or musically, but placed at the front of ‘Fly to the Rainbow’ it’s great enough.  In three minutes, it clears plenty of cobwebs, thus leaving the bands previous bluesy experiments in the dust.

Also demonstrating the newly-found more aggressive side to the band, ‘Drifting Sun’ – a number written and sang by new boy Roth – raises the quota of guitar driven posturing.  After a bombastic intro which is so obviously inspired by Hendrix’s ‘Spanish Castle Magic’, Roth’s heavy blues-edged riffing is “complimented” by an ugly line played on an analogue synth (interestingly, for which nobody is credited).  The ugly keyboard doesn’t diminish the power or presence in Roth’s general approach once he gets going, and this track is absolutely loaded with scorching guitar leads – both heavy on the whammy bar and heavy on further Hendrixisms.  His vocal is strong and full of affectations which are closer to a German-accented Hendrix (can you tell he’s obsessed?) than Meine’s shriller approach, but there’s certainly room for both styles on this album.  The track would have been improved by not letting Rudolf Schenker near the mic, however… His contribution of a few vocal lines heavily disguised by phasers does nothing for the track at all.  Luckily, the music at this point takes on a very threatening atmosphere as Buchholz’s bass lays down a heavy pulse, over which Roth offers more aggressive soloing.  Fans have a divided opinion on this number, but in all honesty, it should be considered one of ‘Fly to the Rainbow’s greatest tracks, based on guitar riffs alone.

The first of three co-writes with Michael Schenker (as part of an agreement for his freedom to join UFO), ‘Fly People Fly’ is lyrically twee; it’s main refrain – acting as pre-cursor for the title track – is hippie oriented and several decades later sounds a tad silly.  That said, it’s a refrain which sticks in the head, even if you don’t want it to.  Lyrics aside, it presents one of Meine’s stronger performances; his vocal unwavering and carrying real presence throughout.  Roth’s occasional lead fills and solo have a decent bluesy tone, even if that solo does not much more than mimick Meine’s lead vocal tune.  While the rhythm section of Rosenthal and Buchholz have an important role in holding everything together, neither player gets to do very much.  In all, this track represents a promising musical idea which could have ended up far more interesting than it actually is.

‘They Need A Million’ opens with one of the most sophisticated arrangements from the early Scorpions, as Roth launches into an acoustic piece which showcases a wonderful finger-picking style.  Even with the addition of Meine’s vocal, this piece of music has a sense of intricacy which early Scorpions albums often lack. Beyond that intro, the band retreat to tried and tested formulas with Roth busting out a huge electric riff, full of reverb and vibrato against Schenker’s jangling rhythms.  Things then take a further downturn as someone unwisely decided to let Schenker handle lead vocals again.  Here, his voice not only unremarkable, but manage to be even more heavily accented to those of his bandmates.  Meine’s backing vocal has a distinctive edge, but aside from that, it’s a wholly unremarkable number which barely scrapes by as filler.  Also very much filler material, a Michael Schenker co-write, ‘Far Away’ has an atmospheric intro with Buchholz playing long bass notes against plinking guitars which should have been pleasant, but everything is smothered by Meine singing in falsetto.  It’s pretty nasty.  Once it arrives, the main riff is uninspired too.  It’s saved to a degree by Roth’s lead, but even that isn’t as good as some of his other work.  Heavy handed doesn’t even cover it once you factor in Meine’s lead vocal proper, which captures him in a particularly unsubtle mood.  While there’s no argument his voice is unbelievably strong – and would lead him on a path to being one of the most distinctive voices in rock – the slightly lower key he eventually settles upon here isn’t always easy to listen to.  Still, it’s a vast improvement over that intro!  ‘This Is My Song’ is much better, and while it could be considered pop music by Scorpions standards, its chirpy arrangement features a great twin guitar at various stages, a absolutely gold-standard bassline from Buchholz and a superb drum part from Rosenthal, heavily accented with jazzy fills.  Since this album is the only one to include Rosenthal in the Scorpions line-up, this track represents his time in the sun, so to speak – showing the world he has so much more to offer than the bog-standard rock drumming featured on most of the other cuts.

The only time ‘Fly To The Rainbow’ drifts into a more progressive territory is on its title cut, another number which was written, at least in part, by Michael Schenker before his departure.  Roth is also credited as a writer on this track, so presumably he took Schenker’s outline and then hugely embellished it.  The epic journey begins with a rather intricate acoustic intro not to dissimilar to the one featured on ‘They Need a Million’, and with harmony vocals capturing Meine and Roth together, it shows a degree of sophistication and subtlety.  This is only fleeting, since at around the two minute mark, this is pushed aside by the arrival of the rest of the band.  The first electric part of the song may have shifted the musical boundaries a fair amount, but it’s got plenty of charm.  Buchholz’s lead bassline is another busy one, and he plays a superb melody against Rudy and Roth’s twin lead guitar riffs.  With the return of Meine’s vocal, Buccholz’s bass takes the lead.  His playing is wonderful, capturing the aggression of his predecessor Lothar Heimberg, but shifting away from the jazz time signatures and constantly pushes things closer to a rock framework.  If you can tear yourself away from his playing, Meine is a strong performer here too, his vocals hinting at more future greatness.   The end of this rocky section would have been a natural place to end this song, with all players reaching their peak, but there’s more to come…although it feels somewhat out of step with everything that’s gone before.

At this point, the progressive hard rock structures disappear.  Taking a clean guitar tone, Rudolf Schenker plays shimmering chords against a spacey backdrop.  His only accompaniment comes from a soft organ line (strongly evoking Pink Floyd’s work, circa 1970) and Roth’s lead guitar adds long, high pitched tones – not unlike a theramin.  Just as you think things couldn’t descend farther into space rock/psychedelic territory, Roth delivers a lengthy monologue.  The music builds slowly eventually settling into something which sounds like a shameless borrowing of parts of Floyd’s ‘Saucerful of Secrets’ (though nowhere near as obviously as the coda from Radiohead’s ‘Exit Music’, recorded some years later).  As the track pulls to a close, Roth’s huge guitar notes bring a sense of climax, especially when placed under phasers and studio trickery. However, no amount of grandiosity ever escapes the feeling that this second half of the track was bolted on [presumably, this was Michael Schenker’s contribution before his departure].

This album features more than its share of great musical ideas, even if only a couple of the numbers reach genuinely classic status.  It’s an interesting development from the debut, but like ‘Lonesome Crow’ previously, it was not a commercial success.  However, Scorpions were lucky to have been given a recording contract at a time when nobody demanded instant success, and with the opportunity to experiment farther, some good fortune was about to greet our heroes from Hannover…

Just as the first two albums were hugely different from each other, the Scorpions’ third album, ‘In Trance’ was as different once again.  For that 1975 album, the Scorpions had settled on a very European proto-metal sound.  Many fans feel ‘In Trance’ is the first “true” Scorpions album, and in many respects, they’re right to do so.  While both ‘Lonesome Crow’ and ‘Fly to the Rainbow’ have their share of great moments, their mix of blues and hard rock is very of its time.  From ‘In Trance’ and beyond, there is no doubt of Scorpions’ musical intentions.  From that point on, the band experienced a huge increase in popularity and found themselves on the road to worldwide success.