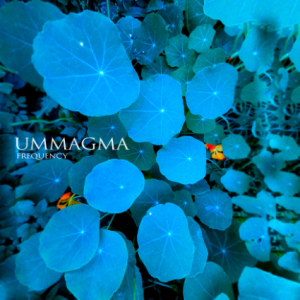 Ummagma are a dream pop/shoegaze duo based in Canada. Despite gaining favourable press from the Russian edition of Rolling Stone Magazine, like so many bands of their style, they’re somewhat of an underground act. Their third release, ‘Frequency’ comes three years after their previous works and, if anything, is a far more chilled out affair. The five original tracks on this 2015 EP are slow burning, almost other worldly in their construction; tracks with a minimalism that really expects the listener to sit and lend a very close ear, for the tiny details are often where the magic lies.

It’s not long after ‘Orion’ begins to emerge with the plinking sounds of 80s Tangerine Dream augmented by a very understated fretless bass, that it’s clear – very clear, in fact, these are particularly thoughtful and electronica sounds, but it’s as the track progresses, its best moments slowly reveal themselves. Vocalist Shauna McLarnon approaches each word in an understated style, not so much singing as vocalising the syllables in a charming and almost sleepy way, before the fretless bass shifts in favour of a coda that sounds like it’s being dominated by soundtrack-worthy nylon stringed guitar noodles. Having now set the mood, ‘Lama’ really shows what the duo are really made of; during this second workout, the electro backdrops are complimented by minimalist but perfectly formed soaring electric guitar lines, while McLarnon’s voice asserts itself just a little more. Allowing the higher registers to present themselves, her voice is still naturalistic, but almost floaty in its dream pop asperations – her best performance this time out – while the music is appropriately grander. The middle of the track introduces programmed drum loops, hugely reminiscent of 90s ambient classics, which most importantly brings a change in pace that not only grabs the attention and holds it, but also confirms any theories that the core of ‘Frequency’s best material owes a huge debt to Elizabeth Fraser’s collaborations with Future Sound of London back in the 90s. Listeners who found FSOL’s ‘Lifeforms’ an essential soundtrack to those days might just find an affinity with Ummagma, too. In terms of the style, this is almost perfect.

With a smoother approach, ‘Winter Tale’ combines a swooning and droning backdrop that alone would make the ultimate ambient “room colourant”. The other worldliness is spoilt just a touch by a casiotone rhythm track clicking away in the left speaker channel, but moving away from what seems to be a misjudged element, the track brings much more to love. The music is so minimalist – in the way it gently rises and falls, almost like a Jansen Barbieri Karn reworking of a Robin Guthrie soundscape, while McLarnon sounds great in her role as chief deliverer of all things wistful. Predictably, the filters and chosen effects mix beg comparisons with Cocteau Twins once more, but there are also elements of the quietest tracks by 4AD cult band Swallow and a dash of the earliest Mazzy Star, each important ingredients in the creation of this minimalist soundscape. Without delay, the short ‘Ocean Girl’ follows suit, allowing Alexander Kretov his only shot at vocals, a role he affords with a mumbling and understated approach. It fits the music, of course; in this case, closer to the dream pop acoustics of Mazzy Star than anything else 4AD related, the echoing voice, moody harmonica and strummed guitars sound almost like a reprise at the end of an album. There’s just a little more before Ummagma bow out, though, and in ‘Galacticon’ they taunt us with various drones, on a bleak tune structured from multi-layered minimalism. The overall coldness evokes a very European style of electronica, even a hearty throwback to Ummagma’s forefathers, as the mesmeric coldness of ‘Rubicon’ era Tangerine Dream meets the second side of Bowie’s uber-influential ‘Low’ LP. Like ‘Ocean Girl’, it’s very short, possibly even too short by similar standards, but then, it also knows it never needs to labour its point to make a statement.

Chilled out, swooning, ethereal, plinky-plunky, thoughtful…Ummagma are all these things. Like hearing the Cocteau Twins through a Future Sound of London filter with an occasional foray into 70s Krautrock, this EP is best heard late at night. The unconvinced will likely remain ever more so, but for fans of classy electronica, ‘Frequency’ is a real treat.