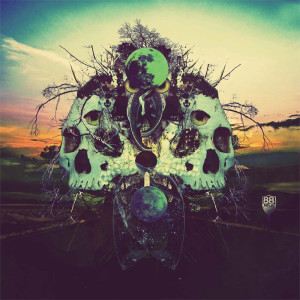 Hearing the opening notes of this debut full-length LP from Canadian stoner rock band 88 Mile Trip has the unfortunate effect of making the listener want to turn off the disc in an instant.  Frontman David Bell delivers the opening verse of ‘The Repressed’ a cappella style which, quite frankly, isn’t the best move. His huge voice has a natural tone, but much like hearing Glenn Danzig bellowing with no sense of occasion or restraint, in terms of over-singing, it’s incredibly overbearing.  He wails through each word at full volume and really it’s not easy to listen to. Maybe the band wanted to make a statement and chose such uncompromising beginnings deliberately, but there’s also every chance that Bell isn’t quite the vocalist he aspires to being.

Luckily with the arrival of the music, the appeal in 88 Mile Trip’s sound becomes more obvious.  A pair of downtuned guitars pummel a heavy riff while a bass rattles fervently, never stopping.  In terms of musical abilities in stoner circles, these guys have some decent chops – it’s just a shame that throughout this opening track their best attempts at recycling the best bits of Orange Goblin and Fu Manchu are drowned out by a vocalist who is both hideously overcompensating and far too loud in the end mix.  The slow and stomping ‘Awakening’ brings a slow Sabbathy riff and a great drum part that sounds as if it was recorded live in the studio, as well as a bass sound that’s very assured, but again, the vocal kills any enjoyment. Allowed a free rein to wail at length across fairly sparse verses, Bell’s performance is like hearing a cross between Danzig and Ian Astbury, though without the lasting appeal of either.

Don’t give up hope, though: there’s a couple of really top class tunes to be heard.  An eight minute workout, ‘Burn The Saints’ finds the band tackling a riff that could have been lifted straight from Down’s ‘Nola’ LP.  The riff powers, the vocals croon in a dark and intense way, the riff powers some more…eventually coming to full fruition when coupled with a deep noodling solo.  Musically, it would be straight from the Orange Goblin school of the Sabs-obsessed, but 88 Mile Trip are smart enough to add their own twist in the shape of a clean soaring lead guitar which adds a prominent blues slant.  The track’s second half, a fierce instrumental workout finds the two guitarists going toe to toe, but they’re eventually upstaged by a fiery bass solo – so obviously inspired by Geezer Butler’s work on ‘Behind The Wall of Sleep’, but unexpected within this kind of workout. ‘Serpent Queen’ – arguably the album’s best tune – works a Tony Iommi-esque riff, dressed in more Orange Goblin heaviness. Slowly and surely, the drudging guitar tone works the listener into the ground until the band switch gears for an upbeat instrumental section.  Atop a jaunty Fu Manchu groove, Hugo Gould Marks and Casey James trade solos – one in an assured bluesy tone, the other choosing a fuzzy distortion as per the main riff – and it’s absolutely superb.  Even so, they’re quickly upstaged by another nifty bass solo. Meanwhile, Bell seems to have settled down, and his performance – still with flourishes of Danzig crooning – suits the arrangement well enough.  If you’re one of those listeners who dips in and out of albums, make sure you make time for this track if nothing else.

In terms of sheer gusto, ‘I’m Not Mad’ brings an opening riff that’s groove-heavy, possibly one of the best of its type not performed by Fu Manchu (yes, them again).  Bolstered by hugely energetic drumming, thankfully not to reliant on overuse of cymbals, Eddie Riumin is a great player.  More Iommi-inspired bluesy links give a tiny bit of respite from the fast groove and overall, 88 Mile Trip show they have real balls.  It’s all constructed from tried and tested influences of course, but you can’t argue with the results when they sound this good.  The same goes for ‘Sacred Stone’ which bravely fuses fuzzy stoner rock with a punky speed and spirit.  The DIY production makes the guitars sound good and swampy, with the drums equally buried, but despite making everything sound as if it has been played back through a set of broken speakers, it’s got real guts.  At the point the tune should end, the band confronts their audience with a bass grumble so deep it could possibly be heard on a separate continent. Leading into a slow and oppressive riff that makes Crowbar seem like sissies, it’s clear that 88MT means business.   At the other end of the scale, ‘Song of the Dead’ tries a bit too hard to be atmospheric and comes up short.  Yes, some of those bluesy leads are well played, but in terms of actual tune, it’s all crunch and no bounce, while Bell – never at his best on slower tunes – belts each line like Jim Morrison with a megaphone.  There are flashbacks of the album’s opening track…and eventually, ‘Song of the Dead’ becomes song of the skip button.

Bell’s forthright vocal style might be distinctive, but at times, it’s so, so tiring.  It sounds better after a few plays to firmly tune in, but even so, it’s often too in your face. Stoner obsessives might still want to check this LP out for a few riffs, of course,  with ‘Serpent Queen’ and ‘Burn The Saints’ showing a lot of promise and ‘Sacred Stone’ possibly representing the most vigorous stoner rock you’ll ever hear. Although it’s easy to see how these guys scored support slots with Karma To Burn and Orange Goblin, despite its best efforts, ‘Through The Thickest Haze’, overall, is a hit and miss affair.