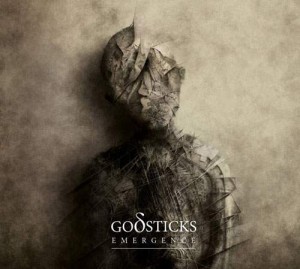 Mixing rock and progressive edges on their first two records, Welsh trio Godsticks carved out a sound that they could easily build upon.  Given the soaring melodies and atmospheres they’ve proved more than capable – particularly on songs like the lovely ‘Withdrawn Was Giveaway’ –  it’s hard to work out why they felt they needed a change of direction. Their third release ‘Emergence’ severely cranks up the heavier edges…and the over-riding sound is that of a grungy hard rock with occasional prog-metal quirks.  If you like that, that’s fine, but if you actually liked what Godsticks did before, it’s a crushing disappointment.  Gone are the clean lead guitars and any neo-prog string bending; gone are the crisp and tinkly melodies and basically anything that made Godsticks worth listening to…and in their place, a bunch of riff heavy, needlessly repetitive dirges.

With opening number ‘Below The Belt’ mixing a slightly downtuned riff with an off-kilter, almost funky guitar, Godsticks go in with one of their better tunes this third time out.  Although Darran Charles’s vocal is more of a grungy throwback – almost Scott Weiland-esque in its slightly nasal air – there are some relatively strong sounds here.  Heaviness and prog-metal choppiness get an equal footing and although, perhaps, the voice could be a little more melodic, the peaks in the performance give a sense of dramatic against the crunchy riff.  Closing this track with some power trio interplay, drummer Steve Roberts demonstrates an approach that has a hefty punch, particularly in the snare department, as he goes head to head with Charles – the frontman taking this opportunity to launch into a guitar solo with some sharp edges.  Holding everything together, bassist Dan Nelson clearly holds a similarly tough musical stance, but an overly loud and compressed final mix quashes any of his good work. Dropping the funky edge, but keeping a similarly full sound, ‘Ruin’ grumbles and chugs like a cross between the heaviest Riverside tunes and the Tremonti debut, always showcasing Darren’s love for a grubby riff.  About halfway through, however, the simple melody begins to sound needlessly repetitive and the fact that Godsticks can’t muster a decent chorus between them becomes sorely apparent.

By the third track, they have all but dispensed with any potentially interesting quirks and gone for flat grungy metal.  To begin with, the riff sounds like a bunch of guys emulating the heavier end of Kings X (never a bad thing), but since it never really wavers from its initial groove, it becomes extremely dull rather quickly.  A key change and a quasi-psychedelic harmony (again, possibly inspired by Kings X) threatens to move this number forward, but the melody is never really followed through.  Again, after a couple of minutes, the chances of feeling like it’s going nowhere are fairly high, since there’s absolutely no light and shade here.  The Kings X touches are welcome, but looking beyond that, quite frankly, it’s just so boring.

…And so goes the bulk of the rest of the record:  ‘One Percent’ offers some reasonable multi-tracked guitar work, but anything with any quirk is weighed down by a repetitive dirge that settles somewhere between Deadsoul Tribe and the irritating scattergun sound of early Disturbed. ‘Exit Stage Right’ brings a hard riff and almost nothing to back it up; the disjointed vocal is slightly annoying, while the heavy chug constantly distracts from any melodic quirks that may be lurking underneath. A shift into a more progressive mid section presents a wasted opportunity, as if the band are trying to stretch out and then lose their bottle at the last second.  Taking an ordinary riff and recycling it for what feels like forever, instrumental ‘Leave or Be Left’ is even more boring…almost unbelievable, then, that it clocks in at just over a minute long.  ‘Lack of Scrutiny’ promises something at the outset with a guitar motif that borrows a little influence from Rush – and rather more specifically Alex Lifeson’s work circa ‘Counterparts’ – but quickly reverts to sounding like a cast off from Stone Temple Pilots’ ‘Core’ spruced with an occasional staccato rhythm.  Better than some of the material, sure, but it really doesn’t sustain a full seven minutes, especially taking on board the average vocal and distinct lack of hook.

While these three guys can obviously play, ‘Emergence’ is one of those albums that wears thin very quickly and one that threatens to alienate pretty much anyone and everyone who liked Godsticks previously.  Once you’ve been impressed by a riff or two, the cracks begin to show:  by the third or fourth track, there’s a sense of a band not only repeating themselves but seemingly never having the confidence in their new-found heavier sounds to do anything exciting or out of the ordinary. A case of lots of crunch but no interesting melodies makes ‘Emergence’ a very forgettable affair indeed.