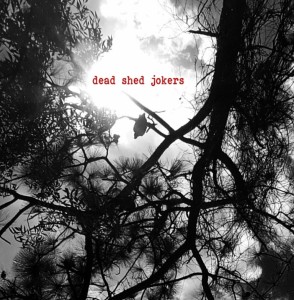 Following the release of their debut album in 2013, Welsh hard rockers Dead Shed Jokers were praised by UK’s Classic Rock Magazine and picked out as a band whose star was very much on the ascent.  Two years on, their self-titled follow up brings the rock in a hugely unsubtle fashion, mixing heavy blues riffs with a truckload of distortion, a post-grungy attitude towards the more angular and a frightening amount of bravado.

Within seconds of ‘Song For Daffyd’ making an appearance, you’ve already forgotten that this band somehow saddled themselves with a truly terrible name, the heaviness of the riff having proved a enormous and brilliant distraction. A likely bedfellow with UK heavy psych-rockers Transmaniacon and BlackWolf, while also tipping the hat to Sabbath and Budgie, there’s a hefty swagger throughout the track, guitars cranked, rhythm section cementing an equally strong hold, while frontman Hywel Davies wails.  And wails.  It’s definitely a strong voice, but his careening and overtly naturalistic style isn’t necessarily going to win everyone over in the same way the riff previously had.  Even so, it’s easy to see why with his confidence and sheer volume he ended up with this gig…and between them, these four musicians and their bluster grab the attention straight out.  Moving quickly into ‘Delay The Morning’, there’s a bigger shift towards balls-out hard rock, chunky guitars at the fore throughout, a faster pace meaning the forthright vocal sounds more in place, if not necessarily more focused.  As before, a tough arrangement and equally tough production job, often giving the material a live feel, brings out the best in the individual elements.

From thereon, things barely let up.  ‘Made In Vietnam’ blends a few bluesy licks with a really wonky arrangement, grinding guitars bring a lop-sided riff intercut with some particularly hard rhythmic qualities.  New bassist Luke Cook gets a brief spotlight turn where he cranks out a mean bottom end rattle showing  both toughness and dexterity, between the dual guitars of Kristian Evans and Nicky Bryant bringing plenty of discordant riffery.  Overall,  like huge chunks of this release, it never results in the easiest of listens, but for those craving heaviness, distortion and aggression, it brings plenty of the necessary.  Often quieter and more complex, heavy 70s grooves collide with math rock indulgences throughout the album’s real highlight ‘Love Is Diseased’. This five minute tour-de-force works some proggy, almost funky basslines and thoughtful sounds, before bringing in lead guitars in a Kyuss mould; in terms of riff, this one’s a tough cookie, but for the Jokers – a band who rarely seem to believe that less is more –  this is just the beginning.  Before long, multi-tracked riffs, crashing drums and another unhinged vocal all come together in a sledgehammer fashion, building to an uncompromisingly noisy climax of speaker-busting intent.    ‘Rapture In Riddles’ blends elements from all previous tracks and – at least at first – doesn’t appear to bring anything new, but in terms of groove, the band appear tighter when rocking out a funky groove, while in terms of guitar leads, it’s a high point, featuring some high pitched and very fluid lead work throughout.  If you’ve stuck with the album this far, this track could be a favourite within a few spins.

‘Exit Stage Left (Applause)’ finishes the release in an unexpected style, bringing things down to a more low-key mood. A clean guitar rhythm and understated piano line lay the foundations for a slow burner of a tune that hints at the theatrical.  This almost Who-like piece is very much at odds with the band’s heavier preferences, and while Hywel’s voice remains strong, the wailier end of his delivery occasionally appears unsettling, but the big, almost pompy mood would have certainly suited Roger Daltrey at the time of his debut release.  By the midpoint, the bass and drums arrive in a modest fashion, building to a big climax.  At the close, the distorted guitars bring a last chunky riff – far closer in spirit to the bulk of the material – and the band takes their final bow.

In terms of presence, these guys are set to destroy most of the competition – and in the live arena, that’ll certainly make them champions – but in terms of memorable material or easily accessible rock, Dead Shed Jokers aren’t exactly shy in wanting their audience to work to reap those listening rewards.  Even so, this album is worth checking out if you love big riffs that display both a youthful spirit and an old, defiantly retro soul.