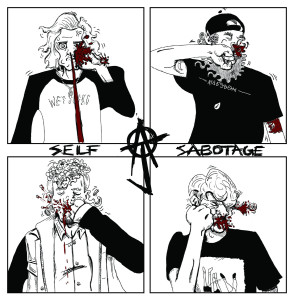 At the end of 2014, Anxiety Junkies, a DIY hardcore punk from Georgia (US), released their third demo. ‘Sorry’ comprised four numbers that put across the band’s intents in a very succinct and fuss-free fashion. It’s rough around the edges quality of the recording only heightened the intensity, but even so, the band made firm plans in the new year to enter the studio to make a more complete sounding recording.  Their first full-length, the fifteen track ‘Self-Sabotage’ is the result.

For those who may have been concerned that the results might just lose something when moving on from demo recordings can rest easy.  The re-recorded tracks – ‘Heartrate’, ‘Self-Sabotage’ and ‘Paranoid’ (from ‘Sorry’)  – retain their anger wholeheartedly; in the case of the title cut in particular, the drums have a hollow angry sound; the guitars buzz incessantly and the bass lurks somewhere within.  These things combined cement this band’s place as the natural successors to Gorilla Biscuits and Judge, bringing fantastic, timeless sounding hardcore intensity.  The re-recording of ‘Anxiety Junkies’ represents a vast improvement: the original download from 2014 sounds exactly like a couple of guys in a garage – only fair considering that’s exactly what it is – but the version included on this album really gives a great insight into the band’s progressions.  The vocals are rough but certainly more assured, while the addition of a bass part – sorely lacking on the previous recording – brings a grumbling sound that makes the Junkies’ anthemic theme song really stand up.

…And of the previously unheard songs?  There’s much to enjoy here, especially with the band branching out just a touch.  ‘Sadistic’ opens with a grinding, crying guitar that evokes the demon spirit of Greg Ginn before the band explode into a hardcore frenzy driven by a furious drum part, the three chord thrashing tapping into some fine old-school punk. ‘Decade 2’ comes across like the bastard child of Minor Threat and the Misfits by welding a chunky and guitar riff on the verse, bringing everything that’s enjoyable about this band in a rough and ready minute; ‘You Wish’ is an uber-thrasher that tests drummer Alex’s stamina to the uppermost limits in another DC hardcore homage, while the chunky ‘1,2,3,4’ brings the love for Black Flag in huge style.  Their vigour certainly relies on figures and styles from a time before these guys were even born, but in punk terms, their anger and intensity remains utterly convincing.

‘Empty’, an album highlight, kicks off with something a little broader as a garage rock guitar bustles against some impressive drum work.  While among the Junkies’ slower material, there’s no way it could be labelled slow, especially once the chorus flares up – and naturally it’s here they revert to type and go into all out hardcore thrashing, making it appear that there’s more depth to this minute and a quarter than there actually is.  Shifting the tone, ‘Messy’ allows bassist Dalton more space to crank his bottom end strings, with Alex rattling out a slower and more simplistic rhythm.  A side step from the hardcore norm, it provides a little respite before everything cranks back to top speed.  Fastest of all, ‘Crossdresser’ is musically impressive, but also represents this releases only real mis-step. While the lyrics might have been designed as perhaps a bit of fun, the attitude within appears intolerant of those choosing to adopt alternative lifestyles.  At the time of this disc’s release, it comes across as crass, childish and wholly unnecessary.

There are occasional fleeting flashes of other punk styles here, but hardcore purists need not fear, since the overriding sound is one which almost exclusively recycles inspiration from Minor Threat, Gorilla Biscuits and the earliest Black Flag.  Barely allowing time to pause and reflect, ‘Self-Sabotage’ is a fine – if ridiculously intense – thrash-punk frenzy. With fifteen lightning speed punk romps in approximately twenty four minutes, it channels the spirit of the 80s in classic, classic style.  …And if that sounds like something you’d enjoy, you almost certainly will.