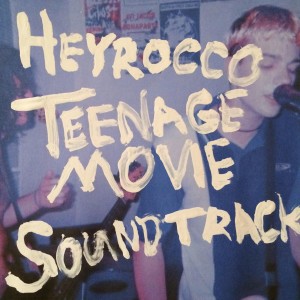 At their most aggressive, ‘Virgin’ sees Heyrocco employing a classic quietLOUDquiet approach, with an unavoidable influence from Nirvana.  Bands have channelled similar near-plagiaristic Cobain-isms many times previously, but few have managed to tap into sounds as enjoyable as this. The vocals during the verses come with an unsure Stephen Malkmus-eque wavering; maybe it’s that coyness in contrast with the impending noise that makes this such fun in a retro sense…or maybe it proves that there are potentially hundreds of bands who can do this better than Puddle of Mudd and with a teeny fraction of the budget.  Whatever it is, this is cool:  yeah, the influence is strong enough for you to probably spot that the chorus could just drop into ‘Heart Shaped Box’ at any second, but in terms of gravelly voices pitched against garage-based downtuned riffery, this ticks all the right boxes.   Shifting to retro sounds of a different kind, in this case a strong influence from the mighty Dinosaur Jr., ‘Alison’ showcases a giant wall of overdriven guitars.  The opening salvo rests somewhere between classic Jr and early Smashing Pumpkins and promises great things, before dropping away to reveal an almost unaccompanied vocal.  Within a verse, everything collapses and the song – if it can be called such – comes to an unexpected halt.  More than an interlude, this perhaps is the ultimate in leaving the audience wanting.

With a bunch of staccato chords and a 90s slacker vibe, ‘Melt’ is a touch quieter.  Here, again pulling elements from their big bag of recycled influences, Heyrocco come across like a Pavement–Weezer hybrid.  The twin guitars bring a friendly, familiar crunch and in retro alt-rock terms also a reasonable amount of melody, while the vocal – shifting between a nasal delivery and a wobbly sound of a man who sounds half asleep – recalls the slackness of many a college rock band, pepped with a distinct trill akin to a Brian Molko demo.  Once more, originality takes a leap out of the window, but the end results are an enjoyable homage to the mid-90s.  The album’s crowning glory, ‘What It’s Like’ hsa a much cleaner sound all round; ringing guitars evoke alt-rock for sunny days, while a rousing chorus settles somewhere between the power-pop of Gigolo Aunts and the Southern unease of the largely overlooked Better Than Ezra debut ‘Deluxe’, the latter having so much in common with Heyrocco’s geographical roots.  With this number, Heyrocco channel their talents into something far more distinctive and prove their mettle in the songwriting department.  By the time they top it all with a J Mascis-esque guitar solo, it’s obvious there’s a huge amount of talent burning within these three guys.

‘Mom Jeans’ plays the geek card to the max with another Placebo-esque jangler, it’s simple melodies eventually finding a way to nestle under the skin, ‘Jake Miller’s House Party’ mixes Seattle-isms with a Royal Blood tone and ‘Happy Denial’ really cranks the ringing electric guitars.  Each of these adds something to the Heyrocco canon, each enjoyable on their own merits…though, rather understandably, everything plays second fiddle to ‘What It’s Like’.

Like Leeds-based Pavement obsessives Take Turns, the works of Heyrocco will have no sway at all with anyone who had no time for Pavement, Dinosaur Jr., Superchunk et al in the early-mid 90s.  There is a nostalgic element to the band’s approach, but most of all – especially at the time of the ‘Teenage Movie Soundtrack’s release –  Heyrocco are here to bring great sounds to an audience who weren’t even born when these kind of slack guitar chops were commonplace.  There is very little filler here and it’s a decent first outing, especially sound-wise…but ‘What It’s Like’ – the cuckoo in this nest – strongly suggests they’re capable of even greater things.