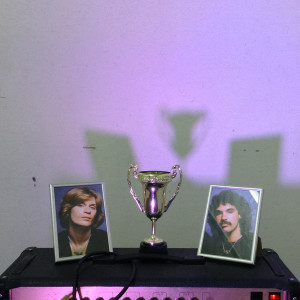 This time the band have gone all-out, extending their feedback drenched, distorted attack to a full album length eleven songs; ten previously unheard ugly children joined by the still great (and more accessible ‘Kellogg’s Wasps’ from the much earlier EP.   As before, Super Luxury make their intentions clear as crystal from the outset, when ’25 Metres’ lurches from the speakers via a slow and distorted bass sound, easily recognisable as the same one at the heart of the Cattle recordings.  After marking its presence, the rest of the band take pride of place – the drums crash with no subtlety banging through a steady beat, the guitars make squealing and squalling noises during the verses, while vocalist Adam Nodwell shouts almost as if from the other room, his performance largely almost lost under the din.  The slow, lurching riff that began the track is still going strong – and absolutely unwavering – several minutes later thanks to Tom’s great bass work, the whole piece pulling the strongest elements from both Super Luxury’s earlier work and the Cattle EP.  Shifting things up a couple of gears, ‘Constant Delicious’ trades in the Cattle-esque grinding for an upbeat slab of alt-rock driven by a circular guitar riff.  Under the riff – acting very much as a hook throughout – the drums jostle with a real presence, whilst a downtuned fuzz ups the noise quota and Nodwell screams like he’s about to burst.   Although there’s a garage rock bounciness to this number (largely thanks to those great drums), comparisons with The Jesus Lizard are likely to not go unheralded.

Cranking the guitars, the brief ‘Amazia’ teases at first with a straighter rock approach, but once the drums force their way to the front, there’s more angular noise to contend with.  Between the tussle of live sounding drums and more shouting, guitarist Chris marks his place strongly via heavy use of muted notes colliding with quasi-blues tones delivered with a metallic edge.  If this feels like a sideways step for the band, then the following ‘Hyperhidrosis’ – feeling very much like the second half of a two part suite – goes further out still, melding the band’s garage rock fixation with a speed and aggression much closer in spirit to 80s hardcore punk.  Two minutes of fury brings out the best in everyone, especially Chris in the guiatar depot, both thrashing their hearts out before (unintentionally) tapping into something that briefly sounds like the fast part of Led Zep’s ‘Dazed & Confused’.  This dalliance with punkier chops probably also acted as the instigator for one of the releases highlights… Boasting one of the best song titles ever, ‘Ian McKaye Made So Much Money Out of Fugazi That He Lives In a Solid Gold House…’ mocks one of the key figures from the 80s hardcore movement and any beliefs that straight-edge bands are solely in it for the fans and not to make a comfortable living. It does so with typical Super Luxury style.   Within the aggression, it’s perhaps this track that shows off Super Luxury’s best side as musicians.  The Jesus Lizard atonal qualities are in full force as are the other homages to US art-rock (Fugazi, early Melvins et al), but within the noise, Chris delivers some great guitar leads and drummer Hamish shows a flair for the hi-hats and complex fills alongside those moments where he’s insistent on smashing his kit into oblivion.

‘Salem Tears’ takes things down a peg or six, concentrating more on rhythms than distortion, resulting in something that sounds like NoMeansNo collaborating with Killing Joke.  The tight beats show a great love for post-punk with their mechanised coldness and the rest of the band fall in line accordingly.  Loud, hard and yet surprisingly focused – although if you haven’t made any connection with SL within the first couple of tracks, you’re unlikely to be swayed by this…as superb as it may just be. Not content with delivering a frightening amount of anger thus far, set closer ‘Crunchy Boy’ is frightening.  Three minutes of tune dearth, a slow and grinding, unrelenting riff pummels for what feels like forever – a Jesus Lizard inspired noise slowed to doom metal pace – with which SL know they’ve reached their extreme.  When its decided that their potential listeners probably can’t take any more, they tail off with a couple of minutes worth of crashing, amplifier torture and blasting noise…dials peaking well into the red.  As the noise comes to an end, the broken crackling sounds almost seem capable of destroying not only speakers but entire streets worth of stereo equipment.  In noise-rock terms, it is probably fair to say this is a job well done.

‘Ten Years’ presents a huge step forward from Super Luxury’s ‘Mystery Teen Thriller Drama’ EP.  As before, those not in tune with Jesus Lizard, earliest Melvins and/or Fugazi and their ilk are unlikely to find much to enjoy here, but the energy that comes from the band’s unrelenting approach really comes across in these recordings…as does the pure joy they clearly get from making such feral and ferocious sounds.  Noise rock doesn’t come much better than this.