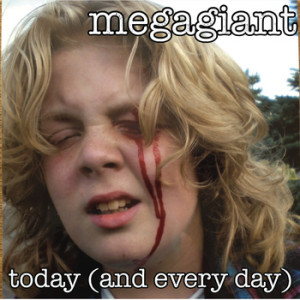 Hailing from the unlikely locale of Billings, Montana, Megagiant aren’t exactly at the heart of a rock ‘n’ roll metropolis.  Maybe their fore fathers moved there to raise themselves a lowly crop of dental floss…who knows?  Whatever, in association with DIY label Minor Bird Records, their 2014 release brings seven slices of garage pop/indie rock with a definite 90s persuasion.  There’s not necessarily a sharp sense of originality within its seven tracks, but the style and influences gathered by this band still holds up on a couple of tracks, even though this release is far from perfect.

A selection of down-scaled guitar notes kick off the fairly lengthy ‘Receiver’ with a simple but effective musical hook – something the band have the good sense to reprise between each verse for good measure.  In terms of 90s alt-rock, the simple chord thrashing which fills the bulk of the ensuing three and a half minutes is fairly unremarkable, though not as unremarkable as the lyrical content or the vocal performance.  Throughout this number, the vocals are flat and any melodies quashed by this uninspiring performance.  Megagiant could be any one of several thousand DIY guitar driven bands in this respect.  It’s a shame the cool lead riff isn’t quite enough to save face.  If at this point you feel Megagiant are nothing special – quite understandably on the face of things, it seems – don’t give up just yet…

It’s with the second track, ‘EOS’ things start to really take shape.  Kicking off with a clanging guitar chord, there’s something in the repetitive tones that recalls overlooked indie poppets Dressy Bessy at first, but as the drums crash in and the full band explode in an array of joyous indie noise, the over-riding love for Dayton’s Guided By Voices is hard to ignore.  Despite being very DIY, the full sound and recording budget outshines GBV’s classics ‘Bee Thousand’ and ‘Alien Lanes’ but even so the influence is obvious enough.  This possibly has something to do with Kelly La Croix’s slack vocal delivery – the unashamed naturalistic tones make no attempts at hiding any off-key bits and are somewhat reminiscent of sometime GBV man Tobin Sprout.  Unlike ‘Receiver’, the wall of jangle is approached with a sense of vigour, the vocals sound far more assured – the distortion only adding further to this energetic style, with a more impressive drumming performance from Nels Jensen.  At the point things start to feel repetitive, a backing vocal ups the ante with a call and response to fade.  Sure, it’s overly familiar, but judging by the rest of this release, it’s what Megagiant do best.  ‘EOS’ certainly should have been the band’s opening statement, since its far superior on all fronts.

Having picked up their audience, it’s time to wind them back down with the slow, chugging ‘Prairie Is An Island’, a number that owes as much to ‘Pinkerton’-era Weezer than anything else.  The slack vocals this time are bolstered by a warm bottom end, with Austin Finn’s bass finally gaining full recognition.  In three minutes, the band’s original intent barely shifts; the bass thuds, the guitars chug, the pace rarely changes.  For those who like 90s style emo, there may be something of note here…but for most, the results are a bit one note.   Sounding like a cross between a ragged Teenage Fanclub demo and GBV being quite frivolous, ‘Do I’ presents two minutes worth of fantastic power pop, a sixties vibe boosted by brave attempts at harmony vocals and a general sunny attitude.  Bouncy, positive, retro – three tricks that every good power pop band should have up their sleeve, and they’re here in abundance.  Joining those brave but wayward backing vocals, there’s even a rare foray into lead guitar work here too and a brief solo adds extra interest. Moving on, the chiming guitars and off-key vocals that provide the heart of ‘Bird To Land’ revisit a love of GBV and Superchunk, but find time to experiment with something more melodic than anything before.  The Big Star chimes and gentler approach aren’t a million miles away from ‘Bandwagonesque’ era Teenage Fanclub, and rather more specifically their single ‘What You Do To Me’, a number with which this particular tune also shares a lyrical simplicity.  It’s likable in its positivity (and brevity), but you’ll have heard other bands doing this kind of thing many times…and better.

The remaining pair of tunes are certainly worth checking out if retro sounds are your bag.  Just as ‘EOS’ hit the mark, the crunchy ‘Up To You’ shows that Megagiant can really deliver when they want to.  Shamelessly reworking a riff that possibly started out as The Who’s ‘I Can’t Explain’ this number places the band in the garage rock mould, their grittier sound more focused on guitar.  Hints of Brooklyn’s Greasy Hearts are heard as well as other touches of late 60s proto-punk and the results are great…but all too short.  Closing this collection of tunes, the brief jangler ‘Things We Used To Hate’ brings a wall of chiming guitars – nothing too flashy – and a late sixties melody that places Megagiant somewhere between Big Star and ‘Under The Bushes’ era GBV.  At the point you think there might be a step up to something a bit quirkier – maybe even a huge key change – the band bow out, considering their work to be done.  Much like the classic works of GBV or ‘It’s a Shame About Ray’ era Lemonheads, there’s no padding – just verse, chorus, out.  In many ways this is a succinct and perfect example of Megagiant’s musical style.   Those looking for something very 90s and perhaps a bit nostalgic should take a listen.

‘Today (and every day)’ is well meaning and any band that loves Guided By Voices quite so much can never be all bad, but there are honestly only a couple of tunes here that really stand out.  It’s worth having a listen for ‘EOS’ and ‘Up To You’ but beyond that, listening time would be better spent elsewhere.  For 90s retro jangle and a touch of GBV love, Sherbert should be sought out when the opportunity arises, while for shameless 90s recycling – and more specifically a shameless love for Pavement – Leeds-based indie crew Take Turns are far more rewarding.