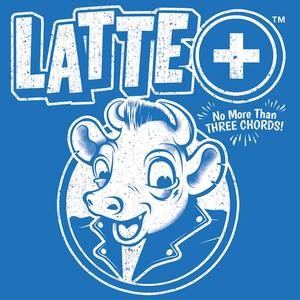 Hammering through sixteen numbers in barely over the half-hour, this delivers a particularly punchy set of songs, the band’s instrumental attack brash yet melodic (in a punk sense) at almost every turn.  An instant stand-out, ‘Anyway I Wanna Be With You’ is a loving Ramones pastiche, a fast romp through Phil Spector inspired pop delivered at a particularly jaunty pace.  Knowing there’s much recycling to the sound, Latte+ take it a step further, increasing the focus on the bubblegum elements by introducing a xylophone for an unexpected twist.  Elsewhere, the tune hones in on a shamelessly singalong chorus and some well-crafted muted chords in the bridge section.  For the style, it would be fair to say it is practically perfect.   Despite taking a lyrical stance best described as a tad confrontational ‘So Long Motherfucker’ (“so long, I will hate you for the rest of my life!”) manages to remain catchy and – more importantly, fun – by tapping into The Queers’ typical irreverence.  Top punk-pop riffing the order of the day once more, while vocalist Chicco delivers each line with the required balance between arrogance and slyness.

‘She’s Gone Today’ combines a fun, summery hook with a riff that really thunders.  With speed and absolute precision, the band chug through a minute’s worth of absolutely frantic punk, before tailing off with a twangy melodic coda highlighting a lead guitar with a great tone.  Keeping with a musical theme, ‘I Wanna Be Like Steve McQueen’ is a frantic thrasher, much akin to Screeching Weasel’s ‘Count To Three’ (and a handful of other ‘Television City Dream’ tracks), allowing a shouty vocal to dominate – something that becomes particularly effective via a particularly aggressive backing vocal.  Employing an excellent rattling bass and chopping chord progression that again borrows from Ben Weasel, ‘Gigi The Fascist’ brings more succinct punk, tipping the hat to the Ramones classic ‘Havana Affair’ in the drum depot. Like so many bands that have been inspired by Joey and Johnny, though, Latte+ take the core ingredients and speed them up substantially, something at its most direct on ‘It’s Okay For Us’, one of the best Screeching Weasel songs that never was.  That said, it’s hard to imagine the ever-irascible Ben Foster offering his listeners anything so well-rounded at the time of this album’s release…

In terms of throwing in a couple of twists, ‘Here Comes Summer’ brings forth a surprisingly disjointed verse riff before going full-on punk-pop on the chorus, while ‘Striped Girl’ brings unashamed Ramones riffs and a hooky chorus but peps them up with a homage to surf music in the bridge and brings an extra 60s twang at the close.  Both numbers are excellent additions to the Latte+ catalogue, even if not quite as blissful as ‘Anyway I Wanna Be With You’. The remainder of the numbers on ‘No More Than Three Chords’ – a record much more musically adept than the tongue in cheek title implies – work around a fairly rigid recycling of Ramones homages, often served with the kind of punch akin to fellow Italians The Apers. In terms of hooks and general clout, however, it’s a record that never sells the listener short and, most importantly, doesn’t feel needlessly repetitive.

‘…Three Chords’ is an album that doesn’t always take itself too seriously, but at the same time showcases some really great performances.  It may represent punk-pop by numbers for the most part, but it has no filler and comes with a far better sound than any of their prior releases.  For Latte+, a band with more than enough gusto to win over any punk-pop fans willing to listen, the bigger budget and switch to English means this album is a potential game changer.  In the words of Killing Joke: no way out but forward go.