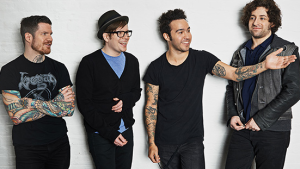 Fall Out Boy released their sixth album, the much anticipated ‘American Beauty/American Psycho’ in the UK on January 19th and have also announced a set of live dates.

At Real Gone, we still love ‘Under The Cork Tree’ no matter how old it gets, but with all the excitement surrounding the new release, we want to know how do YOU rate the new album overall? Is it an instant hit, or is there an older FOB work you just can’t say goodbye to?

We have TWO polls for you! You can choose one answer in each and we’d also love you to share you opinions in the comments below. Polls close at midnight on Sunday 1st February.

WHICH FALL OUT BOY ALBUM IS YOUR FAVOURITE?

WHICH IS YOUR FAVOURITE TRACK ON 'AM/AP'?