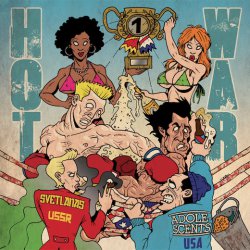 This 2015 split brings together four previously released tracks from a couple of great punk bands.  Like most great splits, each band represents a different country and in the case of Hot War, the US and Russia come together in a full throttle punk face off, clawing chunks from each other in a ten minute bout.

Adolescents will not need an introduction for many punk fans.  Active for thirty five years at the time of release, the Californian troupe were close peers of Bad Religion at the time of formation and have gone on to influence many bands over the years, most notably million-sellers The Offspring.  While Bad Religion went on to become a world force of punk rock, driven by Greg Graffin’s atheist-with-a-god-complex confidence, Adolescents remained far more cult.   Taking one listen to the brilliant ‘Forever Summer’, it becomes obvious that these guys are up there with the best, and they’re playing up their influence upon The Offspring about as much as possible by churning out their own excellent Offspring pastiche.  On this track the three choppy chords come fast and hard, each one flourished by an echo-driven twang, complimented perfectly by Tony Cadena’s snotty delivery.  A simplistic chorus only needs to be heard once or twice before settling in forever, but here the appearance of a counter-vocal adds melody aplenty, leaving the feeling in places of a more melodic Pennywise track.  Hitting harder, ‘Fukoshima Lemon Twist’ delves deeper into a punk groove – Cadena’s voice happily stepping up to the task with a more ragged delivery, while shrill rock ‘n’ roll guitar lead channels the best works of Bad Religion, resulting in something that sounds like Bad Religion with the fretboard dexterity of East Bay Ray and New Bomb Turks.

Bringing as much intensity, but arguably less accessible, Svetlanas are fast and aggressive and totally uncompromising.   On their pair of tunes, the punk is more of a shredfest, hard chord progressions dropped with the minimum of fuss, while vocalist Olga yelps and sneers with a heavily accented but very distinctive approach to the vocal, much like Exene Cervenka affected by Zelda from Terrorhawks.  If you can get past that, both ‘Tales From the Alpha Brigade’ with its deliberately provocative “fuck, kill, rape” refrain and scorching lead guitar and ‘Step Back’ with a killer riff and chunky bass riff show why this band – allegedly banned from Russia and now relocated in Italy – should not be ignored.  An unhinged vocal combined with an early Circle Jerks styled riff easily makes ‘Step Back’ the strongest of their numbers, bringing both a familiarity and an arrogance that deserves to propel the band farther.

Both tracks have been issued elsewhere, sure, but that doesn’t lessen the impact of this 7” split.  Each band is on fire with punk-fuelled ferocity, so if you’re new to either act, or else haven’t checked out the full-lengths from which these recordings are culled, ‘Hot War’ makes for a pretty intense primer.