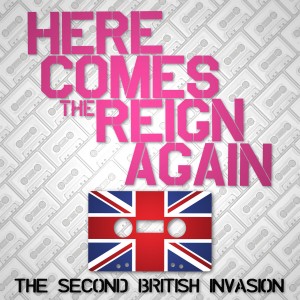 Across this fairly comprehensive journey into the world of 80s radio, you’ll encounter previously unheard covers of some well loved tracks – tunes that are ingrained into your subconscious, tunes you might associate with school days, with teen movies, big hair and shoulder pads or maybe even with Thatcher’s encouragement of selfishness and greed.   You’ll also encounter many power pop heroes, a few of whom give near note perfect renditions of those classic tunes.  The faithful are cool, but thankfully in the name of entertainment – both good and bad – there are many performers here who’ve been a little more daring…

Unsurprisingly, it’s ex-Soul Coughing man Mike Doughty who has taken some of the biggest liberties with his chosen number.  In the hands of Frankie Goes To Hollywood, ‘Relax’ was a funky, danceable tune that – alongside a couple of the band’s other hits – almost single-handedly defined the era.  Doughty, however, has literally thrown the Frankie/Trevor Horn musical arrangement in the bin. Gone are the danceable rhythms, the multi-tracked pop sheen and most of the recognisable music.  Armed with an acoustic guitar, some drum loops and echoes, he really goes to town.  His voice is unmistakable – like anything Johnny Cash covered instantly became the work of Cash, so it is with Doughty, his accented drawl sounding effortlessly cool.  He keeps much of the vocal phrasing and melody in his vocal so to make it as much like ‘Relax’ as he can, but the end results are disarming…and brilliant.   The always charming Mike Viola takes Tears For Fears’ pop classic ‘Everybody Wants To Rule The World’ and strips it back to acoustic softness, almost bare bones voice and guitar.  Those who enjoyed his ‘Acousto De Perfecto’ release will find this equally joyous, as his voice takes centre stage over solid acoustic strums and occasional pizzicato strings.  There will be people out there who’ll find this an essential purchase based on these two tracks alone.

Not so much an interesting take on a well known 80s track but also a definite improvement all round, People on Vacation – a power pop troupe featuring Bowling For Soup man Jaret Reddick – tackle Bananarama’s ‘Cruel Summer’ and come up with a real winner.  This full band arrangement is really classy – with a mix of electric and acoustic guitars, piano and brimming harmonies, it’s power pop gold, much preferable to the disposable arrangement given to the original.  There are solid performances from all involved…and a killer guitar solo to boot. Vocally, it almost goes without saying that the slick and professional approach afforded to this recording is streets ahead of the ‘Nanas “three girls on a karaoke machine” sound… Maybe these guys could re-record some other Bananarama hits?  The world would be a better place for it.

Cult singer songwriter (and brother-in-law of the brilliant Daniel Tashian) David Mead takes on Duran Duran’s ‘Save a Prayer’ and  like Viola, he’s wisely decided that less is more.  The rhythms are thin – almost a casio samba, leading the rest the arrangement veers towards the easy listening for increased cheese-factor. Mead’s vocal, meanwhile, is naturalistic, gentle even; he knows exactly what he’s created here and while the kitschy approach could fall flat, his confidence pulls this through and makes it another enjoyable listen. He’s not been as brave as Eytan Mirsky and Alyson Greenfield, however, who between them twist Howard Jones’s synthpop ditty ‘No One Is To Blame’ into a slightly cheesy cod-reggae workout.  It’s not necessary a cover created with longevity in mind. Their combined vocals should provide a nice contrast with each other, with Greenfield’s higher, purer registers providing a stronger element, but the end mix is pretty shoddy – it’s hard to listen to the individual voices for any length of time.  The reggae elements don’t have any real depth or punch, but all the same are a bit too reggae-centric for the pop purist.  You’ll find yourself wondering what they might have done with ‘What Is Love’, ‘Pearl In The Shell’ or the classic ‘New Song’…but, chances are, you’ll probably never want to endure this more than once.

There’s fun almost guaranteed when joining Jim Boggia & Pete Donnelly for their rendition of ‘Goody Two Shoes’ (originally by Adam Ant).  The drums bustle along with an upbeat air – slightly slower than the famous version – while the mariachi horns are recreated with the help of pub piano.  It’s the piano part that makes this so enjoyable, although a few naturalistic harmonies filling the second half also highlight the talents of these two musicians.   Cliff Hillis recreates Nik Kershaw’s ‘Wouldn’t It Be Good’ without taking too many liberties and as such his offering among this comps more forgettable performances.  He’s a great singer, but there’s no imagination in this recording overall.  It’s almost karaoke-like in its safety for the most part and a few horns don’t really lift things to that required next level.   Bleu’s ‘Don’t You Forget About Me’ is a contender for “biggest sound” as a wall of keys and whammy bar guitars assert themselves on a faultless recording.  He’s recreated the thin 80s drum sound very well and his bombastic vocal range could easily take on Jim Kerr.  There are 101 things he could have done to make this truly his own…but he’s so obviously decided that since it’s such a great song, to meddle with it would be extremely churlish.

Also worth checking out are The Nines, whose recording of Talk Talk’s ‘Life’s What You Make It’ is tasteful and traditional with the distinctive piano motif out front where it should be (taking a cue from Bleu – you can’t improve on perfection) and Wham!’s ‘Freedom’ reworked by The Davenports into an instant classic, taking the soul-pop tribute and delivering it as a power pop guitar workout worthy of Gigolo Aunts or The Tories.  Sometime Posies man Ken Stringfellow’s disturbing ‘Digging Your Scene’ is a minimalist dirge that bears little resemblance to The Blow Monkeys and is truly, truly nasty, while singer-songwriter Rachael Yamagata takes the pop-reggae of Culture Club’s ‘Do You Really Want To Hurt Me’ and makes it seem like a suicide note dressed up as piano balladry.  These two numbers are absolutely marmite constructs – some of you will love them, but for pop thrills, they’re very much a one-note downbeat affair, especially the case with Stringfellow’s deliberately obtuse recording.  Secret Friend’s cover of ‘West End Girls’, meanwhile, could have been one of the jewels in this collection, but falls very short of the mark – possibly challenging Eytan Mirsky for poor judgement.  The first part of this cover has a few synth sounds that are almost spot on compared to the Pet Shop Boys recording and at first it seems – like Bleu – they’re about to drop something faithful, but as the track gathers momentum, they veer off into their own world. A few extra noises prove a little intrusive by the end of the second verse and a little later – round about the point you think they should have packed up and gone home, in fact – noises fade in and out while they pay a quick homage to Hot Butter’s euro-synth hit ‘Popcorn’.  That’s a pretty cheap shot.  Returning for a couple more verses, the vocal filters stoke up farther until the point this just becomes irritating.  Hey…thanks for wilfully ruining one of the most perfect pieces of 80s pop, guys – maybe you could trash Jane Wiedlin’s ‘Rush Hour’ sometime, or Fleetwood Mac’s ‘Little Lies’ and really show your lack of respect for the decade?

Elsewhere, you’ll discover Madness tackled with multi-tracked vocals (starting well and losing something in translation), the Eurythimics sounding cold and aloof but oddly cool, a solid new wave/pop rock take on Billy Idol (no real imagination, but lots of enthusiasm), a spooky interpretation of a Kim Wilde classic and the ever-great and forever-missed Kirsty McColl dressed down as an easy listening Wings tribute.

A sprawling compendium of musical nuggets, this is far too much to take in all at once, but dipping in and out, you’re guaranteed to find a few new bands with unchartered back-cats to explore and (hopefully) enjoy.  In terms of bringing cult artists to the fore, ‘The Second British Invasion’ scores huge brownie points for attempting to spread the word.  You want fairly faithful renditions? Check.  You want retro? You got it.  You want interesting takes on a few well-loved tunes?  Look no further.  You want a couple of things positively ruined for good measure?  Hey, some people seem happy to oblige!  Compilation discs are rarely all essential listening due to their very nature, but it’s always a pleasure when the good outweighs the bad, as it does here. With twenty seven tracks and at least a dozen classic previously unavailable recordings, this double disc set is a must-have for power pop fans…even with the flaws.