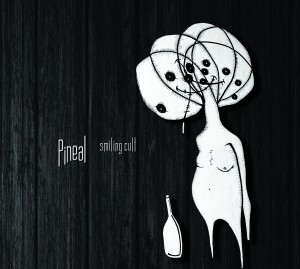 With no time to adjust, the opening number ‘Theta’ lurches from the speakers with truck-like force. Slow distorted guitar chords growl from the left speaker channel before a barrage of drums (courtesy of Nigel Boettinger) and a dark bass anchor intensify the sound and quadruple the volume.  The main riff is a lumbering doom-inspired chug and brilliant with it; the lead vocals shift the focus from Electric Wizard and make Alice In Chains comparisons inevitable, with a disarming coldness delivered with each passing line.  There’s no real change in pace here, no unnecessary flashiness, not even a solo to speak of.  The riff is all…and the riff is king.  Pineal know this and exploit that potential throughout.  A strong start, but ‘ADL’ shows off an even more talented band as they take their dark chug and mix it with a choppy time signature, this time muting the excessive guitars in a fashion that allows the bass to take more of a dominant role.  …And it’s a wise move, since Phil Pieters’s bass comes with all the subtlety of a woolly mammoth, his four strings pounded heavily, thus ensuring maximum downtuned rattle can be heard almost throughout.  In terms of song, you’ll struggle to pick out any over-riding melodies or hooks, but once again the riff is a crushing gigantor, designed to destroy anything foolish enough to step in its path.  This hard blending of Alice In Chains, Goatsnake and Tool may not always be a hundred percent original, but it’s very impressive.

With ‘Acerbic’, the intensity is cranked farther thanks to a slow, grinding and repetitious riff filling an intro that seeming goes on forever.  This has the potential to make the previous tracks appear lightweight in places which is no mean feat. Even with the later introduction of the vocal – here, the Staley-isms partly traded in for a louder, more abrasive delivery – things really don’t lighten up too much.  In terms of overall sound, it’s fantastic doom metal all round, veering towards sludge. As such this number has more than enough power to win over many listeners for whom these metal-subgenres rank highly.  There’s zero chance of winning over anyone else of course, but that’s probably Pineal’s intention.  In all seriousness, this is absolutely fantastic, first-rate doom – and the sound of a band brimming with confidence.

The other three tracks bring a mix of each of these traits – each giving something for doom fans to enjoy. ‘Civil Obedience’  brings four sludge filled minutes with a fantastic tribal drum sound throughout, while a more low-key vocal stays more in keeping with the stoner rock elements at first, but eventually resorts to a few Staley-isms.  For those who love a slow, grinding riff this is sure to deliver.   Slower still – tapping into the kind of doomy atmospheres Witch Mountain are capable – ‘Somatic’ crawls with a real menace, as feedback drenched riffs lumber as slow as possible while still maintaining a semblance of tune before developing a grungier sound.  In terms of riffs, general vocal presence, attitude and all-round heaviosity, this is the EP’s best track and certainly recommended for fans of the ultimate alternative sludgelords (the) Melvins.  Almost a burst of sunshine after such oppressive riffs, ‘Tides’ kicks off with a ringing guitar motif.  It’s still downtuned, but the more spacious approach gives a greater feeling of lightness and hints at a more classic rock sound.  Fleetingly, of course, since there’s a whole world of grunge throwbacks just over the hill.  That’s not a complaint, of course, since Pineal have really found a sound that – although often derivative of their favourite bands – really works for them and, in turn, they’re great players.

In short, if you love it heavy but aren’t necessarily too concerned about originality, Pineal should be high on your priority list.  The influences are certainly obvious, but then so is the band’s desire to mash their listeners into a pulp with their near constant barrage of slow, sludgy riffs.  Recommended.