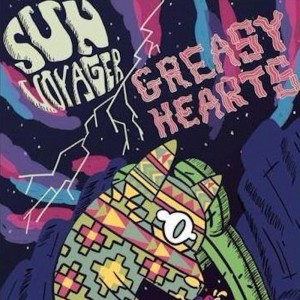 These three songs, in many ways, bring together each of the Greasy Hearts preferred recording styles.   First up, ‘I Don’t Mind’ is a distorted, no-nonsense rocker that’s heavy on the guitar, complete with plinking effects in the right channel designed to recall a rock ‘n’ roll piano.  Pete Wilderotter’s vocal is rough and ready, but nowhere near as raucous as the guitar leads that burn up the middle of the track.  Taking the original Greasy Hearts blueprint and cranking the intensity up to eleven and a half, it’s like being in the presence of The Nerve Agents re-recording Rolling Stones tunes from 1973.  Settling into a more sedate groove, ‘Let Me Try’ is more of a showcase for drummer Gabe as he lays down a solid beat, over which the feel-good r ‘n’ r blossoms.  There’s plenty of distortion and a simple one line hook for all of your shout-along needs.  If you’re familiar with the band’s previous works, this brings more of the same…and is most welcome.

For their last offering, Greasy Hearts really stretch the boundaries of their garage rock roots.  ‘Pick Up Your Heart’ starts gently at first, a bluesy groove allowing muted notes to take hold.  Over the softest tune in the band’s canon to date, the vocals stretch themselves accordingly allowing the listener time to reflect upon such unexpected mellowness.  Then the fun really begins: the riff distorts, the band crank the amps and really start to cook.  After a verse or so’s worth of meaty garage grooves, the band go all out for a climax, delivering riffs at a punky speed, drums crashing, riffs a-flying, needles peaking well into the red for extra harshness.  It’s almost like hearing the entire Greasy Hearts catalogue distilled in a three minute time capsule.   It certainly bodes well for the future.

The other side of this release marks an overdue “proper” return for Sun Voyager, a NY band whom released an EP at the tail end of 2013. They had a couple of single tracks and demos appear earlier in 2014, but none of those tracks are reprised here.  In some ways, that’s excellent since it gives an idea of creative growth and moving forward; on the other hand, it’s a shame that the band’s single ‘God Is Dead’ (released just a month previously) isn’t actually afforded the luxury of being part of a bigger package.  That tune really raised the bar in terms of Sun Voyager’s musical bredth. Perhaos more akin Blue Cheer and early Monster Magnet than The Godfathers or The Monks, the three songs on this cassette’s Sun Voyager side take us on an old-school riff trip. It’s time to strap yourselves in and set the controls for the heart of the sun…

‘Desert Dweller’ has the energy most would associate with King Pizza bands, but there’s a bigger scope in sound from the outset. Steve’s guitars clang with abandon, but there’s more bass than most of this band’s peers, as Mersch gets his fingers all over the four strings, his playing still maintaining an obvious presence despite the wall of sound placed over the top.  Multi tracked guitars bring equal amounts of noise and groove-laden lead, while vocalist Sees wails almost incoherently – his voice subjected to so much reverb it almost sounds like an extra instrument in places.  This firmly sets the tone for Sun Voyager and if you liked this tune, you’ll absolutely love ‘Mind Maze’.  This second slab of rock has a slightly flatter approach; the band hit a groove in an instant, but never really deviate from that original musical path.  There’s no time for quiet atmospheric detours, just a rattling good riff and crashing drums.  Somewhere behind the lovable garage rock din, Sees pours his heart into the microphone, but again its near impossible to ascertain any lyrics.  They don’t care of course – their biggest aim is to drive their riffs home in a direct manner…and here they succeed admirably.  Another mention for bassist Mensch is necessary, as again, the complex bass riffery on this number really gives things an edge.  Finally, ‘She’s A Monster’ brings what’s essentially more of the same.  If Sun Voyager haven’t won you over by this point it is entirely possible they never will, but there’s no denying either their general confidence (bordering on the brash), or their commitment to their fuzzed up retro trip.  Crank the volume and enjoy – that seems to be not only the best option here but the only option.

This release brings an interesting insight into both bands.  Greasy Hearts show more range than ever and even if a couple of their best songs reside on other releases, ‘Pick Up Your Heart’ is absolutely storming, while the Sun Voyager offerings are a slight shift from the heavier proto-metal sounds of their ‘God Is Dead’ single from earlier in the year.  It’s probably fair to say that a couple more songs from each would have definitely been welcome, but there’s just enough here to whet the appetite of new listeners and committed KP followers alike.  If you like what you hear on this split, be sure to seek out the bands’ other works – this is just the tip of the lo-fi iceberg!

Check out a track from both bands below.