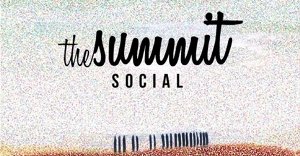 Taking huge musical cues from Kings of Leon, The Killers and early Franz Ferdinand, on their 2014 EP ‘Social’, Kansas City quartet The Summit present six chunks of guitar driven pop-rock.  Their general hooks are focused on radio play and occasionally things work in their favour, but there’s a homespun rawness to their recordings which suggests this band – and their song craft – is still very much a work in progress.

Lead track ‘Ante Up’ begins well, with a ringing guitar fading in, before showing off a track that suffers from a slightly thin drum sound and a particularly wayward vocal.  The guitars are in hand to bring a great lift to a rather ordinary song, their general approach simple yet timeless.  Looking beyond that key musical ingredient, the track is anchored by a weighty 90s style alt-rock bass, but these solid foundations start to crumble once frontman Michael Hilboldt Jr starts to sing: insistent on bellowing almost every line in the manner of Kings of Leon “singer” Jacob Followill –  his voice is the dictionary definition of acquired taste.  Holding everything together, drummer Eric Quitala does little more than mark time, but is rarely required to bring much else to the table.   Aside from the contribution from guitarist Tanner Pinkerton – whose sense of the melodic is absolutely crucial in making this work at all – this is not the most auspicious start.

Thankfully, ‘Torn’ is far more confident, showing off a better side to the talents from most involved.  The core of the material may be similar, but there’s much better care taken with the final arrangement.  The drums take their two-step thump and occasionally brave an interesting fill; the guitars adopt a full presence with a clean and circular riff, while a warm bass fills the remaining space.  Announcing his presence in a huge fashion, Hilboldt delivers his first line like a foghorn.  If the opening track presented the voice of a man that perhaps needed reining in, this performance borders on the atonal.   Breaking the bog-standard indie-rock up with something a little lighter during a mid-section helps keep the momentum going, the instrumental approach being far preferable, but it’s not until the closing bars the full potential within the band is felt. The jangly rock elements take a step up, before changing tack entirely, finishing with a great instrumental section where Pinkerton launches into a great old-school guitar solo with a very impressive 70s tone.  This feels like a piece of music that’s been written separately, but it works well – and ensures this track is halfway memorable. The promise built up throughout the first two tracks is quickly tarnished by ‘Speed’.  The bulk of this track is a lumpy dirge that’s rhythmically flat…and vocally much worse.  There are glimmers of hope when the drum parts include a few bass pedals and snare fills (otherwise it’s just uninspired thudding yet again), but the bass work is solid  yet unimaginative, while a selection of backing harmonies fall flat in their attempts to distract from a bad singer. while Everything manages to peak at “uninspiring”.

‘Cave’ pushes Pinkerton into the spotlight once more as he delivers an overdriven guitar riff that’s a dead ringer for a ‘Michael’ by Franz Ferdinand – both in style and tone.  With a few new wave synths used in an unsubtle manner and multi-tracked choppy guitars to flesh out the instrumental finish, this becomes a reasonable homage to the NME fillers of 2004 and shows The Summit to be a band with possibilities.  ‘Come On’ attempts to ride a similar wave to what feels at first to be lesser effect due to a less immediate riff. However, the presence of constant “whoas” in the backing vocal department and a rhythmic choppiness akin to The Killers ensures a couple of strong elements catch the ear from the very first listen.  In terms of guitar break, meanwhile, Pinkerton gives things a real sense of edge by filling several bars with the same chord churned out in a buzz-saw fashion that’s in contrast with this number’s poppier elements.  In this pair of numbers, we hear the strongest overall potential; the vocals need work, while the tunes – although not especially original – have a solid foundation from which The Summit could build.

By the time the last track ‘Let Me Slip’ finds its feet, things are starting to feel depressingly familiar as the band recycles elements from previous numbers with no real spark. The chunky guitar parts pass muster, but there often seems little beyond that to inspire return listens.  In both ‘Cave’ and ‘Come On’, The Summit have already proven they are capable of delivering similar results in a superior fashion.  The music holds its own – though rarely anything more – but, yet again, the vocals are so intrusive (especially by the time the title line is bellowed incessantly towards the end), it’s all bordering on being hard work…certainly nowhere near as inoffensive as The Summit’s chosen brand of guitar rock often ends up sounding in the hands of other bands.

‘Social’ shows a band with a great deal of enthusiasm…and the teeth that occasionally bare themselves during ‘Torn’ and ‘Cave’  also suggests The Summit are capable of more than they give here.  However, without the presence of someone who can actually hold a tune when given a microphone, the overall appeal is always going to be somewhat limited, whatever the musical preferences.

‘Cave’ can be heard via the Soundcloud stream below.