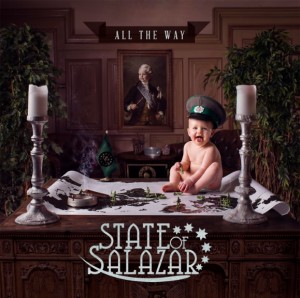 An instant stand-out, ‘Marie’ begins in good stead with a quick flurry of keyboards bearing a signature 1982 sound, before dropping into a light, very buoyant groove reflecting key moments of Toto’s early output.  The well-constructed arrangement gives almost equal space to each of the instruments, while Nygren’s vocal curls and soars whilst always remaining melodic.  It’s quickly obvious he’s holding back just a little, but this allows his performances to be markedly different from those of his other band.  Interestingly, this number lacks an obvious lyrical hook, but the music – those keyboards especially – lend it such a memorable melody, that’s all that’s required to make it fly.  ‘Adrian’ recalls another early 80s gem, this time resting somewhere between a tune from Frank Stallone’s fantastic self-titled album (itself an all too overlooked AOR classic) and ‘Good Morning America’ era Charlie.  The occasional lead guitar breaks between the verses are classically understated yet well-placed enough to catch the ear, but it’s the vocal performances that shine throughout.  Nygren’s lead voice straddles tough and melodic in equal measure, while a whole bank of harmony vocals fill the chorus somewhat jubilantly.  With each element delivered in a near perfect homage to melodic rock’s classic past, a huge chorus ensures a near instant memorability.  In short, this track represents everything that was once good – and occasionally still remains so – with regards to the subgenre.

The title cut allows the rhythm section of Johannes Hansson and Kristian Brun time between verses time to indulge in something more complex – in this case, some late 70s jazzy inflections show both to be great players.  When taking that flair and combining it with Johann Thuresson’s lead guitars – particular impressive during the featured solo – there’s no doubt about this band’s talents.  Looking beyond the instrumental prowess, there’s never much attempt to combine these moments with anything too groundbreaking, but even so, their choice of harmonies and simple chorus shows a deep love for old AOR records and yields a classic track in the process.  The album’s best number – and bear in mind it’s a tough call for that particular award – ‘Eat Your Heart Out’ is staggering. Just as State Cows nailed the westcoast AOR sound laced with Steely Dan’s wondrous grandeur, State of Salazar appear to have uncovered the secret of Toto’s greatness and wish to share it with everyone.   A loving homage as opposed to mere plagiarism, this also shows this band not only to be gifted players, but also classy arrangers.  The musical arrangement on the verse couples muted rhythms with a strong melody all round – the sound of an imagined 80s soundtrack – before dropping back to a slightly funkier chorus, complete with horn sounds placing things as close to Toto as is actually possible, at least without enlisting the help of Bobby Kimball and Steve Lukather.

‘Catastrophe’ captures State of Salazar rocking out a touch more than usual.  Following a barrage of keys – a recurrent element between each verse – the band crash in with a four-four punch.  The music is instantly familiar, but the sentiment is not:  while such an arrangement would often be the setting for optimism, the band takes a triumphant tune and adds a hugely unexpected lyric.  Throughout, Nygren begs for disaster, catastrophe, something all together troublesome.  If this juxtaposition of happy melody and anguished lyric doesn’t entertain, the final pay off line really should.  With an overwrought key change, he resorts to a cliché: he begs on his knees…and just when you think he’s about to say please and reach deeper into the bag of clichés, he asks for philosophy, theology and/or pornography.  Anything…just to avoid singing another happy song!  Melodic rock is rarely known for its curve-balls or dry wit, so this raising of a smile should be applauded.  Also in keeping with the rockier side of SoS’s output, ‘Time To Say Goodbye’ rattles along rather triumphantly, pulling elements from soft rock’s history particularly frivolously as it goes; the result, again, sounding like something from the golden age of AOR.  With choppy guitars and another strong vocal, it instantly impresses but before long it becomes clear that Stefan Mårtenson’s bursts of parpy keyboards are a vital ingredient – his solid approach and insistent chords fill space throughout.  Again, much like ‘Marie’ or ‘Eat Your Heart Out’, the end results are hugely reminiscent of Toto and Survivor, but none the less enjoyable for their familiarity.

Normally, when it comes to AOR albums, one of the ballads will be a classic, and State of Salazar stay true to form. ‘Love of My Life’ is a touch too saccharine…almost worthy of an 80s Eurovision entry, but Nygren’s huge vocal performance saves face, but repeated listens show the album closer ‘End of Time’ to be a gold-standard AOR ballad.   As with a couple of the other tunes, it has a very strong base, but it’s the guitar solo which elevates it to a higher level.  In this case, the performance is impeccable; the soaring lead reaching out in order to pull emotion from each note.  As with most AOR, you’ll have heard other bands perform similar material, but like most of State Of Salazar’s work on this release the end result is first rate.

Easily the finest melodic rock album of 2014, ‘All The Way’ is essential listening. Aside from gaining access to a time machine set for 1986, this is almost as good as it gets.  A selection of top-notch songs, solid arrangements and strong performances throughout: you just couldn’t ask for more.