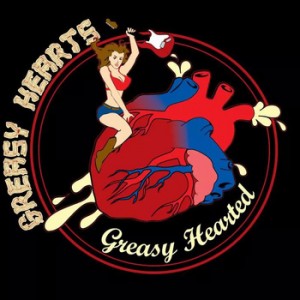 Following the same blueprint as before, the ‘Greasy Hearted’ EP – released just six months later – is raucous and wilfully lo-fi.  The band’s line up may be exactly the same as is the core of their sound, but what’s quickly evident is how much better they sound as a unit – those live shows appear to have given the Hearts a crash course in tightness.  Right from the opening of lead track ‘Nothin New’, their boost in confidence is obvious.  With a slightly louder sound, but similar budget, this track stomps over anything offered by the Greasy Hearts previously.  Gabe Katz’s snare drums rattle the charge, and in a split second the twin guitars of Peter Widerotter and Joe Ferber provide the core of garage rock with a vigour only hinted at before.   With an a punk ‘n’ roll intensity, the track blisters along – in and out in just over a minute and a half – but that’s all that’s needed to know these guys now mean business.  In garage rock/garage punk terms, true to its title it brings nothing new, but it doesn’t need to.  Like a cross between New Bomb Turks and a woefully under-produced recording by Electric Frankenstein, it’s speed and general attitude are far more important than any attempts at bringing a different slant to a much-loved sound.   With more twangy guitars than ever, ‘Boogaloo Baby’ brings far more of the same over a longer duration, allowing Widerotter to stretch his vocal a little while indulging in 50s styled guitar interplay with Ferber – each guitarist taking left and right speaker channels respectively.

Slowing things down, the garage blues approach of ‘Lost Dog’ harks back to earlier material with the twin guitars chugging away, while a gang of distorted vocals add to a fairly cacophonous sound.  The slow drumming provides the backbone of a four-four grind, rarely breaking from its initial pace, the only real flourish coming from occasional guitar squalls between shouty gang vocals. The harmonies are there of course – as evidenced by the last unaccompanied notes – but most of the tunefulness is fairly well hidden.  This slow number is important in that gives the EP a change of pace midway, but it doesn’t show the band at their best. Switching back to the sweaty r’n’r sound of the early tracks, ‘Gimme Some’ utilises some classic elements – ringing guitars that sound like the early works of Chuck Berry replayed by the New York Dolls providing the tune’s real meat.  A twin guitar approach sounds furious here with Widerotter and Farber trading licks and solos throughout, their full-throttle sounds acting as the perfect compliment to a garage punk vocal that’s up there with the subgenre’s best.

Melding upbeat rock with a touch of rockabilly, ‘Lesser Man’ drips with attitude.  The drums shift between meaty beats and wanton crashing and there’s a wobbly, sneering voice that’s supremely confident, but the track belongs to Pat White who finally gets to step above the usual joyous cacophony, bringing an old-school walking bassline that’s pivotal to making this tune stand up…and stand out.  Among the Greasy Hearts more imaginative numbers, this hints towards even greater things in the future. Bringing things to a rousing close, the title cut employs most of the Greasy Hearts’ finest tricks.  There’s a rawness akin to the first EP, but melded with the new confidence the band appear to have in their arrangements, even at a relatively lengthy three minutes nothing here sags or drags.  Katz makes a great noise from behind the kit, while the guitars fill space with tough r’n’r chord structures, while the title is on hand to add a more than reasonable chorus hook.  Like ‘Nothin New’, the result certainly isn’t imaginative by any stretch, but the band are clearly having a great time playing…and if garage rock fits with your listening preferences, it’s likely you’ll have a great time listening.

Those looking for a (relatively) clean and polished Band of Skulls-esque approach to garage sounds might not always appreciate the Greasy Hearts deliberately greasy schtick, but for those who want their sounds straight from the neighbourhood garage, this is the real deal.  The debut EP showed a band with buried potential…but ‘Greasy Hearted’ truly uncovers it, delivering  a fun and frivolous twelve minutes worth of rock ‘n’ roll straight from the gut.