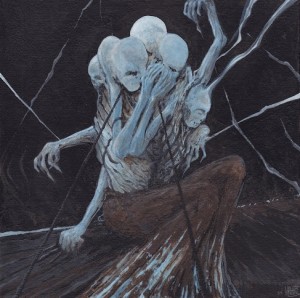 This stylistic choice essentially provides the blueprint of almost everything that fills an uncompromising thirty-five minutes.  For most of the album’s first half (or side one in old money), most the material works around a frighteningly fast drum roll, over which the band’s three vocalists growl themselves horse – often with the voice barking in something near four-four time.  As with everything, there are exceptions: ‘Yester Hara’ teases with a slower intro and a couple of time-signature shifts during an all-too-brief instrumental break, while the second half of ‘Warping the Necrospawn’ (a standout) moves from grindcore into (slightly) more accessible death metal terrain.  With the latter’s inclusion of a couple of slower riffs, this allows more melody (a relative concept) from the guitars, while the drums – although still an unstoppable force – also show more variety within their techniques. None of the lyrics are remotely audible of course; this may something of a potential sticking point, but if you’re happy to  just listen to the sound of four guys hammering away relentlessly – pneumatically, even – then in some ways the lyrics aren’t always important.  There’s no question that such speed and unwavering dedication results in top draw grindcore on this occasion, but it’s still very hard to listen to…and particularly so for any prolonged length of time.

Nestled somewhere around the beginning of what would be side two in a vinyl universe, ‘Fear’ joins ‘Necrospawn’ in bringing something more interesting via a couple of slower sections – more in keeping with top quality death metal – occasionally hint at the band flirting with quasi-melody.  These elements create a thoroughly enjoyable intro in extreme metal terms, but once the vocal kicks in, things quicken pace. With grindcore being Abaddon’s main stock things start to pound furiously once more, though occasionally making room for the intro riff. The slower riffs combined with some tribal drumming (again too brief) result in ‘Fear’ being the album’s most accessible (and best) track.  As things decend into a wall of feedback after a frightening four minutes, ‘Fear’ segues into ‘Impaled On Your Zodiac’ without giving the listener any chance for taking stock of anything they may have just heard.  ‘Zodiac’s intro also stands out as one of the disc’s better moments – the sledgehammer approach taken by the guitar recalls aspects of the earliest UK hardcore punk (Discharge, specifically), but as before, it’s really only seconds before Abaddon Incarnate revert to type and begin to cause potential internal haemorrhaging via something that sounds like a quartet of pneumatic road drills.   No surprises, then,  that the bulk of ‘Prison of Introspection’ isn’t really a reflective or thoughtful piece – more grinding at a thousand miles per hour ensues – but it’s worth noting that Finnerty’s bass sound brings a brilliant bottom end sound intermittently, thus bolstering the band’s musical force very effectively.

The fourteen tracks of severely relentless grinding on their fifth release almost make no pretence at branching out to anyone but the more committed grindcore fan. Abaddon don’t even lighten the mood with lightning fast bursts of noise pulling in at seconds per track as per the Lee Dorrian-fronted Napalm Death – everything grinds at “proper” song length, thus making ‘Pessimist’ incredibly intense but also far more challenging than it even needed to be.  In terms of speed and anger, it is a job well done…though it might have benefitted from a few more interesting riffs scattered among the noise.   While there’s little doubt that Abaddon Incarnate are focused in their art of being among the most extreme bands, this album is a tough listen indeed.