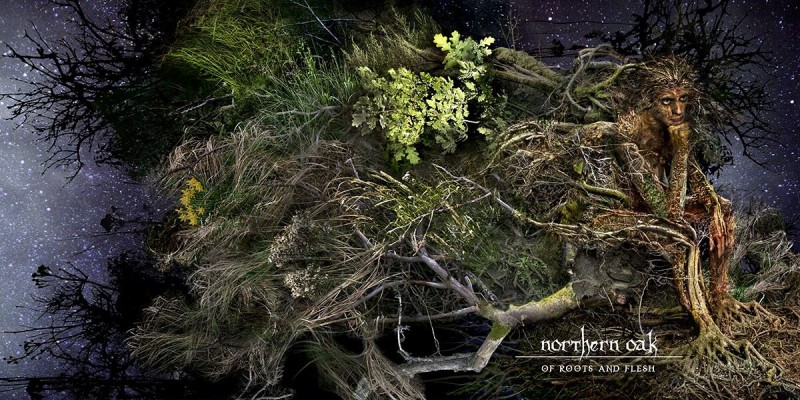 Everything that makes Northern Oak’s combination of influences and talents shine can be heard during the title track – one of the more accessible numbers.  A brief lead guitar motif leading into a tough but simple riff hints at some old style metal influences, but quickly things settle into something far more distinctive.  Folky flutes in the right speaker appear surprisingly high in the mix (especially given the volume of everything else), while gang vocals have an almost medieval or perhaps Gregorian air.  This basis brings an unshakable sound, over which frontman Martin Collins switches between black metal rasps and atmospheric spoken word passages.  The result is aggressive but comes with positive vibes too – the song’s final lyric offers a sage message of advice: ‘Drop your hatred, see how bright life blazes’.  With ‘Gaia’ Northern Oak take those base ingredients and whirl them into something huge. Starting gently with a folky flute melody set atop a dancing bassline, this number catches the ear from the outset. Since the band (briefly) sound more in keeping with neo-progressive rock than the black metal styles that inform the bulk of their music, ‘Gaia’ provides an obvious recommendation for first-time listeners looking for a wide musical scope.  There’s a real bounce to this proggy intro and a lengthy arrangement from these elements, but before long Northern Oak switch to an onslaught thus unleashing more of their black metal demons.  They don’t show all their cards at first, of course, choosing instead to add a soaring lead guitar and a husky voice…but eventually a chugging riff (and more rasping vocals) dominate.  From here on, the greatest source of melody comes from a choir of backing vocals, which add to the general bombast of the arrangement.  At the three minute mark, the band switch gears yet again and th bassline slows to a waltz, allowing flute to take centre stage.  Even when the metallic guitars return, there’s a surprising bouyancy, before everything comes to a close with a hugely melodic lead guitar break showing a very 80s influence.   With ‘Gaia’, Northern Oak take what essentially seems to be four separate musical strands and stitch them together seamlessly – the five minute duration having the epic feel of a giant musical suite.

‘Nerthus’ brings a stronger focus on black metal elements with tough riffing and a scratchy vocal, but even during the harshest musical forays, a lilting flute melody can be heard fighting its way through the dense sound (the flute lines do not always have a great variation in style throughout the album, but even so, they’re absolutely essential).  Bringing back the waltz time signatures, the drums and flute steer the number in a very interesting manner, almost like a sea shanty during its quietest moments.  It’s the more reflective instrumentation during the mid-section that gives this number a lasting appeal, while during those more intense moments, a complex bass part rattles underneath the heavy guitars giving things an extra layer of interest.  Another scorching lead guitar break showcases Chris Mole’s fretboard talents and within just four minutes Northern Oak have manged once again to throw in enough mood changes to keep the prospective listener constantly entertained.  With a thundering drum and buzz-saw guitars, ‘Marston Moor’ brings plenty of intensity in both the guitar and vocal departments, and surprisingly (since it starts quite heavily) it’s a track that appears to get heavier as it progresses.  For the bulk, there’s little difference in techniques compared to the likes of ‘Gaia’ and ‘Nerthus’, but by the time the band reach the climax, their metallic assault is heavier than ever.  The last section of this number features a dual vocal – Cradle of Filth-esque rasping and death metal growling akin to early Opeth – but no matter how far Northern Oak push the black metal, there’s more at stake than merely a wall of sound.  The real star on this particular track is keyboard player Digby Brown whom, playing against fiddle sounds, brings a  blanket drone (not unlike a mellotron), thus adding a cinematic quality akin to 70s art/prog rock.  There are other times when maybe his work should appear a little higher in the end mix, but during this number, his contributions are pivotal. Similarly uncompromising, ‘Bloom’ is constructed primarily around a pneumatic drum part (played expertly by Paul Whibberley) combined with a very clanky piano riff.  The intro has some great string bending (albeit briefly), before the band cut loose. Beyond that, everything centres around crushing bass drums and edgy guitars, creating what’s arguably the album’s deepest black metal cut.  It isn’t quite as complex as its peers, but has plenty to recommend it, particularly to listeners who enjoy extreme metal.  Even at their most extreme, a circular flute riff courtesy of Catie Williams brings a touch of other-worldliness to the fore, proving that even at their most uncompromising, Northern Oak have a keen ear for a melodic hook.

Perhaps best of all, ‘The Gallows Tree’ throws everything into the mix, ensuring every element of the band’s crossover style gets a little time in the spotlight. A synthesized fiddle sitting at the heart of the number recalls the glory days of the aforementioned Skyclad (in particular work from 1994’s ‘Prince of the Poverty Line’), its shrill melodies interspersed with a lilting flute.  The metal aspects are more than covered, of course, with a full compliment of overdriven rhythm guitars chopping away incessantly. They occasionally break from their full-scale thrash-based assault to offer something more melodic, throwing in a few twin leads and a fast jig-themed solo en route.  Hearing the sharp guitar lines in a brief call and response with flute proves most effective in hitting home this band’s strong musical vision.  The vocals push forth with a huge black metal intent as Collins growls into the abyss once more; although large parts of the lyrics are indecipherable, if we view his voice as an instrument it is incredibly powerful; his demon growl is counterbalanced by the sweeter flute – still maintaining a strong position under the heaviness.  Bringing things to a close, all metal riffs subside and the bass leads a few bars more akin to 70s prog: while the flute is obviously reminiscent of Tull and ‘Trespass’-era Genesis, the busy bass hints at the more complex works of Renaissance.  Briefly, these sounds appear to have little relation to the black metal jig preceding them…and yet, somehow Northern Oak ensure this melding of disparate styles works well without jarring. Very well, in fact.

This release is not a complete folk metal onslaught. There are a couple of spoken word pieces used as a segue and a coda, while those looking for a little musical respite should head for ‘Isle of Winds’ –  a lovely three minute interlude, where finger-picked acoustics jostle against a simple rhythm, the bulk of which is supplied by a warm bass.  In terms of structure this tune is among the album’s most simple, but the main melody – supplied by a dreamy flute – is utterly charming.  Of course it’s the polar opposite to the likes of ‘Nerthus’, but it is by no means instrumental filler: in fact, this diversion is vital to Northern Oak’s musical scenario.

There are no weak elements here:  The production values absolutely stomp over all of the band’s previous works; as a result the band sounds great throughout.  The extreme metal passages are hard hitting, yet often with a strong feeling of structure and melody.  While the black metal vocal stylings may be a little off-putting to some, for those who are initially unsure, ‘Of Roots and Flesh’ is certainly an album with which it is worth persevering –  if you can make it past the voice, there’s a wealth of enjoyable material here.  The intense approach to songcraft often results in compelling listening, especially with the way the flutes constantly manage to break through the barrage – and with the defiantly 70s prog moments intermittently lightening the tension, it’s altogether a winning formula.  With a greater confidence, a broader set of musical influences and a production that does their material justice, ‘Of Roots and Flesh’ is a release that outshines any previous Northern Oak recordings.