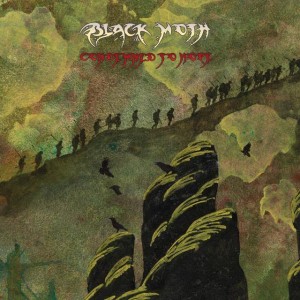 Not rushing to capitalise on early cult success, Black Moth’s second album ‘Condemned to Hope’ was three years in the making.  Choosing the world famous Roger Dean to create the album’s art, the band make a bold statement, since Dean is renowned for his work with Yes, 70s proggers Gentle Giant and Greenslade – none of which, obviously, has much connection with the heaviosity that fuelled the Moth’s previous output.  Fear not though, despite connections with Dean, ‘Condemned to Hope’ doesn’t find our heroes venturing into self-indulgent new-age abandon, although there’s every chance they could have taken the Earthless route and recorded a fifteen minute epic…but again, there’s none of that here.  Wisely, Black Moth take their original blueprint and choose not meddle with it.  It has been tweaked and tightened, as only is natural (unless you’re AC/DC and content to dish up what’s essentially the same album for thirty years) but those who liked ‘The Killing Jar’ will have every reason to love this second outing.

Lead single ‘Room 13’ (released a few weeks earlier) is a number that very much sets the tone for the album.  Following a heavy drum intro, chugging riffs drive the band forward apace, with a heaviness typical of classic Sabbath-infused metal but with an extra sense of groove akin to many a great US stoner outfit.  The downtuned vibes are great, but not as great as Harriet Bevan’s vocal performance: she’s a powerhouse of melody and strength, here drenched in echoing tones giving her voice an other-worldly nature.  The opening groove barely rests for the duration, showing Black Moth’s love of the riff and a world where the riff is all – the band’s furiously meaty sound given a perfect send off by Bad Seeds/Grinderman man Jim Sclavunos occupying the producer’s chair.  As heavy as a very heavy thing (to borrow a useful phrase from Devin Townsend), ‘The Last Maze’ is downtuned to absolute buggery, its slow riff lurching from the speakers, at first every chord seeming to fill several bars.  This is absolutely fabulous doom.  Knowing they’re on to a really good thing, the Moth fill each verse with such impending dread and a slowness rivalled by Type O Negative’s most epic work, before stepping up a gear for a groove-laden chorus and killer guitar break.  You want slow? Heavy? Both are here in abandon, while lyrics concerning coiled serpents squeezing every ounce of life from bodies obviously really help to heighten any tension.  Taking the darkest moments of this number and slowing down even more ‘The Undead King of Rock n Roll’ takes the Black Moth sound to its most extreme in places, utilising a riff that could challenge the very finest doom merchants for their crown.  Nothing ever feels leaden, however, thanks to a brilliant mix and great performances – particularly Bevan, once again, who curls her voice around every word in a threatening manner that commands attention.

Showing a different side to the band, ‘Slumber With the Worm’ blends typically doomy soundscapes with an oddly discordant guitar break and quieter verses driven by muted chords – those verses far closer to mid-90s Nick Cave and the Bad Seeds than Kyuss (thus showing more than ever while Sclavunos is the perfect choice of studio hand for this band).  Surprisingly, nobody sounds uneasy tacking this sparser soundscape – in fact, quite the opposite.  The vocals croon and soar, the drums rattle incessantly and those aforementioned twanging guitars bring a cinematic scope to the whole piece – a job well done from all concerned.  In terms of pace, ‘White Lies’ is also a little different, setting out to really crank the gears.  The heavy riffing guitars bring plenty of power, but it’s the rhythm section that are the real stars here. Dave Vachon’s bottom end bass work rattles incessantly – sounding great when bought to the fore during the verses – while Dom McCready smashes hell out of his snares.  A fast paced romp through a metallic haze that sounds tailor made for live performance, this number is a guaranteed crowd-pleaser.

Vachon makes his presence strongly felt once again during the slow, lurching ‘Stinkhorn’ – a number that appears to be a dark look at growth, nature and nurture – throwing out long distorted notes to compliment the churning chords of the two-guitar assault.  The guitarists – Nico Carew and Jim Swainston put forth a hugely forceful barrage of sound throughout, something akin to Tony Iommi circa 1972, only embellished with a couple of twin lead flurries for good measure.  It doesn’t break new ground for the Moth, but in terms of sheer metallic entertainment, it’s one of the album’s standouts. ‘Tumbleweave’ is another number that ranks among the album’s most impressive.  The doomy edge is flattened by a few muted chords during the verses allowing the voice to take centre stage, while the over-riding sense of groove and sassiness is never compromised.  A huge riff balances the quietest moments with something much heavier, parts of which are clearly a homage to the work of Tom Morello.   A lead guitar wails obstinately – and the album’s amazing mix means the more flamboyant moments never get crushed by the monolithic riffs.  Factor in a barrage of fairly abstract lyrics – burger queen, blue WKD, pepperoni breath and the titular tumbleweave – and it quickly finds its place as one of the band’s finest offerings.

Rest assured, any fears you may have had about Black Moth’s second album being somehow inferior to their previous work will be blown away with just one spin of ‘Condemned to Hope’.   With enough heaviness to please the metal fan, more than enough groove to rank alongside Fu Manchu and The Atomic Bitchwax, yet remaining just accessible enough to warrant a big commercial breakthrough, this is close to perfection.  In approximately forty minutes, Black Moth delivers a powerful musical statement that leaves their peers and all potential hopefuls in the dust.