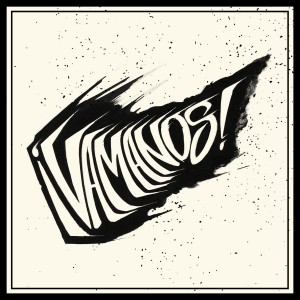 As blusterous as Jon Spencer’s Blues Explosion yet accessible in their slide guitar fixated approach, The Dead Exs were just one of many blues duos to take the stage in the wake of The White Stripes’ popularity. Their debut release ‘Ressurection’ was raw yet focused…possessing power and groove, in short, everything garage blues should be.   If The Dead Exs channelled the power and charm of the Blues Explosion’s classic work, then King Pizza signings ¡Vamanos! are almost the ugly Pussy Galore by default – their brand of garage blues making all but the very rawest noisemakers sound like major label puppets.

This is not a criticism.  For fans of the garage blues genre, this band’s debut EP presents speaker-blowing, exhilarating thrills.   Sounds so raw, the band sound as if they are about to explode. In just over two minutes ‘Bleeding Blues’ sets out the duo’s intentions firmly.  Frontman Alex Knoche screams and yelps “baby, baby please” repetitively and forcefully in the manner of a man possessed, his voice wobbling throughout, while Bower smashes his simple drum set up thus creating a giant cacophony.  Linking these two extremes, Knoche’s guitar work is given the task of laying down some semblance of a tune, churning out fast blues riffs with a punky intensity.  Like label mates Greasy Hearts on speed, it’s hard not to fall for its ugly garage punk charms.   Slightly more tuneful, taking things down to a mid-paced punch, ‘Bay Ridge Buyin’ Blues’ delivers a meaty riff, but the riff and vocals are so distorted you may just think your speakers are in danger of being damaged!  Again, the intensity of the screaming vocals propels everything forward, but if you can make it past those, there are other key moments of ¡Vamanos! intensity, including an incredibly fast, near-tuneless guitar solo, reinforcing the feeling these performances could come off the rails at any second.

Stoking the bluesy fire, the slow pounding of ‘Shiver and Shake’ allows the duo’s moodier elements to take hold.  There are twisted distorted guitar chords pitched against a booming drum hammering out a bluesy doom. Typically, ¡Vamanos! don’t seem to keen for these blues elements to represent anything but distorted despair – all vocals are drenched in so much fuzz it makes them near undecipherable, the hard chords are treated with a similar confrontational echo…and the lead guitar break is so loud, it genuinely threatening.   The strongest of the self-penned tunes, ‘Low Speed Car Chase’ has a similarly wilfully raw approach as the preceding numbers, but this particularly raucous recording, ¡Vamanos! really come alive.  Despite being prone to sledgehammer musical tactics, Knoche rattles his strings in more refined way here – at least as much as is required  to ensure the opening guitar salvo is instantly recognisable whenever it recurs throughout the rest of the track.  It’s got groove and sass a-plenty…and yes, it’s also got a truckload of reverb, just in case you’ve not quite been pummelled enough.  That riff sounds brilliant when placed against a bass drum kick, and the thick garage rock chords that follow are the perfect compliment to the barrage of cymbals that ensues.  Garage rock 101: nothing flashy, just speed and anger rules but frankly, if garage rock is your bag and you can take the intensity, you’ll love this.

To compliment their own work, the duo tackle the gritty blues classic ‘Death Letter’ (originally recorded by Son House in 1965, remodelled from an earlier number).  The drums careen and crash, (understandably in a far more carefree and aggressive manner than Meg White managed on the popular White Stripes recording of 2000), while most of the guitars happily straddle themselves between an equal mix of wanton thrashiness and choppy blues motifs, all dressed up in typically ugly style.  Sure, ¡Vamanos! could have had this done and dusted in as short a time as their own material, but you can really sense the joy they have jamming this one out for almost seven minutes, particularly during the lengthy instrumental coda, chock-full of stops and fake endings.    It’s ferocious, hard and bluesy, a little punky…and incredibly fierce.

Making The Black Keys sound like a soppy pop band and The White Stripes seem corporate-friendly and manufactured, the work of ¡Vamanos! has absolutely no subtlety whatsoever.  This release goes for the throat in every sense, scowling errantly at anyone who dares cross its path.  An essential listen for garage blues aficionados.