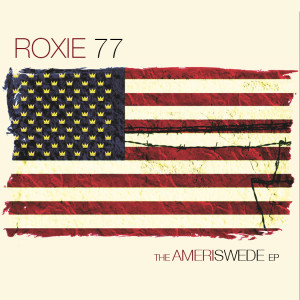 ‘Idiots & Idols’ begins the release with an incredibly strong offering.  With a barrage of muted strings as opening sting – the sound of a guitar primed and ready – the band catch your attention before launching into a glammed up hard rocker that has hints of many of Roxie’s earlier works.  The hefty combo of chunky rhythm guitar and a glammy vocal (bringing more than a touch of Dad’s Porno Mag) bodes well from the get go, and then Roxie hits out with a chorus that’s so classic it could have dated from those carefree Candy days.  “Love songs for idiots and idols” he teases, suggesting that everything’s disposable…delivering his giant earworm over disposible glam-fuelled riffs with his tongue firmly in cheek.  With influences from Cheap Trick, Enuff Z’Nuff and an in-tune New York Dolls abound, ‘The Solution’ rattles along in a similar fashion, but has the upper hand via more of a  pop edge and melodious guitar break.  If you ever loved Roxie 77 or DPM before, this is instantly lovable.  If you’ve never had the pleasure, it’s time to dive in and enjoy.  It doesn’t get much better than this.

After such a strong pair of songs, you may find yourselves thinking RR had peaked early…but you’d be wrong!  ‘Downtown’ combines a rattling riff with the kind of instant sugar hit Chip Z’Nuff probably wishes he could still deliver.  The whole band sound in good form throughout – multitracked guitars bring a shimmering lightness somewhere beneath the punchy riffs, phasers adding to the power pop vibes when and where necessary.  Meanwhile, signs of a busy bass line show a touch of extra complexity.  With a heavy snare and more simplistic approach all round, ‘Silent Confrontation’ appears slightly weaker in terms of arrangement, but another first-rate chorus lifts things considerably.  There’s nothing – barring the occasional vocal filter – you won’t have encountered already by this point on ‘Ameriswede’, but the mix of pop shine and old-school hard rock coupled with Roxie’s gift of the hook ensures this still shines brightly without feeling like mere recycling.

After four absolutely superb power pop hits, Roxie then chooses to finish the release in a more sedate style.  ‘Anna’ is a soft, semi-acoustic ditty which hints at country before leaning more towards light 70s pop, something reinforced by an unexpected sax break.  Simple chord strums combine with well-rounded harmonies and a ragged Donnie Vie-esque lead vocal to great effect.  It doesn’t have the instant appeal of the rockier tunes, but works well enough as a mood piece.  A little tougher, ‘Simpleton Girl’ continues on a reflective theme both lyrically and musically with a strong nod to the kind of pop delivered by The Raspberries and Robin Zander.   A second guitar churning out a hard ringing sound prevents anything from ever becoming too saccharine while carefree backing vocals and another instant chorus ensure it’s an all-round enjoyable pastiche to yesteryear’s AM radio hits.

So, we have six strong songs here, but there’s more!  In addition to those six tracks mixed in the US by Hendiksen, there’s also an alternate version of the entire release mixed in Sweden by Jon Bordon (hence the title ‘Ameriswede’).    It’s not necessarily a complete overhaul, but there are a few notable differences.  During ‘Idiots & Idols’ in particular, an effort has been made the drums a little beefier, while the vocals on the chorus are treated with more reverb, generally making things sound a touch more lively.  The harder sound is evident on the other “electric” tracks, too – such as removing the tinkly percussion and synths from the intro of ‘Downtown’ – effectively giving the already great material even more urgency than it already had.  With regard to those softer numbers, the electric rhythm guitar parts appear to have been pushed much farther forward in the mix.  This has the effect of making both numbers sound more like Enuff Z’Nuff than 70s pop – which is no bad thing, obviously – but for the record, both tunes are better than pretty much anything Chip ‘n’ Donnie have released since the turn of the millennium.  The Swedish mix makes an already enjoyable selection of tunes sound even more exciting.  Of course, whichever mix works “better” will be a personal taste issue, but it’s so good to have that choice.

‘Ameriswede’ would have been a great EP, but having the alternate versions on hand to bring everything up to album length is a real bonus.  Issued on vinyl (with a bonus CD), this is without doubt one of Roxie’s finest works –  a masterclass in trashy/glammy hard rock. Don’t miss it!