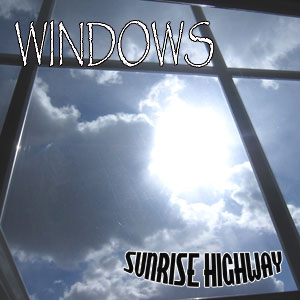 Sunrise Highway’s self-titled album (independently released in 2010) struck a chord with a few power pop fans.  Although not a patch on the sole album from the sadly missed Oranjuly, it had a homespun appeal and some of the tunes (‘Life on Mars’, especially) showed great promise.  Four years on, their ‘Windows’ full length was picked up for wider distribution by Kool Kat Musik (home of DIY singer-songwriter Stephen Lawrenson, Cleaners From Venus etc).  For those expecting more of the lighter tones of that earlier record – particularly the jauntier Brian Wilson/Jellyfish inspired piano tunes – ‘Windows’ may come as a disappointment.

Sunrise Highway are not really sunny as much as hazy this time around.  Any comparisons with a DIY Jellyfish can be forgotten, as they seem far more pre-occupied with channelling parts of the likes of late 80s indie bands while including a few of the less interesting elements of Teenage Fanclub for good measure. Huge chunks of this long player – far, far too long at almost an hour – are over-reliant on mid-paced, woozy numbers – songs that seem like interchangeable dirges at worst and ignorable lift music at best.  When faced with several of these one after the other, this release just feels maudlin and rather boring after a while – not to mention extremely samey.

It’s worrying that lots of the album’s numbers seem content to follow a blueprint of fuzz bass and clanging rhythms and then assume that would be enough to make things work.  Yes, the inclusion of the twelve-string guitar is welcome from time to time, but it has none of Roger McGuinn’s lightness of touch, or even the sense of loving care bought by Teenage Fanclub and their ilk, even at their most ragged and the song writing is often poor.  The slow approach of the title cut in particular doesn’t grab the attention straight away. Its aims for something summery are partially successful – but only provided you concentrate on the piano and bass parts lurking somewhere beneath the simplistic chiming sounds.  Rolling along at a slow pace, the band’s stronger elements are present: there are a few ringing guitars and a gentle sense of laziness. The vocal – though far from perfect – suits the half-asleep arrangement, while the bass underpins a hazy blanket of sound with something more pointed.  At first this seems to be an unlikely choice of opener, especially given it’s lack of directness, but it soon becomes clear why the band have used it to make a first impression…It’s a strong contender for being the best track here.

Attempting to rock harder, ‘Breathe’ employs a fuzz bass and a riff that sounds like it could slip into Clapton’s 1970 MOR tune ‘Let It Rain’ at any given moment.  Attempts at harmonies are nasal and not always appealing, while the bulk of the tune is marred by a compressed sound.  As with most of Sunrise Highway’s material, there’s nothing present to give things that necessary lift. This tune in particular sounds like a Ben Kweller cast-off; the big differences being that Kweller would have inserted a quirky lyric and had it all done and dusted in half the time.  There’s a two and a half minute song waiting to escape from this bloated five and a half minute borefest.  ‘Call Waiting’ works around a middling riff that’s closer to 90s indie than the usual power pop stock, but despite another solid bass part, it never seems to raise above its status as a Teenage Fanclub reject.  A similar stance is taken by ‘For Members Only’ and ‘Out of Our Heads’ – both middling, not very interesting guitar-driven numbers that are sorely missing any necessary hooks: it’s all reverb and drowsy singing…even the band sound bored by their own music. ‘Giving It All Away’, meanwhile, taps into some distorted pop but, again, very little comes across with any real pizzazz. A naturalistic vocal appears wholly unconfident and a bad keyboard solo sounds like Greg Hawkes wearing mittens. By the song’s end – another that’s potentially two choruses too long – the lazy vocal really starts to irritate with its general drippiness.

With a solid bassline and a few interesting echoes and quirks, ‘Cinammon Eyes’ could sound like a retro classic in the hands of a superbly talented band like Farrah, but given Sunshine Highway’s rather pedestrian musical abilities, it runs out of steam frighteningly fast. A weak drum sound and particularly off-key harmony kill any chance of this being enjoyed by a more discerning audience.   At this point, you have to wonder what this band are trying to achieve – if they really don’t care enough to write anything sharp or (more importantly) anything interesting, frankly, why should anyone bother listening?!   ‘She’s Got Me Buzzin’ leans towards fuzz bass (quelle surprise!) and slightly discordant guitar work that shows a love for Jon Auer and The Posies (though with little to no understanding of what makes their best tunes so appealing).  This starts well, but ultimately – like nearly all of these songs – wanders into casual indifference after about a minute.

It’s only with the closing number ‘Sleeping City’ with its lolloping rhythms and electric piano that Sunrise Highway come close to the kind of power pop hinted at by their prior work.  Although a wayward guitar solo threatens to derail everything midway, the simple four-four beats and happy-go-lucky attitude sounds like an Oranjuly demo-recorded homage to Andrew Gold.   The vocals aren’t necessarily any more focused, but a good tune can go a long way…it’s a shame most people won’t necessarily make it this far.

‘Windows’ occasionally has the roots of what should be a few enjoyable songs, but the band seem incapable of arranging those into anything interesting – either they’re lacking in pace, or worse still (as in the case of ‘Breathe’), they take a half-reasonable idea and drag it out for far too long.    This general approach feels rather arduous when (unless you’re Alex Chilton or Chris Bell in the midst of a breakdown) quirky and uplifting would have been far preferable.   The result is a release that’s just never going to be sparky enough for most power pop fans, but not sharp enough for those seeking out retro guitar driven pop/rock either.  It’s the worst kind of record in that not only is it just not very good…but it doesn’t have enough balls to suggest that it failed while trying to attempt anything special.  File under forgettable.