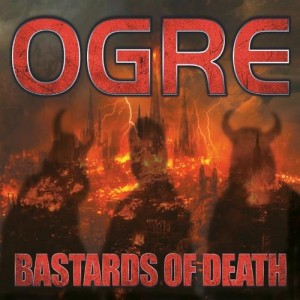 One of Ireland’s original death metal bands, Ogre released three albums in the early nineties before disappearing.  After a twenty year holiday, the trio return with the joyously titled ‘Bastards of Death’. On the surface, Ogre sound like any number of extreme metal bands that you care to mention since most of their material throttles along at breakneck speed while the chosen vocalist sounds like he’s channelling the voices of thousand demons while suffering from a throat defect.  If that description sounds either disrespectful or plain silly, then fear not: Ogre take the confines of the death metal genre and have fun with their sound from time to time – and since the band aren’t always taking things entirely seriously, there’s little reason why their audience should either.

Despite the general silliness lurking beneath the whole package – the members dress as hooded monks wearing giant horns while calling themselves Forthron The Evil, Jean De Baptist and Chewed Giblet – from a deathcore perspective, you’ll find some pretty uncompromising sounds within.  Between various samples – TV stations, sirens, torture scenarios, news reports, all suggesting this may be a concept album of sorts – there are twelve enormous slabs of metal alternating between a classic death metal approach and extended grindcore workouts.  All aim for maximum intensity, but a few moments allow prospective listeners time to take stock and think about Ogre’s ferocious noise.

The band amuse and tease with song titles like ‘Robot Bastard’ – a grinding and thrashing affair with brief dalliances with an almost clean vocal – and ‘Murdered By The Millions’, a tune that sounds like an early Napalm Death staple albeit stretched to a proper song length.   Elsewhere, they offer delights such as ‘Mangled Bodies of the Children’ – death metal delivered at heavy doom/Crowbar pace; ‘Brain Driller’ – a standard death metal pneumatic pounder and ‘Pig Driller’ – much more of the same.  Everything is well played by all concerned, with Baptiste’s manic drumming the best part of most numbers, but as amusing as some of this is possibly meant to be, any humour within its blackness is (mostly) lost without the aid of a trusty lyric sheet.

The album features three obvious highlights.  A number with split loyalties, the title track sees Ogre pounding away at lightning speed for the first half, before settling down to a slow grind for the second, eventually resulting in something that pulls influences from Death, Obituary and other genre pioneers.    Somewhere along this particular journey is a relatively lengthy guitar break that doesn’t even pretend to flirt with melody; instead Forthron throws out a succession of deformed and off-key notes until it’s time for his growling to take centre-stage once again.  Meanwhile, for something resembling light relief – for even the most intense albums need a touch of reflection – Vadge of the Ogre’ starts out as a tune that sounds like Eyehategod joined with an ugly vocal, before adding a flourish of something more interesting.  Its last two minutes hammers out more of its measured doom riff, but replaces the harsh voice with a sample of Gregorian chanting.  After so much grindcore/death intensity, this homage to a more classic doom sound is incredibly welcome.  The droning approach, complete with choir vocals once again, is revisited during ‘Insane Decapitation By the Supreme Corpse Disposal Machine’, only this time, the choirs are joined in tandem by Forthron’s best growl, occasionally offering up decipherable words within his possessed throat.  Slow and threatening, it is a rather fitting way to end this journey into the world of three twisted souls.

‘Bastards of Death’ is an unlikely return from a cult band. There’s a small chance that death metal purists will think the overblown nature of the whole album and moments of possible humour within somehow cheapen the mangled offerings from these Irish anger-merchants.  That said, since the subgenre’s more devoted and “serious” acts have previously dabbled with burning inverted crucifixes into their own foreheads [Deicide], shown depictions of rotting corpses performing sexual acts [Cannibal Corpse] and delivered songs with names like ‘Necrocannibalistic Vomitorium’ [Autopsy], exactly how seriously any death metal is meant to be taken seems somewhat of a moot point.  As with everything, though, there will be people out there happy to go along for the ride.