Before both well-known bands appeared, a particularly sparse gathering of about twenty five people witnessed a brilliantly unsubtle performance from Menshevik, a ten-ton hammer of hardcore who clearly put in the hard yards no matter how small their attendant crowd.  Throughout their twenty minutes, they thrash out generic – although excellently performed – hardcore (akin to Bridges Left Burning and Sick of It All); frontman Rob, meanwhile, knows no bounds throwing himself over the front barrier repeatedly in order to stomp through the venue and scream into the faces of those watching.  Seriously – catch these guys if you get the opportunity.

Kicking off their all-too-short set with a cover of the theme from ‘Whatever Happened To The Likely Lads’, Snuff announce their arrival with irreverence (“Let’s have a big aah for Duncan. He’s not well – he shat himself before coming on!”).  Despite this revelation, the always enjoyable troupe appear in great spirits, whether playing old favourites like ‘Fuck Off!’ or ‘Soul Limbo’ or newer material such as ‘Mumbo Jumbo’ or ‘In The Stocks’.  The general fooling (talking bollocks for the sake of it, or mocking keysman Lee Murphy for being too posh for Snuff) doesn’t always greet the indifferent crowd well; hecklers bemoaning the joyously ramshackle band to “stop wasting time” are retorted with a flippant “no!”, in typical style.  A voyages into thrash metal via a new song which Lee Batsford insists is called ‘Children of the Grave’ is greeted with a lukewarm response [the setlist suggests this wasn’t called that at all; it may not have even been new], and only the crass ‘Arsehole’ at the end of the set lifts most  people’s mood.   Despite most of the audience’s mood, it’s clearly a great performance. Ah well, Monday night crowds are hard to please – and this one obviously fairly devoid of humour whilst patiently waiting the arrival of ALL and their jazz-inflected punk chops. 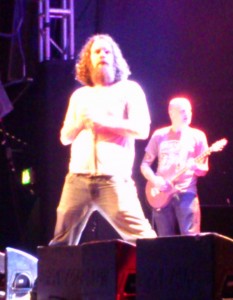 It seems that once the time comes, some do not especially want jazz-inflected punk chops either.  The house lights dim, yet nobody seems to notice. The legendary Bill Stevenson assumes his position behind the drum kit, with Karl Alvarez (b) and Stephen Egerton (g) at stage left and right respectively.  There is no real feeling of excitement in the audience; the band greeted with a polite applause and small cheer upon their taking their place out front.  Maybe this has something to do with having seen Egerton appearing on stage to tune his own guitar only a few minutes beforehand, maybe everyone has the Monday night malaise – either way, there’s none of the roar usually associated with the start of a performance.  …And with a minimalist greeting of “Hey, we’re ALL”, the trio tear into a piece of jazz-punk showing off the talents of the rhythm section excellently.

Joining them on stage, vocalist Chad Price – now looking somewhat like The Dude from ‘The Big Lebowski’ – takes the mic and the band kick their main set off with should-be crowd pleaser ‘Fairweather Friend’.  For the next fifty minutes, the band never stop for more than a few seconds between songs and their blend of punk, jazz and occasional power pop begins to blur.  Only the excellent ‘Miranda’, ‘Bubblegum’, and ‘The World’s On Heroin’ make a bigger impact than the flurry of short numbers that ensue – the latter gaining the most positive response from the crowd due to its inclusion on one of the Epitaph record label samplers.  About halfway through, the biggest problem with the ALL live experience (certainly on this occasion) becomes apparent: the band’s refusal to interact with the audience inevitably ends up feeling like a case of “us and them”.  While professional to a fault and totally into their art (Alvarez’s approach to the bass is astounding throughout), ALL may as well have been cranking through the same set in their rehearsal space – the audience are almost an irrelevance, rarely giving back more than a restrained applause for the most part (an encore including the brilliant ‘Million Bucks’ marking one of the only exceptions).   There’s something dispiriting about seeing a band so musically gifted and yet absolutely lacking in presence.  ALL gave their musical ALL as only they can, but even so, a great live set needs the extra “something” – and it’s something lacking here.

Love them or hate them, there is no question that yet again – as they did when supporting the self-destructive NOFX and many others – Snuff provided this gig’s most enjoyable set.  Musical prowess is great and all, but the world (and the world of small-ish punk gigs, especially) needs bands that convey a sense of camaraderie: Snuff, while not as tight as many, never fail in that respect.  Given the choice between seeing a band who are clearly enjoying every moment (save for perhaps Dunc with an unpredictable bowel) and a band who are technically perfect, the former is a clear winner.

None of this takes anything away from ALL’s recorded output of course, and listening to ‘Mass Nerder’, ‘Breaking Things’ and ‘Percolater’ on the morning after the show fills an invigorating ninety minutes.  It’s a shame that more of that immediacy wasn’t channelled into a blistering live performance.