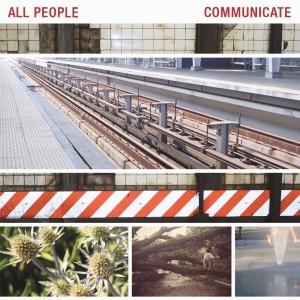 Released via Asian Man Records in conjunction with Community Records (sometime home of Best of the Worst), this eight track disc from Louisina’s All People is a release which never settles. While there are plenty of guitar driven moments and a punky energy within the material, ‘Communicate’ is a release recommended more for those listeners who enjoy a dose of reggae with their attitude.  Although Dub War and The Clash would be the most obvious bands to namedrop, this four piece band have much more to offer than just recycled inspiration and although it would be easy (and lazy) to label them as just another ska/punk band, ‘Communicate’ features arrangements that have so much more to offer than your average skacore merchants.

The band introduces their melting pot of sounds via the appropriately named ‘Introduction’, a short piece led by a fat bass line, underpinned by almost tribal drums and calypso percussive flair.  Topping this very Caribbean atmosphere, a horn section parps out a melodic tune; a tune that is partly reminiscent of the largely ignored solo recordings made by Rico Rodriguez for the 2-Tone label in 1978.  Within less than a minute, All People throw together a heady mix of reggae and ska influences, instantly letting the listener know that this band are potentially very mean players.  A brief spoken vocal leaves us with an important message: “It is the very act of struggling against the resistance within our minds that ultimately results in our strength”.  …And with that, the band change gear, launching into ‘Sometimes’, a reggae influenced punk tune, where hard and rhythmic guitars clash against a dancing bass.  Of most importance, however, is the interplay between the guitars and organ; the keyboards here adding an old school Jerry Dammers inspired edginess, especially once the tune hits the mid-section breakdown and All People shift more from modern punkiness to old fashioned reggae values.  Also capturing the band in a full on mood, ‘Fleeting’ features some full-throttle thrills, in terms of intricate playing and inventiveness, it’s definitely the EP’s least interesting tune.  The bulk of the two minutes drives headlong into something nearing skate punk territory courtesy of some thrashy guitar , with Ryan Leavelle’s vocal making things appear ever edgier. It’s well played, for sure, but not too far removed from so many other bands out there – it’s only the presence of organ which leaves a lasting impression.  In the hands of other bands, this track may fare better of course, it’s just that the rest of this EPs material is so, so strong.

A spoken word piece, ‘Untitled’ finds a message of self-questioning wordiness placed against a minimalist electric piano.  It’s deep and meaningful, but also completely unexpected at the EPs midpoint.  As If they understand things could be in danger of being derailed by this thoughtful interlude (the likes of which would often be chosen as an opening or closing statement), All People come back with all guns blazing for ‘Forever Dub’, which does exactly what it says on the tin.  Echoing guitars and organ pepper sounds across a huge bass loop and the band prove they’ve got huge chops when it comes to bottom end.  Greg Rodrigue’s approach to the bass is very measured throughout, but his choice of riff is stellar.  After a couple of minutes of such hefty reggae, it is guaranteed you’ll wish this could go on for far longer.

‘An Impression’ is All People’s most impressive offering, in that it absolutely writes off any (by now surely fading) thoughts of just them being just another ska-punk outfit.  Following two minutes of tribal style drumming (pierced with the clang of a cymbal), the band break into a slow and menacing piece of reggae worthy of UK legends Steel Pulse.  Rodrigue shows, once again, he is a master of his instrument and Leavelle’s edgy vocal style fits the pointed music excellently.  The real star on this tune, however, is Daniel Ray; in addition to laying down some typical reggae-influenced organ patches, he launches into a semi-tuneful trombone solo lending a sinister edge.  With so many layers, it’s hard not to imagine this appealing to so many punk/2 tone fans at some point.

With just seven tracks (plus intro), ‘Communicate’ is a short but essential release showing a band keen to break down musical barriers.  Although The Clash remains the most obvious practitioners of such a style, few bands have made a veritable melting pot of sounds and influences sound so vital.