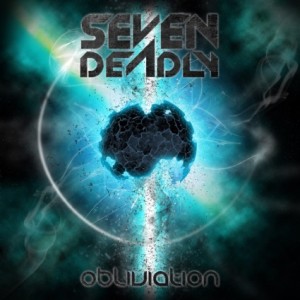 ‘Play The Game’ kicks off this twelve track offering with a circular riff, crossing boundries between groove metal and industrial themes.   As his opening statement, vocalist Archie Wilson wades in with an impressively unsubtle ‘Fuck you!’, and Seven Deadly are off and running.  While that guitar riff is one of the release’s most basic, the groove laid down is certainly effective enough, peppered with a few electronic effects and – perhaps most importantly of all – a great compliment of bass drums from Rob Hicks.  With a chorus that barely extends beyond its one line, this is by far ‘Obliviation’s weakest track in terms of song writing; musically, however, it provides the basis from which the rest of the album grows – with each passing track, getting better…and for those familiar with the preceding EP, you’ll know very much what to expect here.

‘The Wrath’ sounds at first like it might be in contrast at first, dishing up a very old fashioned riff – the kind which would be ideal for Brit metallers Neuronspoiler – but quickly enough, Seven Deadly revert to type, settling for a metalcore assault that showcases a great drumming technique from Mr. Hicks.  The influence from the likes of Trivium during this number is overwhelming – the melding of old-school metal sounds and more modern flourishes is akin to material from that band’s ‘In Waves’ release of 2012.  At this point, with all of Seven Deadly’s members showing themselves to be every bit as good as a world-conquering metal band (and with brilliant production values to match), you may well find yourselves asking why Seven Deadly have no label support for this release… But then again, since they’re able to release a disc of this calibre independently, maybe they just don’t need a label wading in and taking a huge cut…

‘Remain at Peace’ brings a main riff that’s, again, simpler than most (strong recalling works of Black Stone Cherry), but digging deeper, there’s a few more complex elements which carry the number to bigger heights.  These range from a few ear-catching guitar effects, occasional use of drum pedal triggers and some particularly meaty bass work from Murillo Rassi, occasionally rearing his head with a killer rattling sound, thus adding further to the bottom end groove.   Like ‘The Wrath’, this is a classic piece of twenty-first century metal, which no amount of words make up for actually taking time out to hear first-hand. After a dark and militaristic intro, ‘Time Ghost’ brings a severe slab of a riff under which a few droning sounds add extra texture.  The vocals opening the number are among the album’s least tuneful in places, concentrating on a throaty rasp, but in terms of stylistic choice it never feels misplaced.  Once the band kick in fully, it’s all systems go for a track that blends metalcore aesthetics with some old-school thrash intent, destroying everything in its path. Managing to be a little more melodic in places, the title cut chimes in with a punchy groove (topped by a choir of voices shouting in unison), before the mix of downtuned riffery drives everything ever forward.  The verses are solid (very much a cross between Pantera and ‘End of Heartache’ era Killswitch Engage), before it’s metalcore elements are highlighted further by the presence of multi-tracked vocals on a hugely melodic chorus.  Every moment of this number has been meticulously thought out and despite being constructed of three distinctly different musical themes, doesn’t ever sound like a cut-and-paste affair.  Even the arrival of a very old school guitar break to finish (twin lead with bags of melody) doesn’t sound as if it was tacked on. Perhaps the most accessible tune, ‘Remember’ focuses far more on the use of harmonies, with their trademark chorus sound bleeding through into most of the verse.  Wilson is occasionally tempted to through in a growl or two, but there’s a much smoother sound throughout.  Don’t be fooled into thinking it has no edge, however, as it has plenty –  Harj Virdee and Dave Irving’s guitars entertain throughout with downtuned riffing – but it’s when tapping into twin lead work both musicians sound their most thrilling.

The album is bolstered by reprising three numbers from their debut EP in newly recorded versions.  The mighty ‘From This Darkness’ (one of the band’s strongest numbers) and ‘The Allegiance’ sit excellently – and confidently – among the newer tracks, while ‘Blood On Your Hands’ also makes a much welcome return; with its Ill Nino inspired sense of harmonies and crushing rhythm, this number remains a great example of the Seven Deadly sound.

Following an indifferent opening track, Seven Deadly’s gift for mixing metalcore roots with a few eighties-inspired twists is (mostly) spot on.  ‘Obliviation’ unfolds into a brilliant metal release that delivers heaviness with a great (and all-important) sense of the melodic, creating a welcome punch for most listeners of a heavier persuasion.