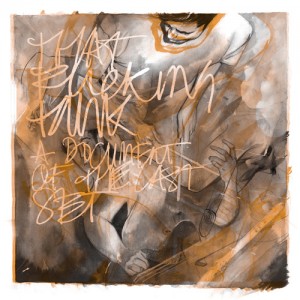 ‘A Document of the Last Set’ marks ten years of underground noise for the Leeds-based duo That Fucking Tank.  To celebrate the milestone anniversary, Andy Abbott (guitars) and James Islip (drums) hammer through the tunes which comprise their 2013 live set in an unrelenting manner – the results straddle the fine line between ugly, intense, genius and surprisingly tight.  Those who own the studio records will no doubt know these tunes well and need no encouragement to buy this…but for everyone else, here’s a handy overview of a few highlights.

Almost without stopping, the duo tackle nine excellent tunes here, the best of which, ‘Acid Jam’ really shows up Islip’s gift for attacking a simple rhythm and making it sound like far more is going on – the combination of bass drum and hi-hat taking the bulk of the beat is just fantastic.  The arrival of distorted guitars (amped simultaneously through guitar and bass amplification) shows the two-man groove machine in full flow.  The intermittent bottom end is so fat, you can hear the lower strings rattling (is this really not played with a bass?!).  By the midpoint, TFT haven’t really expanded too much on their original riffs, but its repetitive nature is all that’s needed to reel in the listener.  Raw it may be, but there’s an oddly danceable quality lurking beneath almost every bar.

In a similar mood, Islip rattles another repetitive drum line at the back of ‘Mr Blood’, his snare sounding like an echoed biscuit tin, while Abbott’s distorted guitar sounds like the work of three musicians.  Their almost merciless groove never becomes tiresome despite never really changing, Aside from brief lapses into less controlled noise, its mechanical beat almost echoes that of Neu’s Klaus Dinger, albeit played in a more threatening alt/post-rock manner by ex-Mutiny Mutiny drummer Marc Mazique. Elsewhere, ‘Wonderful World of’ presents a much simpler musical assault with just under three minutes of chunky chords hammered out with a reasonable amount of distortion.  While nowhere near as complex as the bulk of material, the blend of fuzzy rawk and basic tub-thumping hits TFT’s raw musical manifesto home in an easily digestible chunk.

In case you were wondering if TFT’s jam band/noise experiment style  is all about attitude and without humour, look no further than the short ‘Bruce Springstonehenge’ – the discordant blend of doom rock a la Bardo Pond and a particularly ugly garage-blues band thinly disguises tendencies to break into parts of ‘Dancing In The Dark’ without any subtlety.  If that doesn’t raise a smile along the way, nothing will.  Showcasing TFT’s scattershot approach even farther, a lengthy rendition of ‘Dave Grolsch’ kind of brings all of the duo’s best aspects together in one hit.  From discordant jazz beginnings (like Minutemen attempting something on the scale of Greg Ginn’s Gone), TFT eventually tackle a piece of epic blues-rock with uncompromising results, the high speed rattle of distorted guitar and crashy cymbals at the three minute mark closer resembling the acid blues of the late 60s than their own ‘Acid Jam’.  If this doesn’t convince you of TFT’s surprising appeal, absolutely nothing ever will.

While it may seem that such a release would only be of interest to existing TFT fans, the selection of tunes works as an excellent primer for the uninitiated.  The recordings may be somewhat rawer than their previous equivalents, but that’s certainly no bad thing…  That Fucking Tank are THE FUCKING BUSINESS.