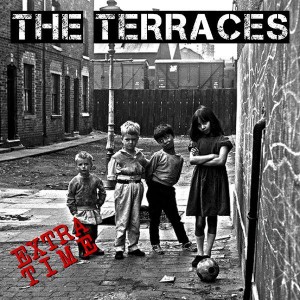 ‘Britannia’ attacks in a very old school punk way – for those already familiar, it’s classic Terraces – where behind the snarling, and overdriven rhythm guitars, there’s a great chorus fighting its way out.  Cries of “God save The Queen” celebrate traditional Britishness in a way that other overseas punks just love doing (hey, bands on Hellcat Records, we’re looking at you), but it’s all well meaning.  Perhaps better than a couple of cuts on the LP, this sets the EP’s best Doc Martened boot firmly in place, but there better to come!  ‘Who You Looking At’ is a hard rockin’ stomper driven by drummer Henry Hollingsworth.  Staccato guitar riffs combined with a harsh chorus designed for shouting along to creates something that is almost unforgettable once it has been heard a couple of times.  During the quietest moments, Gary Buckley’s English snarl has a big presence, but as confident as the ex-One Way System man’s performance is, it’s when the band go all out and crank the volume knob their best results are achieved.  Although fused with rock elements, at the heart of this tune there’s more of a tribute to the old-school punk, that’s very well executed. Although intended as rousing and fun, let’s just hope that this – combined with The Terraces’ insistence of advertising themselves as “Punks of Mother England” – isn’t enough alone to get a few brainless EDL-empathising idiots over-excited.

The best of the three previously unheard tunes, ‘Billy’ owes a debt to Cock Sparrer with its brilliant trashiness.  Aside from the Sparrer shoutiness, you’ll find a touch of Sham 69 jostling alongside various other anthem-driven bands. While its certainly the best tune this time out, it doesn’t have so much of a chorus; the big hook is supplied by a simple lead guitar part that evokes “O Come All Ye Faithful”, perhaps deliberately, perhaps not.  While all of the hooks are a nod to punk’s past, the huge production budget gives things a slightly broader appeal.  In short, this is The Terraces at their finest – the sound of a band that exudes enthusiasm at all times.

As for the two re-recordings, you could ask yourselves if there was any point in re-recording material still so fresh at the time of this release?  Aside from introducing bassist Kingy (of Rose Tattoo fame), the 2013 recordings of ‘Care About Nothing’ and ‘The Hustler’ are more assured.  Far less subtle than it’s earlier counterpart (subtle, of course, being a relative term), the re-recorded version of ‘Care About Nothing’ cranks up the guitars and the vocals, while simultaneously dispensing with the Snuff-style organ which coloured parts of the original.  Stripped down and more basic, yes, but possibly better for it – it represents a closer approximation of a live-sounding band. Previously, in a minute and a half, ‘The Hustler’ was a good, punchy musical statement, but allowing for a vastly superior production job – where a fuller sound does not compromise on the overall urgency – it’s now a great, punchy musical statement.

The Terraces may not match the youthful sneer of Strummer and Jones back in ’77, but the well rounded sound of their recording of The Clash’s ‘Complete Control’ shows them off to be excellent players.  The guitar riffs are thick and slightly metallic – like Lars Fredriksen beefed up – while the rhythm section sounds particularly strong throughout.  The Terraces don’t bring anything particularly inventive to this much-loved tune, but then simple tribute is the order here – messing with one of the classic statements of 70s punk would have appeared rather churlish.

‘Extra Time’: It’s short on duration, big on attitude. For newcomers to The Terraces, it provides an accessible, bite-sized introduction; if you find yourselves liking what you hear – and those who like old-school punk almost certainly will – make sure you go back and give the debut full length a spin.  For those who liked the debut, you already know what you’re in for…and you’ll surely be glad of a bit more.